“We recount our small act of resistance here because we think there may be lessons for the wider academic community.”

That sentence is from a blog post by the former editors-in-chief of the European Law Journal (ELJ), Joana Mendes (Luxembourg) and Harm Schepel (Kent), announcing their resignation, along with the resignation of all eight members of the journal’s board of editors and all ten of the journal’s advisory board members. 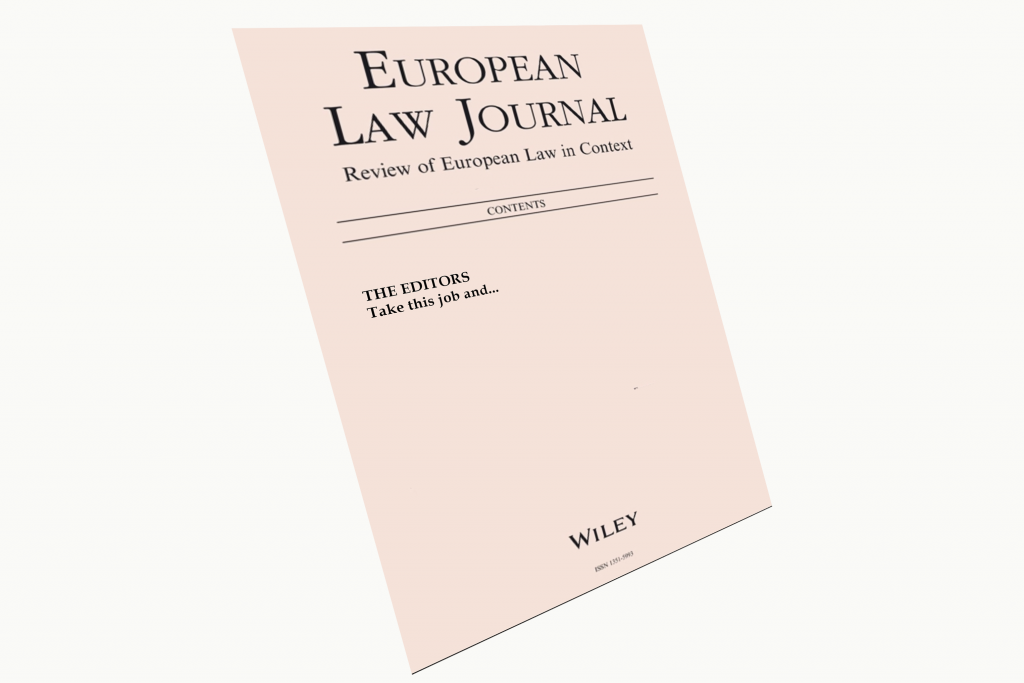 They are resigning over conflicts with the journal’s publisher, Wiley, regarding how the editors of the journal should be chosen:

In 2018, Wiley sought to appoint Editors-in-Chief without as much as consulting the Board of Editors and the Advisory Board, in a process both unfair to the prospective, excellent, new editors and in complete disregard of the integrity and autonomy of the academic community gathered in the Boards. The new editors withdrew, and the Boards resigned in protest. Wiley finally relented and agreed on an open competitive process administered by a committee of Board representatives leading to an appointment by mutual consent of the publisher and the committee. In the end, our recent negotiations with Wiley broke down on our one necessary if insufficient condition for agreeing to new terms: to simply have this process formalized in our new contract. It is a modest point, but one of vital importance: it clears the way to a model where Editors respond to the Board, not to the publisher, and where Editors work for the journal, not as remunerated contractors for the publisher. In other words, it is a fundamental condition for safeguarding academic autonomy.

The editors acknowledge that Wiley had the legal right to act as it did, as the owner of the journal:

It has the rights to the title and associated proprietary paraphernalia, and it controls access to content. It operates the ELJ much as it and other commercial academic publishers operate other journals. It appoints and employs editors as ‘contractors’ who then organize and manage the free labor of authors and reviewers of submissions.

But they claim that this standard organizational arrangement doesn’t fit with how they see the value and purpose of their work:

[Note: the foregoing list of journals originally named some that are no longer published by Wiley. Thanks to the readers who pointed these errors out.]

One correction: Phil Quarterly is published at OUP and no longer at Wiley.Report

Another correction: Hypatia is now published by Cambridge University Press.Report

So a question: What are the rules here when it comes to journals, copyrights, etc.? Why can’t all of the board members go to some sort of open access online version of this journal? What is preventing others from doing that? Is it that the publishing companies own the journals? Can all of the editors not simply create another journal with the same or similar title? How can we as academics facilitate moves like this?Report

>> Can all of the editors not simply create another journal?

Sure, though it’s not clear how simple that is. And better not to use the same title so as to avoid confusion, even if there are no legal prohibitions from doing so. This wouldn’t mean getting access to back issues, though. Wiley has all those rights, if ELJ is a traditional setup where authors sign away all the rights that matter. So there would be no continuity with a new journal. It’d be starting from scratch. (Wiley could sell the back issues, its title, and deliver ownership to a new group of folks who’d want to run it. But you can imagine that’d be expensive. It’s probably not on the table with ELJ, anyway, given the circumstances.)

Say there is interest in starting a new journal altogether — one without a gulf between the interests of the publisher/funder, on the one hand, and those of the editors, board members, authors, and readers on the other. Better yet if the new venue is fully open access and free of author charges (most OA is anyway). That’s exactly what Glossa did when Lingua turned sour a few years ago. So it happens.

Of course, starting a new journal isn’t easy. The aim is to start one that lasts, or it ought to be. Financial backing from a cooperative partner is key in all of this. (Emphasis on cooperative: one that cares about the journal’s governance and agrees that a scholarly journal should be led by scholars.)

Take Glossa again as an example. The Open Library of Humanities and LingOA provide financial support, and Ubiquity Press provides the platform and infrastructure. (OLH has a totally different business model than Wiley, Elsevier, Taylor & Francis, etc. Check ’em out.)

And for another, more recent example I continue to be excited about, take the Journal of Modern Philosophy. This one is just plain new, rather than having a migration story, at least as far as I know. Aperio Press is the publisher, which is a Ubiquity partner. JMPhil is run by philosophers. It’s totally OA, fee-free, and sponsored by the Center for Humanities at Boston University as well as BU’s and the University of Virginia’s philosophy departments. It’s got longterm preservation in mind. It’s indexed by PhilPapers. And so on.

(There are other, simpler ways to start an OA journal, too.)

>> How can we as academics facilitate moves like this?

I’m a librarian, so I can’t speak to what you can do as philosophers. But, if I may, I strongly encourage you talk with the librarians at your university, especially if there are any scholarly communication librarians, open-access specialists, or copyright experts on staff. At the very least, they’ll be able to put you in touch with individuals and networks you may not already know about.

Librarians are deeply concerned with the future of scholarly publishing, as you can imagine. Even if our interests here aren’t identical, they’re surely harmonious.Report

Thanks for the thoughtful response!Report