The annual “Night of Philosophy & Ideas” events will be taking place around the world over the weekend of January 31st – February 2nd, 2020.

In over 200 locations around the world, these events will bring philosophy and various intellectual and artistic pursuits to the public in the form of an overnight party. 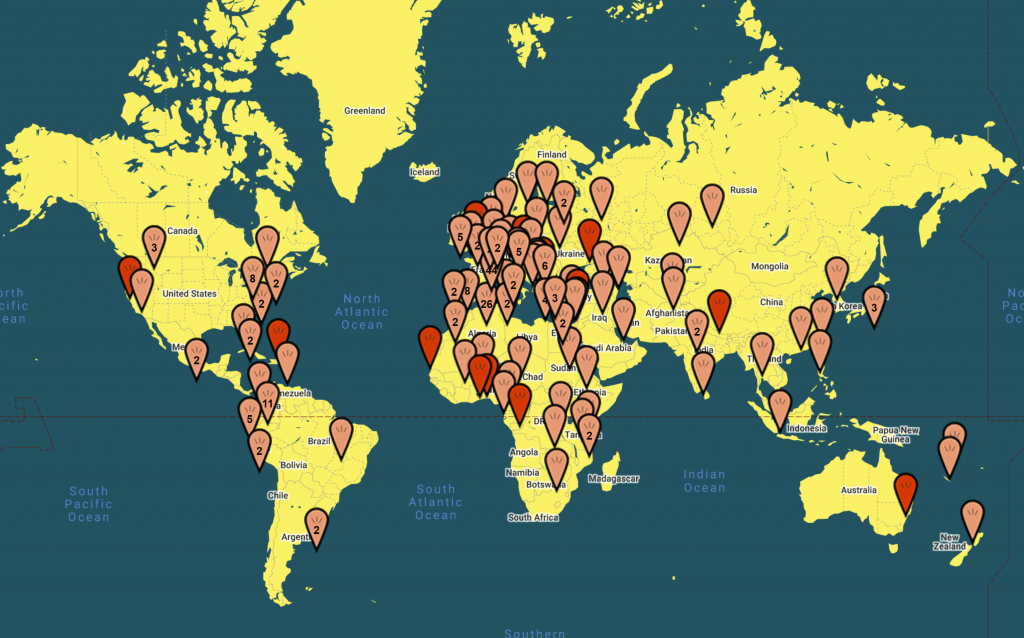 Locations of the 2020 Night of Philosophy & Ideas Events.

You can search to learn more about the events taking place near you here.

The one taking place in Brooklyn, NY, starting on the night of February 1st, bills itself as “an all-night marathon of philosophical debate, performances, screenings, readings, and music.” It’s free and open to the public.

There’s more than just talks at this, as you can see from its schedule. In the words of Peter Catapano, it’s somewhat like “an intellectually ambitious circus”.

There’s also an op-ed contest associated with a workshop taking place at the Brooklyn event:

At this workshop and live reading, Peter Catapano will discuss the behind-the-scenes process of editing the New York Times philosophy series, The Stone, and introduce the finalists of the Library’s philosophical op-ed contest, who will read their work. Catapano will reveal the selection and editing of the winners, and take questions. To enter the contest, submit an op-ed of 750 words or less by Jan. 30 to [email protected]. Winners will be notified by email by Feb. 1. Contestants are encouraged to read examples from The Stone before submitting.

Mr. Catapano adds, “While there is no age limit, I think this could be fun for students, and am hoping a good number of young philosophers might submit (and that professors will share the info about the opportunity with their students).”

Hello sir/ma,thank you for the information about the annual night of Philosophy and ideas taking place soon.
I am a Philosopher living in Abuja Nigeria. Please I would like to know the location of the one happening here if there is any. If there is non,i would like us to discuss the possibility of having one.
Over time,i have observed that Africa in general has been finding it difficult to solve her various societal problems possible because Philosophers and idea people have not been allowed to take their proper place in the different facet of the society.
A programme like this will actually give us room to deliberate together.
Thank you as I look forward to hearing from you.
IgweOlisa Sunday NebeOlisa-Igwe(ISN) * Human development Philosopher/researcher/theorist/consultant * Propounder: “Reminiscencing-transcedency theory”
(NebeOlism-Igweism) *Founder & president at: “The Integrity Organization ( http://www.theintegritynetwork.org ) * Global Peace Ambassador at: ( http://www.hwpl.kr ): – Publicity Ambassador of peace(PAP) – Messenger of peace (MP) (For world wide peace and ceasation of war): Writes from Abuja,NigeriaReport

This all looks great! I like Peter Catapano’s description, “an intellectually ambitious circus”!
How about “the Super Bowl of Philosophy,” since it is being held Super Bowl weekend?Report

I’m still looking for philosophers for the part of the Brooklyn NOP I’m organizing. Email me (firstnamelastname @ gmail) if you’re interested!Report

Such event will address leadership challenges and the underutilization of philosopher kings in Africa. I agree with Olisa in his submission. Let us have such event here in Nigeria. I am residing in Calabar but I would not mind to attend such event at any location in Nigeria. We look forward for such opportunity if there is none. Thank you.
Anongu Iorhen Moses. A research assistant, University of Calabar-Calabar, Nigeria. Propounder of Swemism.Report