The Sanders Lectureship is an honor awarded to “a distinguished scholar in philosophy of mind, metaphysics, or epistemology who engages the analytic tradition.” It is sponsored by the Marc Sanders Foundation. 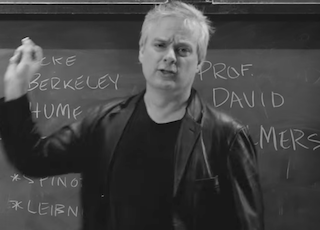 is best known for his work on consciousness, including his formulation of the “hard problem” of consciousness. Also well-known is his work on “the extended mind,” the idea that the technology we use (e.g. smartphones and the internet) can literally become part of our minds. His work on language, metaphysics, computation, and artificial intelligence has also attracted much interest. He is co-founder and past president of the Association for the Scientific Study of Consciousness, and is co-director of the PhilPapers Foundation. He has published three books: The Conscious Mind, The Character of Consciousness, and Constructing the World.

In addition to lecture itself, which Professor Chalmers will deliver at the 2020 Pacific Division Meeting of the APA in April, the award includes a $3,500 prize and the coverage of expenses related to attending the meeting.

You can view a list of previous winners of the Sanders Lecture here.

On a related note, David Chalmers was a guest on a recent episode of the 80,000 Hours Podcast. This episode of the podcast itself isn’t 80,000 hours long, but it is nearly 5! I expect that his Sanders Lecture will be a bit shorter than that.Report