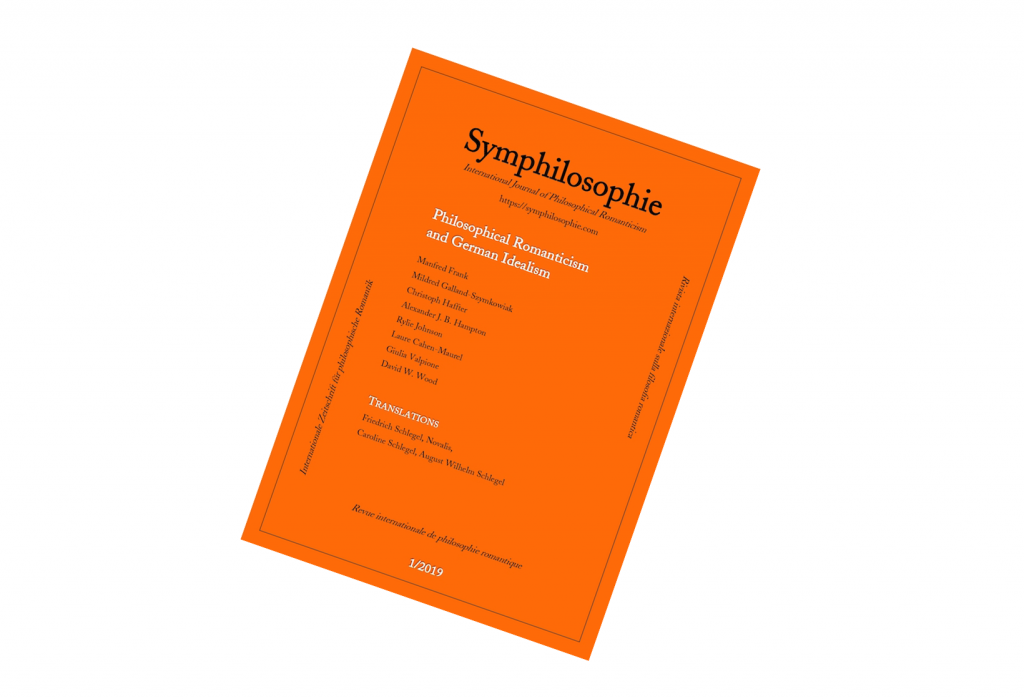 Symphilosophie is an online, open-access, and peer-reviewed journal on the subject of philosophical romanticism. It welcomes submissions in English, French, German, and Italian. In addition to new research, it will also publish new translations, book reviews, and notices of events.

The primary focus of the journal is the philosophy of Frühromantik or Early German Romanticism. The editors add:

Accordingly, the authors especially to be treated are the principal thinkers of romanticism: Friedrich Schlegel, August Wilhelm Schlegel, Novalis (Friedrich von Hardenberg), as well as philosophical writers like Hölderlin, Friedrich Schleiermacher, August Ludwig Hülsen, Ludwig Tieck and K. W. F. Solger. These thinkers are to be considered from the different philosophical perspectives present in their works: e.g. in terms of epistemology, metaphysics, nature, ethics, aesthetics, anthropology, history, politics, religion, and so on, and/or in relation to other philosophical streams and figures such as Plato, Spinoza, Kant, Fichte, Herder, Hemsterhuis, Schelling, Hegel etc. Symphilosophie also accords an important place to the writings of the female thinkers of romanticism, including among others: Caroline Schlegel, Dorothea Veit, Karoline von Günderrode, Sophie Mereau, Bettina von Arnim, or Madame de Staël.

In the spirit of the transdisciplinary and interdisciplinary work that is one of the hallmarks of romanticism, submissions to Symphilosophie could also concern European romanticism and analyses beyond the frontiers of philosophy as such, i.e. interconnections with literature, linguistics, the arts, music, medicine, or geology. Nevertheless, the research should still have some kind of relationship to philosophy. Symphilosophie also publishes articles dealing with the historical reception of philosophical romanticism or the relation of this intellectual current to contemporary figures and movements.

The journal will publish one issue per year. The inaugural issue is here.