Students at the University of Texas, Austin marched into the classroom of philosophy and biology professor Sahotra Sarkar yesterday, calling him a “predatory professor” and protesting that the university failed to sufficiently hold him accountable for earlier misconduct. 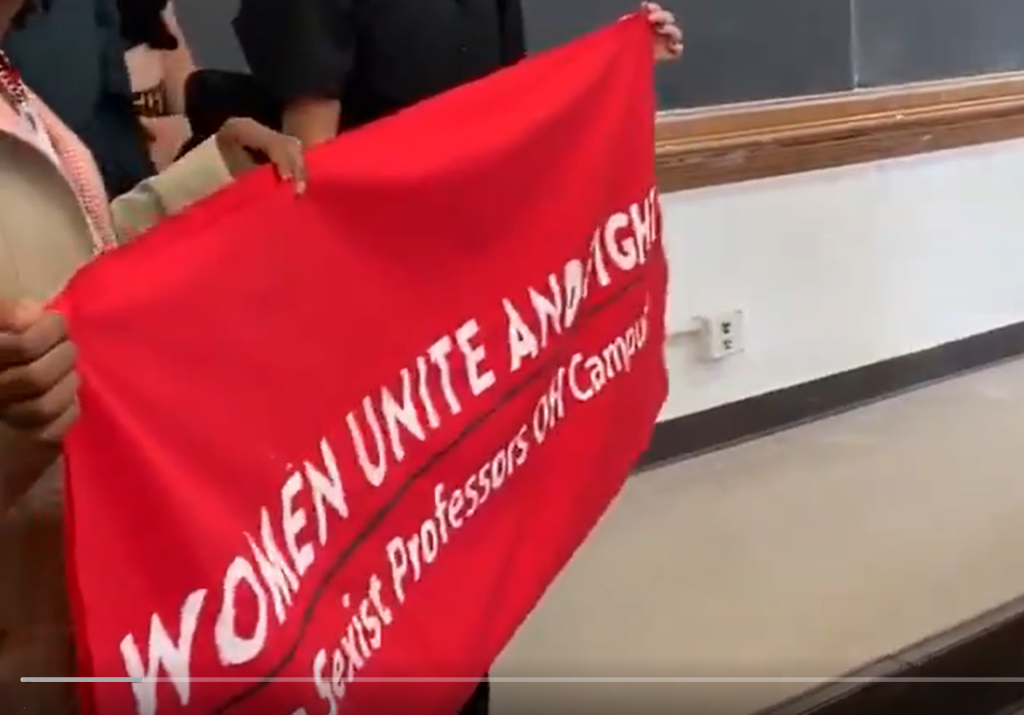 An image from a video of the protest.

The students, organizing under the name “Fire The Abusers,” entered Sarkar’s class while it was in progress and stood in front of the classroom holding a banner as one of them spoke, describing allegations of sexual misconduct against Sarkar, complaining about the university’s handling of the complaints, and calling for students to take action. Sarkar does not respond to the protesters, but is seen on the video making a call, possibly to campus security, which reportedly showed up after the protesters had left the classroom.

You can see videos of the event here.

According to an article last year in The Chronicle of Higher Education:

Sarkar was found responsible for violating Title IX policy after complaints that he propositioned students to pose nude for photos, among other things. He was placed on paid administrative leave while the complaints were investigated, in 2016, and then he was suspended for a semester, public records show. Sarkar… denied the allegations [and] said in an email that… years had passed since the complaints, one of which dated back to 2000.

According to the Austin American-Statesman, “in a memo to the provost, Sarkar denied many of the allegations, although he admitted discussing the possibility of one of the complainants posing nude as a paid model.” (See also this.)

One of the protestors told local ABC News affiliate KVUE:

The students and the women are upset and are, essentially, fearful of people like him, continuing to work at UT… We are not just going to continue to hide in the shadows and beg the university for transparency. At this point, we want to make it such that the professors see it as their obligation to resign or quit their position.

The University of Texas, Austin administration released a statement in response to the student protest, according to CBS News:

The university respects students’ freedom of speech and right to demonstrate, but speech cannot impede the mission of the university. As outlined in the Institutional Rules on Student Services and Activities, ‘no speech, expression, or assembly may be conducted in a way that disrupts or interferes with any teaching, research, administration, function of the University, or other authorized activities on the campus.’ Students involved in disruption could be subject to disciplinary action.

The protest followed the publication, last month, of an editorial in the school’s student newspaper, The Daily Texan, that called for students to “stand together as a community to protect ourselves and our peers” from professors who “have committed sexual misconduct against students.” According to that editorial, there were 44 reports of sexual misconduct filed against faculty and staff at UT Austin during the 2016-17 school year; six of the reports led to findings of violations of university policy.

(Thanks to several readers for bringing news of this protest to my attention.)