I do take seriously Heidegger’s claim that some of his key philosophical ideas provided the basis for his political commitments. I have tried to understand how he might have conceived of those connections and to trace some of his efforts to develop those lines of thought. I don’t think that this renders his philosophy irredeemable but neither do I think that one can afford to ignore just how dangerous his enmity to Modernity is.

That’s Mahon O’Brien, senior lecturer in philosophy at University of Sussex, in an interview with Richard Marshall at 3:16. Dr. O’Brien objects to those who use Heidegger’s Nazism as a reason to not take his ideas seriously, but just as objectionable are those Heideggerians who deny or downplay the Nazism, both in his personality and in his philosophy:

A further challenge for someone like me, who wants to try and face up to Heidegger’s Nazism and deal openly with the fact that he himself insisted that the motivation for his political commitments and activities lay in key elements of his philosophy, is that one has to contend as well with a number of Heideggerians who refuse to acknowledge that there is a genuine problem here.

Again, we can divide these types of Heideggerians up into different categories. There are the ‘flat Earthist’ types (they are not as common anymore, but they do exist); they insist that Heidegger was neither a Nazi nor an antisemite and are quick to try and suppress any discussion of this issue. Then there are Heideggerians who grudgingly acknowledge that the former attitude is unreasonable but that want to pretend that the links between the philosophy and the politics are negligible and that, besides, we’ve heard all of this before, the matter has been dealt with and it’s time to move on. This is a slightly more sophisticated strategy of denial—there is a kind of implicit appeal to authority designed to suggest to someone like me that one cannot be a serious and/or sufficiently sophisticated reader of Heidegger if one thinks that this is something that is even worth a fraction of the time and effort devoted to it.

It is, after all, Heidegger who repeatedly tries to find ways to connect his views concerning the Jews, Jewishness and Judaism to his core philosophical ideas. It is Heidegger himself who insists to one of his former Jewish students, Karl Löwith, that Löwith was entirely right in his assessment of Heidegger’s reasons for committing himself to the Nazi party. That is to say, that Heidegger believed that his own vision of National Socialism for Germany was something which was consonant with some of the key elements of his philosophy. What I just cannot understand here is why some Heideggerians become so incensed when anyone tries to examine these issues as though Heidegger is some innocent victim in all of this. It is Heidegger himself who wrote, said and did all of the things that require an explanation at the very least. Where is their anger at Heidegger for agreeing to be the obscenely overzealous Nazi rector of Freiburg University? Why not hold him to account for writing private, incriminating letters against fellow academics – citing their relationship to Jews as something to count against them? Why is it anyone but Heidegger’s fault that he hero-worshipped Hitler in public speeches and addresses, that in private seminars he was willing to say that semitic nomads could not be part of the new German nation? Where is their outrage and disgust at the fact that in notebooks that he hoped to have published posthumously we find him trading in some fairly repugnant antisemitic stereotypes and trying to weave these into the theoretical tapestry of a philosophy that many people count as possibly the most important of the twentieth century? 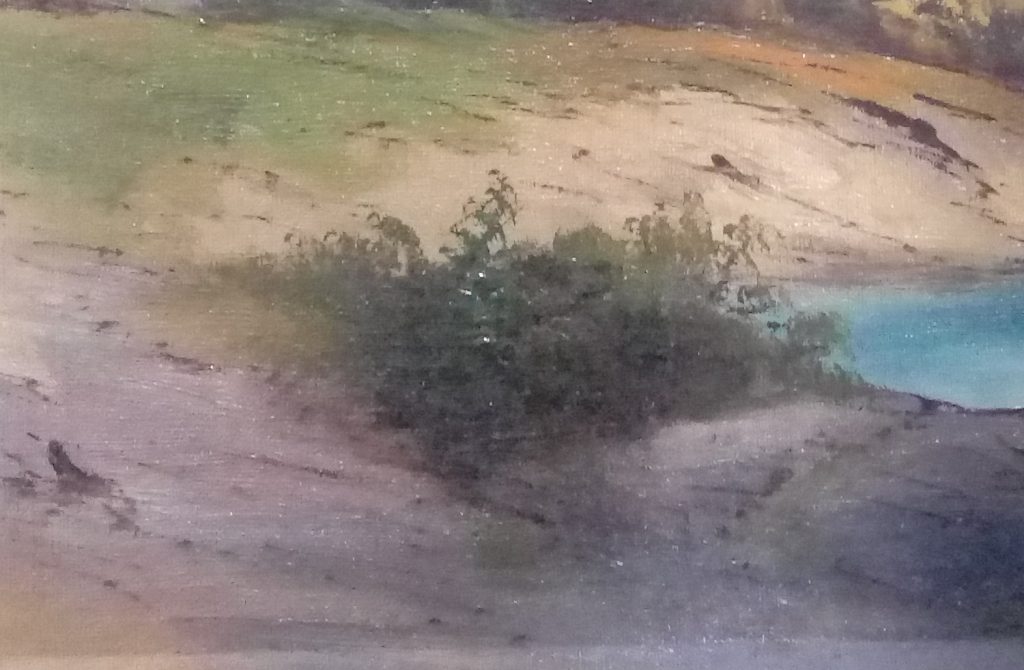 Adolf Hitler, “House at a Lake with Mountains” (detail)

Any confusion over Heidegger’s worth as a thinker, or the connection of his ideas to anti-Semitism and Nazism, is owed to… Heidegger:

The culprit is Heidegger. Heidegger is responsible for all of this confusion. He’s not a saint, or some misunderstood martyr. He wilfully tried to find a way to link some of the most extraordinary philosophical insights of the twentieth century to the rhetoric of National Socialism for a period of time.

I became enchanted with Heidegger and his Being and Time, and I still think very highly of it: there are only five or six books like this in the history of philosophy. I think that any philosopher that takes the time and makes the effort to read that work carefully simply has to acknowledge the staggering philosophical profundity and originality of that text.

Perhaps this is an unfair reaction to the interview (which I read very quickly, more skimming than reading) and quite possibly I missed something, but O’Brien keeps saying there are certain connections between Heidegger’s philosophy and his politics — a position that seems (to an ignorant outsider) very reasonable — without ever really spelling out what those connections are (except for a brief discussion of section 74 of ‘Being and Time’). Presumably O’Brien does spell out the connections in his books but he does not seem to do that in this interview. If I missed a key passage or passages on this point, I’m sure someone will tell me.

Also, a minor point: O’Brien refers several times to “Wolin” — no first name. At first I thought he meant the late Sheldon Wolin (political theorist and historian of political thought) but then I realized he must be talking about the historian Richard Wolin. Perhaps there is something of an insider-ish feel to all of these 3:16 interviews but this one seemed to have a bit more of that feeling than most.Report

A Canadian Adjunct
Reply to  Louis

I have not read O’Brien’s books, though they do seem interesting. FWIW: One Heidegger scholar I know to have carefully analyzed the connections between Heidegger’s Nazism and antisemitism and his philosophical work is Donatella di Cesare, e.g., in _Heidgger and the Jews: The Black Networks_, which I have read.Report

Louis
Reply to  A Canadian Adjunct

To say I’m no expert on Heidegger is not at all an exaggeration. (I’ve read _Being and Time_ and a handful of essays, and a modest amount of commentary, but most of that several years ago.) And, though I can see how we might make a non-crazy connection between his views about meaning and the nature of being human and a sort of comminitarianism that can turn very dark quickly, I am skeptical that we should take Heidegger’s claim that there is a deep connection between his formal philosophical views and his naziism all that seriously. I don’t doubt that _he_ believed that there was a strong connection between his other philosophy and his political views, but lots of philosophers believe that about their own views, and they are often wrong.

For example, I’m reading David Brink’s very good book on T.H. Green. Green believed that there were deep connections between his absolute idealist epistemology and metaphysics and his moral and ethical views. But, while Green’s views are pretty interesting and much more admirable than Heidegger’s, they were also fairly normal late 19th century liberal views, even if of above average sophistication. So, his absolute idealism was neither necessary nor sufficient for his political views. (Bradley had similar epistemic and metaphysical views and much more communitarian political views, for example.) My own view is that most metaphysics and epistemology is irrelevant for political thought, and that people are mostly lead into confusion by thinking its important, even philosophers. So, even if Heidegger thought there were close connections, we shouldn’t at all assume that this means there actually are such connections.Report