Miguel León-Portilla, emeritus professor at the National Autonomous University of Mexico (UNAM) and “the world’s foremost authority on Náhuatl philology and philosophy,” has died. 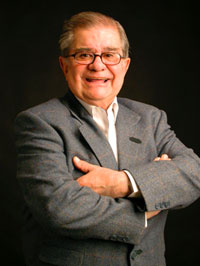 Professor León-Portilla was known for his philosophical, historical, anthropological work on, and his translations of, Nahuatl philosophy, history, and literature, producing hundreds of articles and nearly fifty books.

He joined the faculty of UNAM in 1957. The many honors he received over his long career include a Living Legend Award from the U.S. Library of Congress, the Belisario Domínguez Medal of Honor (the Mexican Senate’s highest honor), the Elías Sourasky Award (a national award for work in the social sciences), a Guggenheim Fellowship, and “countless” honorary doctorates. From 1987 to 1992, he was Mexico’s delegate to UNESCO,

In an obituary published at the UNAM site, León-Portilla is credited with “giving voice to the vanquished,” beginning “a movement to understand and revalue the literature in [Nahuatl], not only that of the pre-Columbian era, but also the current one, which is spoken by more than 1.5 million people.”