The award includes delivering three lectures open to the public, the opportunity to publish the lectures in the Romanell Lectures Series from Oxford University Press, and a prize of $7,500. It is given annually to scholars working in philosophy to recognize “not only distinguished achievement but also the recipient’s contribution or potential contribution to public understanding of philosophy.”

The award was established in 1983 and is named in honor of Patrick Romanell, H.Y. Benedict Professor of Philosophy at the University of Texas, El Paso, and his wife Edna Romanell. It is sponsored by the academic honor society Phi Beta Kappa.

Professor Zack will be delivering her lectures at Lehman College. 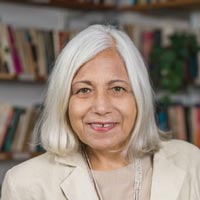 A press release about the award states:

Dr. Zack has researched and written on a variety of topics, notably in the areas of race, political philosophy, feminism and disaster ethics. Her most recent book is titled Reviving the Social Compact: Inclusive Citizenship in an Age of Extreme Politics (2018). She has published nine books and edited five anthologies, including the Oxford Handbook on Philosophy and Race (2017). Dr. Zack recently joined the faculty at Lehman College, moving from the University of Oregon, to focus on the opportunity to teach undergraduate members of under-represented groups and support their candidacy for post-graduate degree programs.

In the past few years, Dr. Zack has turned her attention to the study of social intersectionality. As one colleague observed about her selection for the Romanell award: “Prof. Zack has chosen, as the topic for her lectures, intersectionality, a concept developed originally in jurisprudence to cover cases of multiple-layered discrimination or oppression, especially as experienced by women of color, usually in the workplace….I cannot think of a more timely and appropriate topic, nor one more in need of a rigorous philosophical analysis, and I cannot imagine a philosopher more equipped to provide this analysis than Prof. Zack.”

There is further information here.

Jonathan Surovell on Optimism about Metaphysics (and Philosophy in General)

The question of the role of intuitions in philosophy has been a thorny one for a long time. So I'm surprised to hear that everyone […]

Adam Groll on Optimism about Metaphysics (and Philosophy in General)

I've checked my notes and want to give more exact figures, amending what I stated above. Nevertheless, the general landscape of the CRC program is […]

Like the faculty rosters of the Canadian university in general and Canadian philosophy departments more specifically, the roster of CRC holders is disproportionately dominated by […]

It's worth looking at who has been running SSHRC for the last 10 years: Paul K. BatesChair of the Independent Audit CommitteeA Certified Professional Accountant and […]

Sorry I am late to this. What deeply frustrates me is that in my experience, the improvements there have been are largely on the back […]

Your experiences seem to be similar to mine. I wish I had some useful advice for you. If you're like me, you'll adapt to working […]

Speaking of Rawls, one might mention the friendship or connection between him and H.L.A. Hart (see, e.g., Forrester, In the Shadow of Justice, p. 22);

Amy Schmitter on Philosophy Enrollment Grows -- a Little -- in Canada

It’s kind of amazing that we at the U of Alberta have grown so much, although the period just before the times cited above may […]

Oh, man, this one hurts — Aryeh was a large part of why I got into philosophy. I took his (year-long) historical Intro Phil class […]