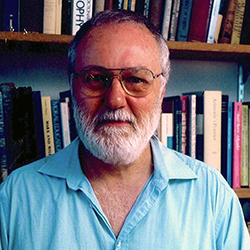 In a post about him, Eric Schliesser (Amsterdam) writes: “André had firm views about what counts as philosophy that I sometimes thought too traditional. But once an issue was being analyzed, one could not imagine a gentler and more encouraging companion in shared, all-absorbing philosophical inquiry.”

You can learn more about Professor Gallois’ work here.

André was a terrific philosopher and someone of great warmth and sincerity. I’ll miss him tremendously. I was his colleague for five years and I’m indebted to him. He had a down-to-earth and open personality, humorous and approachable. But what a philosophical mind! André explored lengthy and labyrinthine lines of original reasoning: as the options mounted up and André ticked them off, you were led further and further into philosophical thickets. Sometimes André would conduct two explorations simultaneously: the two explorations would somehow meet up after many twists and turns with a deeply surprising common conclusion. After I’d set out some ropey pitiful idea of my own, André would routinely announce, ‘Let me review the dialectic.’ This was the prompt for him to unstitch all my reasoning, take us back to first principles, and then finally head off in some striking new direction. Suffice to say that this was a very lengthy process. It was humbling and fascinating to talk with him. He’d such an original, penetrating mind and he was such a good friend. André was the best.Report