“Independent scholar finds new John Locke manuscript” was the tag on an entry in the Heap of Links a couple of weeks ago. Since then, several publications have covered the story. New Locke is hot news, apparently. 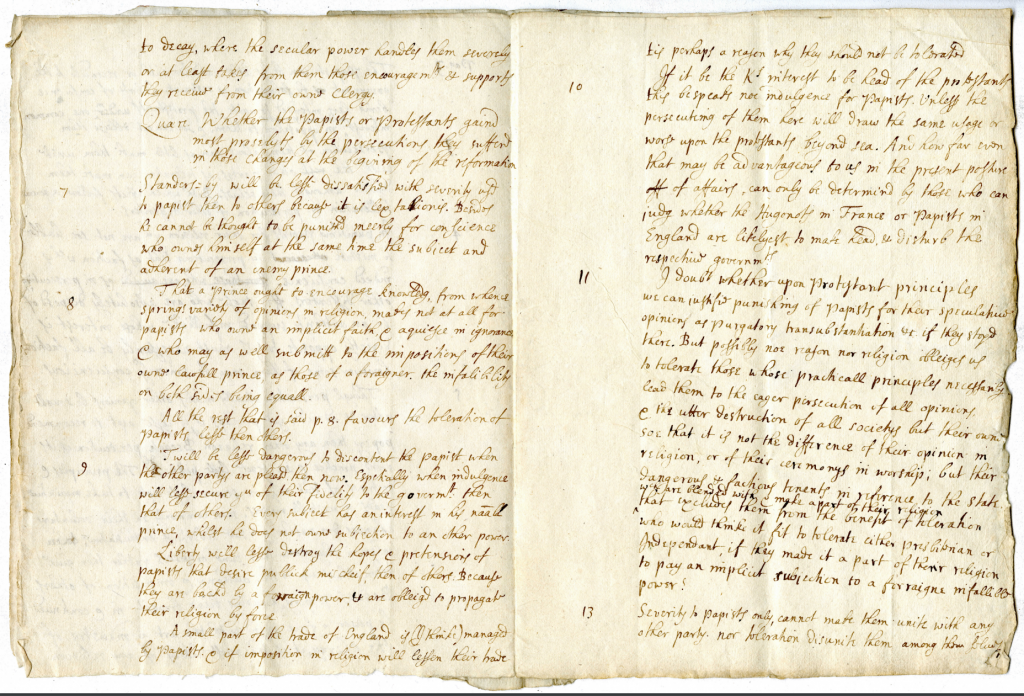 pages from the manuscript, “Reasons for tolerateing Papists equally with others,” by John Locke

The manuscript, “Reasons for tolerating Papists equally with others,” was unearthed by J.C. Walmsley in 2015 in the archives of the Greenfield Library of St. John’s College in Annapolis, Maryland. An account of the discovery was provided in a recent press release from St. John’s college, and Walmsley and Felix Waldmann (Cambridge) wrote about it in article in The Historical Journal.

The manuscript itself, handwritten by Locke, has been digitized and is available here.

The press release states that “the manuscript essentially consists of two lists: the first, a set of reasons for tolerating Catholics, which at the time simply meant not actively persecuting the group, and the second a list of reasons not to (which is his much wider-known opinion). According to Walmsley, the manuscript is directly connected to Locke’s Essay concerning Toleration, and, he says ‘was most likely its immediate antecedent and inspiration.'”

The discovery has been getting a fair amount of press. Articles about it have already appeared in The Wall Street Journal, The Guardian, The Baltimore Sun, Smithsonian Magazine, Spiked, Publico, and France Culture. [Update: Kenan Malik writes about the manuscript in The Guardian: “let us celebrate a great historical find in the new Locke manuscript. But if we want to address questions of tolerance we would do far better to look to Spinoza than to Locke” (via Oran Magal). Update 2: The story makes The Washington Post.]

The Wall Street Journal article, by Jason Willick, an assistant editor at the paper, was one of the first to appear, and it lamented the lack of attention the manuscript was receiving. “It’s an indicator of how far Locke has faded from view that the discovery of an original Locke manuscript has so far gone without mention in the major press,” Willick wrote.

It is unclear when this supposed golden age of U.S. culture was, in which journalists would immediately, excitedly, and widely report on the discovery of relatively minor philosophical manuscripts by Locke—or by any philosopher, for that matter—and to which our own time so unfavorably compares. If you have evidence that it ever existed, please do share it in the comments.

I don’t think Locke has faded much from view, nor have most other figures in the history of philosophy. I think that with a more patient outlook, with an unromanticized account of the past, and with a heap of other evidence we can keep in mind, we might come to a different view of our era: that today there is more media interest, and more public interest, in philosophy than at any other time in human civilization—and this includes historical figures such as Locke.

The Golden Age of Philosophy in American culture must have been when I was a kid in the 1950s. I recall the George Burns and Gracie Allen often used to discuss the stoics, while Sid Caesar focused on the Scottish Enlightenment. Things died down in the 1960s, though. Television was a promising philosophical venue at the start of the 1960s. Johnny Carson gave a lot of attention to the existentialists when he started hosting the Tonight Show. The monologue often featured jokes about Camus and Simone de Beauvoir, but his interest waned, and after philosophy disappeared from the Carson monologue, things dropped off on the other shows as well. You saw the same trajectory on series. In the early days of Bonanza, for example, Ben Cartwright would often talk with his sons about the philosophers of the 1800s when the show was set, but that dropped off after season three when they got into a huge running debate with the chef when he tried to bring the Neo-Confucians into the picture. On Rawhide, Rowdy Yates and the other hands would often choose a philosophical topic to contemplate over their coffee at the chuck wagon. My best memories of that show involve Rowdy’s spirited defence of Emerson and the Transcendentalists. Jason Willick has a point concerning current trends in the newspaper press. If you read old issues of the Wall Street Journal, there used to be a lot of interest in philosophy. The Journal serialised the first edition of Whitehead and Russell’s Principia Mathematica, and it gave a lot of attention to the later Wittgenstein during the post-War economic boom. I guess Willick is trying to rekindle the glory days when philosophers measured their impact by how many column inches they’d get in the Wall Street Journal.Report

You win the internet for the day.Report