In “What Is This Thing Called Philosophy of Science? A Computational Topic-Modeling Perspective, 1934-2015,” forthcoming in HOPOS: The Journal of the International Society for the History of Philosophy of Science, authors Christophe Malaterre, Jean-François Chartier, and Davide Pulizzotto (Université du Québec à Montréal) argue that their method complements other current historical approaches.

They say their methods make it possible to “comprehensively analyze the semantic content of large corpuses of full-text documents, thereby providing an empirical basis for content-related studies, be they synchronic or diachronic.” As for what they learned, and how, they write:

we apply these methods to the complete full-text corpus of Philosophy of Science from its very start in 1934 up until 2015 to empirically investigate which research questions philosophers of science have been concerned with and how these questions evolved in the last 82 years. By applying topic-modeling algorithms, we identified 126 key topics that were present in the journal articles during this period. We also analyzed how these topics evolved in significance over time. Our findings concur with well-known episodes in the history of philosophy of science, such as the rise and fall of logical empiricism (1930s–1970s), but they also document other trends, such as the strong appearance of a philosophy of biology in the 1980s and mostly in the first decade of the 2000s as well as the emergence of a significant interest in models and simulations in the 1990s…

These 126 topics show a great diversity of interests exhibited by philosophers of science, ranging from questions about logic and philosophy of language to issues that are usually thought of as more metaphysical, for example, natural kinds or causation, including also a broad spectrum of epistemological questions about induction, confirmation, and the scientific method.

Here are some more specific findings:

The following graph shows how the popularity of topics in philosophy of science has changed over the studied period: 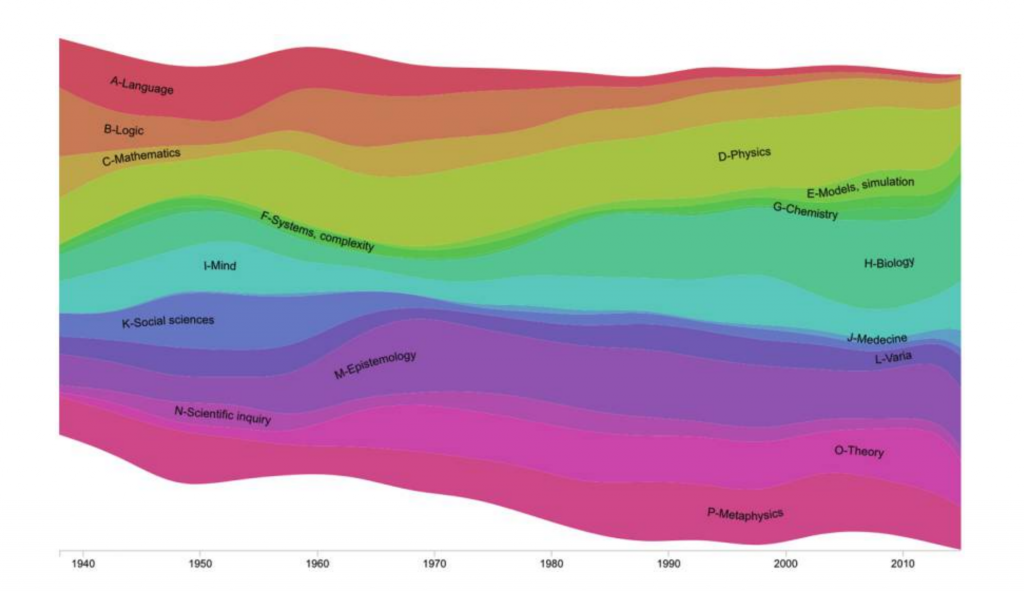 “Diachronic evolution of topic categories in Philosophy of Science, 1934–2015. The width of each ‘stream’ is proportional to the probability of each category in the corpus.” From “What Is This Thing Called Philosophy of Science?” by Malaterre, Chartier, and Pulizzotto.

Observations from the authors:

There is much more to the article, which you can read here.