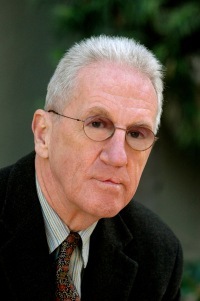 Professor Stroud was known for his work in epistemology and metaphysics, particularly on philosophical skepticism, as well as on Hume and other figures in the history of philosophy.

Stroud received his Ph.D. from Harvard University and his undergraduate degree from the University of Toronto. He took up an assistant professorship at UC Berkeley at 1961, retiring in 2016 as the Willis S. and Marion Slusser Professor of Philosophy.

UPDATE: “His body of work, his influence on generations of students, his imprint on the character of our department, the example that he set of the purest philosophical inquiry—all of it is beyond reckoning” — from a brief memorial notice posted at the UC Berkeley Department of Philosophy site.

UPDATE (8/19/19): “Rather than taking it for granted that we understand what philosophical problems are and so can set ourselves to the task of solving them, Stroud repeatedly called attention to the possibility that philosophers lack a proper understanding of what we ourselves are doing” — from a philosophical obituary for Barry Stroud by John Schwenkler (Florida State) at 3 Quarks Daily.

UPDATE (8/26/19): “…an influential thinker who challenged the prevailing attitudes of mid-20thcentury philosophy and sought to understand enduring and inescapable questions about knowledge, perception and reality” — from a detailed obituary at the University of California, Berkeley website.

UPDATE (11/7/19): A video of the memorial for Barry Stroud, including remarks from several philosophers.

He was an excellent Philosopher and will be missed.Report

I was very sad to hear this news. Barry was an undergraduate adviser, professor, and letter-writer of mine at Berkeley. We shared a number of meaningful conversations over the course of my studies there, from philosophy to music to history and art. I learned a great deal about Hume and Wittgenstein from him, and I always appreciated the support and encouragement he gave to me in pursuing my research. He cared a great deal about the discipline of philosophy as a whole, and I deeply admired his ability to engage with such a wide array of subjects spanning across our discipline (something that is harder and harder to do these days).

When I had moved across to the east coast to begin my own PhD in philosophy, I occasionally kept in touch with him, and I had the chance to visit him again at Berkeley just last year. He told me he was rediscovering the joys of having free time (having just retired, or at least semi-retired). He noted he was still looking forward to working with students. I am gutted to see this news just a little over a year later.

There are few persons that really towered in my mind when I thought about what kind of academic I wanted to be. He was one of them.Report

As a female graduate student at Berkeley from ’68 to ’74, I found Barry Stroud to be not only an inspiring teacher of David Hume, but someone who was genuinely interested in talking to students, both male and female. Taking women seriously at that stage was sadly not terribly common. Though I focused on ethics, not epistemology, I regard Stroud as a mentor and an important reason I had a wonderful career in philosophy.Report

I met Barry Stroud only a couple of times. He stood out as a philosopher with no trace of arrogance or self-importance. He wrote very well indeed, and I think his book on Hume is a model of how history of philosophy and analytic philosophy ought to go together.Report