“Uncontroversial ideas need not less but more critical scrutiny, since they generally get such an easy ride.” Those are the words of John Gardner, Professor of Law and Philosophy and Fellow of All Souls College, Oxford University, who died last week at age 54. 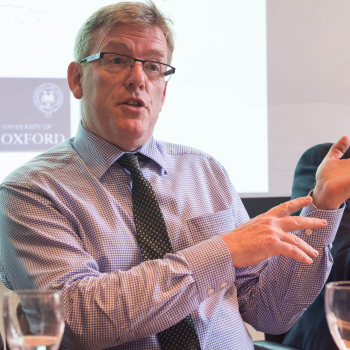 Professor Gardner worked on a wide range of topics in philosophy of law, moral philosophy, and political philosophy. Prior to becoming a fellow of All Souls, he held Oxford’s Chair of Jurisprudence, and before that he was Reader in Legal Philosophy at King’s College London, and held other positions at Oxford. His books include From Personal Life to Private Law (2018), Law as a Leap of Faith: And Other Essays on Law in General (2012), Offences and Defences: Selected Essays in the Philosophy of Criminal Law (2007), and a forthcoming book which he completed prior to his death from cancer called Torts and Other Wrongs.

Annalise Acorn (Alberta) has written an obituary for Professor Gardner, posted at Oxford University’s site, describing in detail his life and work.

His work is characterized by reverence for rationality and an abiding sense of the value of the human capacity to give reasons and take responsibility. The concept of duty played a central role in his philosophy. Likewise, he held a deep personal conviction that, not just the substance, but the joy of life lay in the fulfillment of duty… He was uncommonly generous in his contributions to college life both at Univ and All Souls. He was dedicated to his students,  meeting with them regularly even as he approached the end of his life. He was lovingly committed to his wife Jenny and devoted to his daughter Audra and his two stepchildren Henrik and Annika. He was fiercely loyal to his many friends… His influence on jurisprudence and legal philosophy in the 21st century cannot be overstated.

The obituary includes a number of quotes from Professor Gardner, including the one at the start of this post, and this one: “These days everybody wants to be a philosophical architect. But I have made a perfectly good living as a philosophical plumber.”

I just want to add that John was a gracious, bitingly funny, generous, and very intelligent man. Although John ascended to the heights of the profession, he seemed (to me at least) to take seriously anyone who took philosophy seriously, regardless of their status.

John had wide interests beyond philosophy and was a joyful conversationalist.

I was not as close to him as many people who read this probably were, but even so I have great affection for him and will miss him terribly.Report