Using data from the PhilPapers Surveys, Quentin Ruyant, a post-doc at the National Autonomous University of Mexico, has created a map showing the correlation of positions held by philosophers on different philosophical topics.

Initially I was reading Bourget and Chalmers’ paper on the survey and was puzzled that the highest correlations between positions seemed to form two correlated camps. I sketched a graph to confirm that and it became the first version of the diagram. Later on I changed the methodology so as to include all positions in the survey: I decided to include the first to third correlations of each, irrelevant of their weight. This gave rise to this new version, (and as it turns out, there isn’t really two camps with this methodology but several islands). 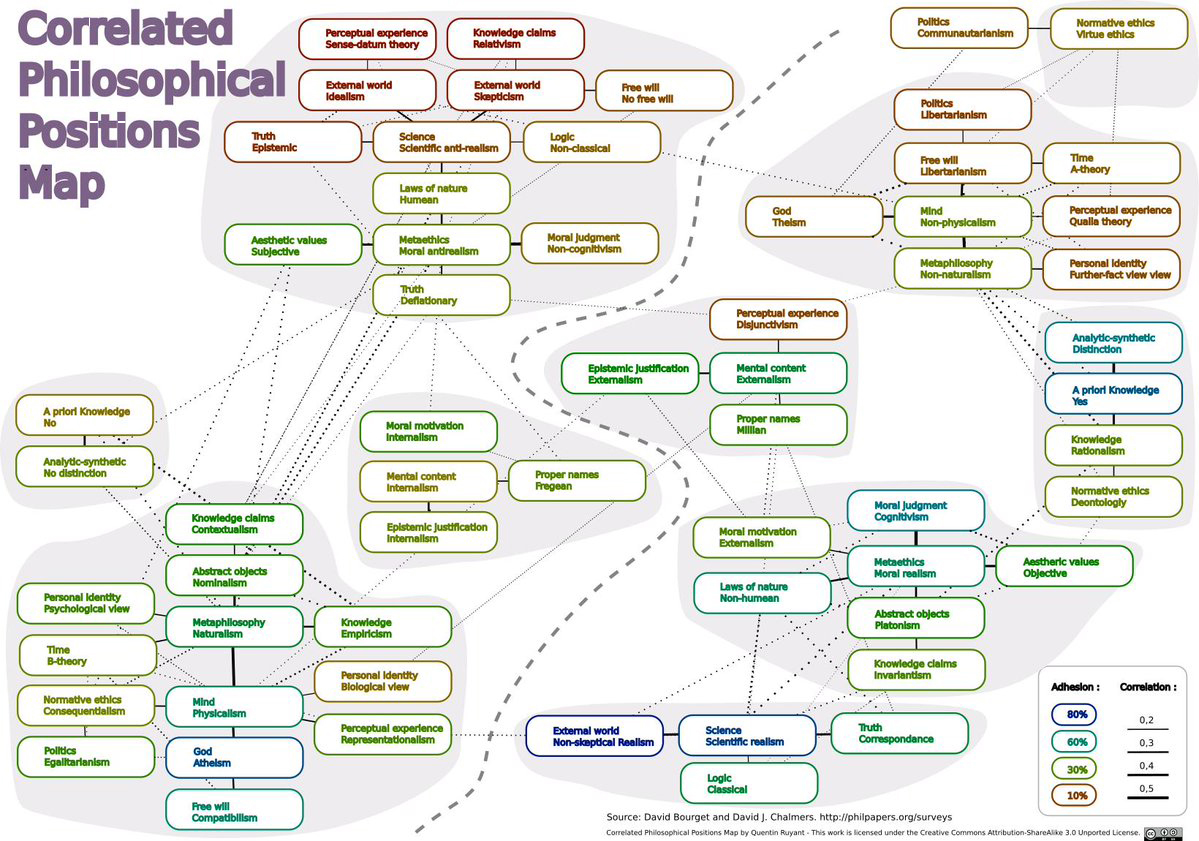 A line between two positions indicates which is the most correlated with the other among philosophers; dashed lines represent the second- and third-most correlated.

(Thanks to Andrew Fyfe for the pointer.)

Excellent work, Dr. Ruyant (and congratulations on completing your PhD!). One of the few such maps that is truly thought provoking.(I find most comparable citation count maps less than enlightening).

Thank you, also, for explicitly crediting, in the image itself, both the data source and your exemplary election of the permissive Creative Commons license, CC-BY-SA.

I will add your informative graphic to Wikimedia Commons and reference it as an external link in a couple of Wikipedia articles today.

Would you, or anyone else, care to characterize or name the ‘islands’ so delineated? Or, perhaps paradigmatic philosophers associated with such?Report

Fantastic stuff. What are the main ‘islands’ we can identify here? I’ll make a quick (pre-morning coffee) attempt –

– In the north-east, we have what looks like a “rationalist-theist” island; theism, non-physicalism, and the further-fact view about personal identity seem to capture an intuitively connected set of positions mainly held by philosophers with Christian positions. The link to virtue ethics (via e.g. MacIntyre?) is thus unsurprising.

– Finally, in the central-south, there’s an island comprising a set of positions you might broadly call “rationalist-platonist” – numerous commitments to the mind-independent reality of moral, abstract objects, laws of nature, aesthetic value, and more. I presume Kant and Plato would both make their homes here.

The big dashed line in the middle doesn’t seem to be labelled, but to my eye it looks to be loosely tracking a broadly empiricist (left) – broadly rationalist (right) division.Report

Then there’s a third dimension of content internalism-externalism in the middle.Report

Very interesting. Though I feel some dismay that egalitarianism is so divorced from theism.Report

Well done Quentin! I think you should try and name/qualify the archipelagoes 🙂 (as indicated earlier)Report

I guess the islands could be named after what seems to be the most central positions: internalism, externalism, moral realism, scientific realism, anti-realism, a-priori knowledge, naturalism-physicalism, non-physicalism…Report

Does the dependence on the survey eliminate or ignore some positions–maybe they are regarded as meta-positions–like existentialism or pragmatism, in favor of broadly Anglo-Analytic philosophy? I’m a pragmatist who found locating my positions difficult, though overall I suppose I identify most strongly with the lower left island. Just asking.Report

Pragmatism may be terra incognita from this perspective, perhaps best perceived as a buried bridge, like the Bering Strait, between analytic and continental philosophy.

The shortest path to the 30 questions themselves is at:
https://philpapers.org/surveys/oquestions.html

Thanks for your reply Paul.
I did the survey some years ago, but honestly even at that time I had not made a full-fledged move toward pragmatism. (This shows that some old dogs can learn new tricks.) Logically, for example, pragmatism seems to be a house with many mansions, accommodating in some versions classical and others non-classical forms. (I should say immediately these are my rather amateurish observations; among my publications I have none that evoke that view (except for one book review), and only one so-far unpublished one “Free Will Zombies”.) Perhaps the binary either-or form of the questions places positions like pragmatism in a tough or ambiguous place with respect to responding. I think we need more seasoned pragmatists to weigh in here instead of me.Report

This survey is just an echo of the inanity and utter popularity of Anglophone analytic philosophy. Do not look for yourself in their ranks. More on our part needs to be done to show the superiority of Continental and American philosophy. Hell, analytics still think there’s a division between the subject and the object despite Heidegger and Dewey showing clearly how it should be taken otherwise.Report

The format of the survey and the choice of questions and options certainly introduce some kind of sampling bias, which is why I wouldn’t take too seriously the “island” grouping (perhaps having one more position in the survey would have reunited two islands into one). It’s a bit like placing flags at various places in a mountainous landscape: the real landscape is certainly more complex and extended than the distributions of flags shows.

As for pragmatism, the most cognate positions to me would be: naturalism, no a priori knowledge, no analytic/synthetic distinction, and perhaps deflationary truth and moral non-cogntitivism.Report

The more I think about this map, and particularly when I consider the adherence (i.e. popularity) levels, the more it seems like a U shape, where the top half represents two minority extremes, and the bottom half the more conservative middle ground.

The two extremes (scepticism and theism) are both fairly hostile to science and hold subjective experience in particularly high regard when it comes to metaphysics. Meanwhile the bottom half middle ground views are basically tussling other whether values and abstract objects are metaphysically respectable. We might say that both conservative camps feel the pull of their respective extremes (e.g. the hardcore physicalists end up denying laws of nature, while the hardcore value realists end up denying physicalism).

There are still some anomalies- I’m not sure what the A-theory of time is doing so far to the right. I personally find it hard to commit either way. The internalism v externalism debate in the middle is also quite interesting- maybe it’s the latest battleground between left and right?Report