Among U.S. philosophy departments with graduate programs, those with a higher proportion of women faculty award more PhDs to women students.

That finding is the work of Eric Schwitzgebel (UC Riverside) and is reported at his blog, The Splintered Mind.

Schwitzgebel notes that a previous study by Molly Paxton, Carrie Figdor, and Valerie Tiberius showed “some evidence of a relationship between departments’ proportion of women faculty, women undergraduates, and women graduate students.” His study looked at a larger sample of philosophy departments and focuses on the number of PhDs earned, rather than on the number of students enrolled.

Here’s a chart of the correlation Schwitzgebel found: 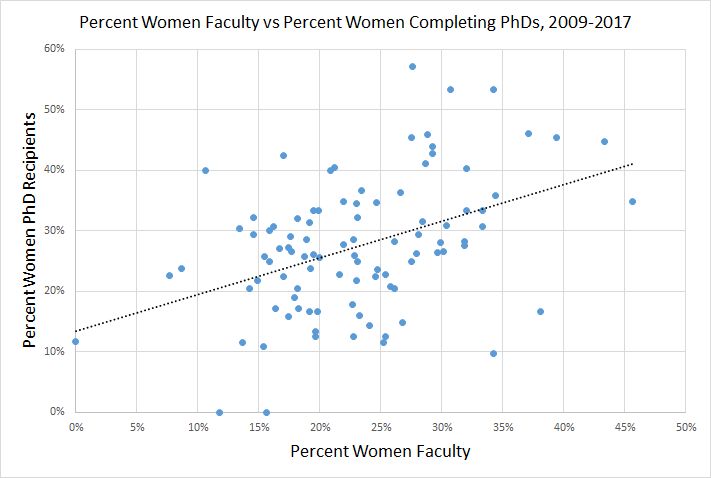 The correlation is substantial r = .42 (p < .001). For example, although only 37 of the 97 universities had over 25% women faculty, all ten of the universities that had the highest proportion of women among their Philosophy PhD recipients did.

He found no relationship of correlation between number of women among an institution’s philosophy faculty and the number of undergraduate degrees in philosophy awarded to women.

Thanks for this! I’m wondering about what seem like Schwitzgebel’s differing responses to his two results conflicting with Paxton et al.’s. For the correlation between women faculty and women undergraduates, he says “I’m not sure what to make of [the conflict].” But he doesn’t seem worried about the conflict for the correlation between women faculty and women graduate students. I’m pretty unsophisticated about this stuff. Is this difference in attitude justified solely by the difference in sample size between these two results in the Paxton et. al. study?Report

I mean, I read the section on the limitations of Paxton et al. Just felt like I didn’t fully understand these stances of his.Report

Thanks for the comment, Joseph! I wasn’t looking systematically at the undergraduate component, which would have been better to do with a more systematic representation of departments (not just PhD granting ones) and a different selection of faculty (not just tenure-track ones). That Paxton et al. didn’t find the relationship at the graduate level could easily be explained by limited power (probably even .45 wouldn’t have shown up in their sample), while the contrasting results on undergraduates seem more difficult to explain without further investigation.Report

Thanks for the reply, that makes sense!Report

I’d be interested to see some stats for MA programs: relevant data would include: percentage of women faculty, percentage of MA degrees awarded to women, percentage of women MA recipients going on to PhD programs (in philosophy and separately in other disciplines) (compared to percentage of all MA students continuing on), ultimately completion rate of those higher degrees, again for women, and for all continuing students. (More challenging data to compile, I know).Report

It may also be interesting to look at the departments’ area strengths, and whether their women faculty and graduates fall into these fields. For example, it might be found that, for whatever reason, departments with more women faculty and with a strength in social/political graduate many women with PhDs who would self-identify a strength in social/political.Report

What does “means” mean here (i.e., in the title of the post)? That makes it sound causal, whereas there’s various reasons to wonder whether there’s any indication at all in that regard (cf., “correlates with”). Could be the areas of philosophy as a common cause, without implying the faculty are driving the numbers. Could be geography–maybe men and women cluster in different places. Could be spousal hires or other forms of “noise” in the system. Could be “culture”–whatever that means. Could be lotsa stuff.

But I doubt we should print the bumper sticker quite yet: “Go hire more female faculty and you’ll get more female students.” I think this post could be mis-read by hiring committees, deans, etc. in a way that we should be careful about what the takeaway is supposed to be.Report

I think that it’s supposed to be a sense of “means” that just says “is a signal of”. For example:

– doesn’t mean that the purchases CAUSE Christmas, but only that e.g. they’re a good indicator that Christmas is coming soon.Report

This correlation is intriguing and raises a lot of really interesting research questions for those of us interested in the factors contributing to underrepresentation of women in philosophy.

I agree with Jon Light above though and caution against any particular interpretation of the causal structure of this data. Here are just a few more potential underlying causal structures:

–Maybe gender differences in AOS (e.g. Eric Schwitzgebel and Carolyn Dicey Jenning’s work that women are better represented in Ethics than other areas) translate into some programs with more focus in those AOSs having more women among faculty and graduate students.

–Some departments are better at recruiting women (both faculty and PhD level) during the application phase, which might translate to more women on the short list of positions (with or without affirmative action).

–Maybe prospective women graduate students are more likely to attend PhD programs that have more women faculty because they think of the gender proportion among faculty as an indication of the warmth of a department’s climate.

–Maybe parental leave tends to be better at programs with more women faculty members (who perhaps paved the way for paternity leave, etc) and this translates into fewer women leaving the PhD program due to childcare demands.

–and many, many more.

So we should refrain from interpreting this correlation according to any particular hypothesis about the underlying causal structure, despite how tempting some of them might be! Rather this intriguing finding should be a call for more research by philosophers (and social scientists) into why certain marginalized groups are underrepresented in philosophy.

Thanks Eric for always doing such great empirical work on the demographics of philosophy!Report

Thanks, Morgan! Yes, there are many possible explanations. Although I was inspired to examine the question by the “woman-friendliness” hypothesis, the root causes are impossible to know from such a limited analysis.Report

Kaila Draper on Logic and the Law

Fritz Warfield on Logic and the Law

My colleague Curtis Franks has just about commented his way into a guest speaker invitation to myPhilosophy of Law class this semester.