“It has been very smooth from a medical perspective, deeply moving and gratifying from an emotional perspective, a wellspring of reflection in my philosophical thinking, and a dramatic source of excitement in my teaching this semester.”

That’s Arthur Ward, teaching professor of philosophy at Lyman Briggs College at Michigan State University, describing the life-saving kidney donation he recently made. When I heard what Dr. Ward had done, I asked him to share his experiences and thoughts here at Daily Nous. The result is the following guest post.

On February 20th, just last week, I donated my left kidney to a stranger. Because of my donation, two other people agreed to donate their kidneys as well, resulting in three simultaneous life-saving transplants. More transplants may still happen in the future as part of the “kidney chain” that I initiated. As a philosopher with an academic interest in effective altruism, this was partly motivated by that worldview, though I certainly don’t want to portray myself as some philosophical Vulcan whose actions follow wherever the logic leads; it’s fair to say I had a variety of motives. In what follows, I want to share some details of what led me to donate my kidney to a stranger, and describe what the experience has been like. Donating has been moving and wonderful, and much less difficult than you might think.

I want you to understand that I don’t identify as some extreme altruist. I don’t give away 30% of my wealth each year, or volunteer weekly at a homeless shelter, though I admire those who do. But I am a philosopher who teaches bioethics on a regular basis, and one topic that I regularly cover in class is the issue of organ scarcity. For a few semesters now, I had been assigning a VOX article written by the journalist Dylan Matthews, where he details his own experience as an altruistic kidney donor. The argument he makes is informed by academic philosophy (he discusses Singer’s famous child-in-pond thought experiment, for example), and the details are powerful for students to read: There are thousands of people that die each year in the US because there aren’t enough donor kidneys, and tens of thousands more that live with difficulty on dialysis. Meanwhile, most of the rest of us don’t really need both our kidneys, and the risks of being a kidney donor are remarkably low. The surgery is easy and safe, the recovery is short, and once recovered there are no special lifestyle or dietary restrictions, other than a directive to be a healthy person.

I teach bioethics and STS at Lyman Briggs College, an interdisciplinary residential college focused on science and society within the gigantic Michigan State University. Most of my students plan to go into the health profession. Discussing the argument for altruistic donation with students in my bioethics classes, I learned to present the points in a neutral, even distant manner. Then, one day over this past summer, out of the blue, the idea popped into my head that this is something I could realistically do. Once this entered my imagination, the idea became unshakeable. Indeed, this has been one of the most certain and happiest decisions I’ve ever made.

Beyond the persuasive power of the argument for altruistic living donation (and it’s powerful), I’ll share some of my other motives. In fact, it sometimes was difficult to accurately judge which motivation was strongest. Partly, I think this was a reaction to the era of Trump: of feeling helpless in the midst of injustices like child detention, environmental poisoning, and malice directed at people of color, women, and the LGBTQ community. In the face of such powerlessness, being a kidney donor has been a ray of light for me: an act that I could be certain was doing some good. I won’t deny that it also “feels good” to go through the donation process! People are awfully nice to you when they find out. It feels so good, in fact, that as a philosopher, the paradox of altruism sometimes gnawed at me. I decided to mostly keep my donation a secret from most people until it was imminent. I sought permission and acceptance from my family first, and then told just my employer and a few close friends.

For me, the process from initial contact with the transplant center at the University of Michigan, to the transplant itself, was about four months. There are no financial costs to the donor. There are, however, many many tests. Blood tests and urine samples, a few EKG’s, a chest x-ray, CT-scan, a nuclear medicine test of kidney function, a 24-hour blood pressure cuff, and two psychological examinations. It’s rare to get such an immersive peek into high-tech medicine and not be distracted by the stress of being unwell. As a healthy bioethicist, all the testing was like a hospital safari. Having the most common blood type, O positive, I was sure to have many possible recipient matches, and so I was told I could more or less pick the time I wanted to donate. I chose late-February, shortly before my Spring break. The acute recovery time is just two weeks, and so this meant I would only miss a few classes, take the extra vacation week, and return after Spring break. Everything at work went according to plan, thanks to some helpful colleagues willing to cover my courses for a week.

My surgery took place early in the morning on a Wednesday. The procedure lasted a few hours, and then there were a few hours of post-op recovery where I drifted in and out of sleep, but by the afternoon I felt alert and in good spirits. That night I stayed in the hospital, and I was released the next day. I have pain, of course, but it feels like normal and familiar pain: like a bad abdominal strain. For the first two weeks I have to stay at home and really rest with minimal activity. After that, I have to avoid strenuous activity for another 4-6 weeks. And that’s it. After a couple of months, I can exercise, travel, drink alcohol (actually you can drink starting on day 2), and live a normal life. This stands in contrast to lifestyle changes that are required after donating part of one’s liver or lung. I might have a hard time giving up alcohol being a liver donor, but I’m not generally phobic of doctors or hospitals, so a kidney was a good option for me. Everyone has their own quirks and so doing this isn’t something I recommend for all.

Friends and family have posed many good questions and challenges regarding my decision to donate. Is the act of generosity worth the (small) risk to my own health? Shouldn’t I hold onto my kidney in case someone in my immediate family were to need one later on? Is donation less pressing these days, if we’re maybe only 15 years away from viable xenotransplantation or artificial organs? What grave act of immorality have I surely committed for which this act is meant to compensate? To do a full AMA would be too lengthy (you can check out Dylan Matthews’ reddit AMA here), and I don’t want to prescribe what considerations should weigh on others. Having gone through the experience, though, let me say that it has been very smooth from a medical perspective, deeply moving and gratifying from an emotional perspective, a wellspring of reflection in my philosophical thinking, and a dramatic source of excitement in my teaching this semester (I told my students just one week before my surgery, in the middle of our organ scarcity unit).

As I wrote in a facebook post the day after my surgery, there is some irony in the fact that one must be very privileged to donate a kidney. You must be very healthy both physically and mentally, have a job that’s willing to let you take a few weeks off of work, and have a very stable support structure at home. So, insofar as being a donor is rewarding, and it is, this is a reward not equally available to everyone. But many philosophers are in this privileged group. Furthermore, our training as philosophers prepares us better than most members of the public to be sensitive to the powerful logic of altruistic donation. I think what stopped me from jumping to donate in the past was mostly lack of imagination. It didn’t seem like real life. In that capacity, I hope my experience can make the possibility of altruistic donation salient and realistic for other academic philosophers. It was not difficult to do, it is not medically risky for most people, it has been enormously personally rewarding, and it tangibly improved or saved several lives. If you’re intrigued, let this click be your next step. 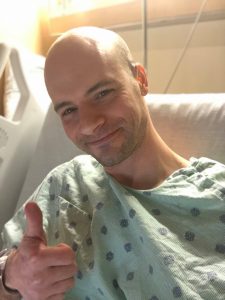 This is so awesome and inspiring. It nudges me in your direction for sure. Helps make such a thing more thinkable when someone you know does it. Thanks for doing this and letting us know what is involved.Report

That means a lot coming from you, Dave, thanks! I’m happy to field any questions, even if they come from general curiosity. One important detail I left out, is that for the chest X-ray, you get to wear these cool metal stickers on your nipples, and you don’t even have to give them backReport

This is an extraordinarily admirable action, no matter how much Dr. Ward tries to downplay it. Thank you for doing this, Dr. Ward, and for sharing your story with us Report

It seems like I am always hearing this layman’s objection to philosophy that it’s all a bunch of words with no practical significance. Well, I think purely intellectual pursuits are worthwhile. But it’s also good to have Arthur’s example to point out that sometimes philosophical thinking leads people to do things that seem dramatic. Talk about the walking the walk!Report

Arthur, Thank you for sharing your powerful story. I’ll be teaching a module on effective altruism next week, and I’m suddenly feeling a bit guilty about having two kidneys. And to echo Spencer, thanks for demonstrating how practically significant philosophical reflection can be. I always stress to my students: “Philosophy matters!” You are living proof.Report

They most definitely have de facto veto power in many cases. Many journals are perfectly honest about the fact that two glowing reports are required […]

In seriousness, I don't think I'm particularly unusual in saying things like that (and Mark van Roojen's testimony supports this). Lots of people have a

Occurs to me that this is all fodder evidence for the old debate about privileged access. It did extend my mind on this.

I think that would be good too.

Could be but I don't have a hypothesis as to why. And I do think that before anonymity fancy people had an undeserved leg up. […]

Sure, all good points, but it sounds like variations on the standard publishing model. I'd like to see new models.

That's an excellent question. Our problem is we don't know what our goals are here or how we would measure success in meeting them.

Daily Nous readers are encouraged to look at the discussion of the case on my Facebook page. (It is a public post.) Some readers have […]

What form would this hypothetical evidence take?

Other people are almost as wonderful as I am.