The administration of the University of Hull is prohibiting new students from beginning a course of study in philosophy.

The Hull Daily Mail reports that “Jeanette Strachan, registrar and secretary for the University of Hull, has confirmed that new students may not be taken onto philosophy or modern languages courses during the 2019-2020 academic year.” There are unconfirmed rumors circulating that the Department of Philosophy at the University of Hull will be closed.

Strachan is quoted as saying, “We regularly review our portfolio and will continue to do so to ensure a sustainable and high quality university that meets the needs of our students, research and business partners.”

The British Philosophical Association (BPA) has posted an open letter protesting the threat to philosophy at Hull signed by the heads of 39 philosophy departments across the United Kingdom. It reads, in part:

This is a momentous decision that deserves serious reflection; philosophy has been taught at Hull since the inception of the University in 1928, and the department continues to be a key contributor to philosophical research in the UK and internationally. We understand that no independent review of this unit has been conducted; that the University Statutes have not been respected; that the financial case for closure has not been rigorously made, and that the proposal is being made on the basis of claims about the value and potential of studying a philosophy degree that have not been fully discussed with – and are disputed by—the Philosophy department at Hull and by the BPA and other national and international bodies. We strongly urge the University to reconsider this course of action.

The undersigned heads of department and subject leaders in Philosophy support the BPA’s request that the University of Hull engage in a dialogue with us, as the national subject association, about the future of its Philosophy programmes, and that the University provides a timetable and roadmap for a full process of consultation and interdependent review.

In our view there is robust evidence of the value of Philosophy as a discipline to those who study it, to interdisciplinary research, and to public and community engagement. We would welcome an opportunity to share data about student numbers, attainment levels and career outcomes in the discipline. Instead of being a narrowly vocational qualification, philosophy degrees equip students with a wide range of highly-valued and sought-after skills, and there is compelling evidence that graduate employers have a high regard for philosophy degree-holders; the Times Graduate Destinations for 2017 leavers (based on DLHE data) reports 71.2% positive destinations for the subject. We think the future for philosophy programmes looks very good, and that it is very much in the University of Hull’s interests to keep this one open.

UPDATE: The university administration appears to have changed its mind for the time being. 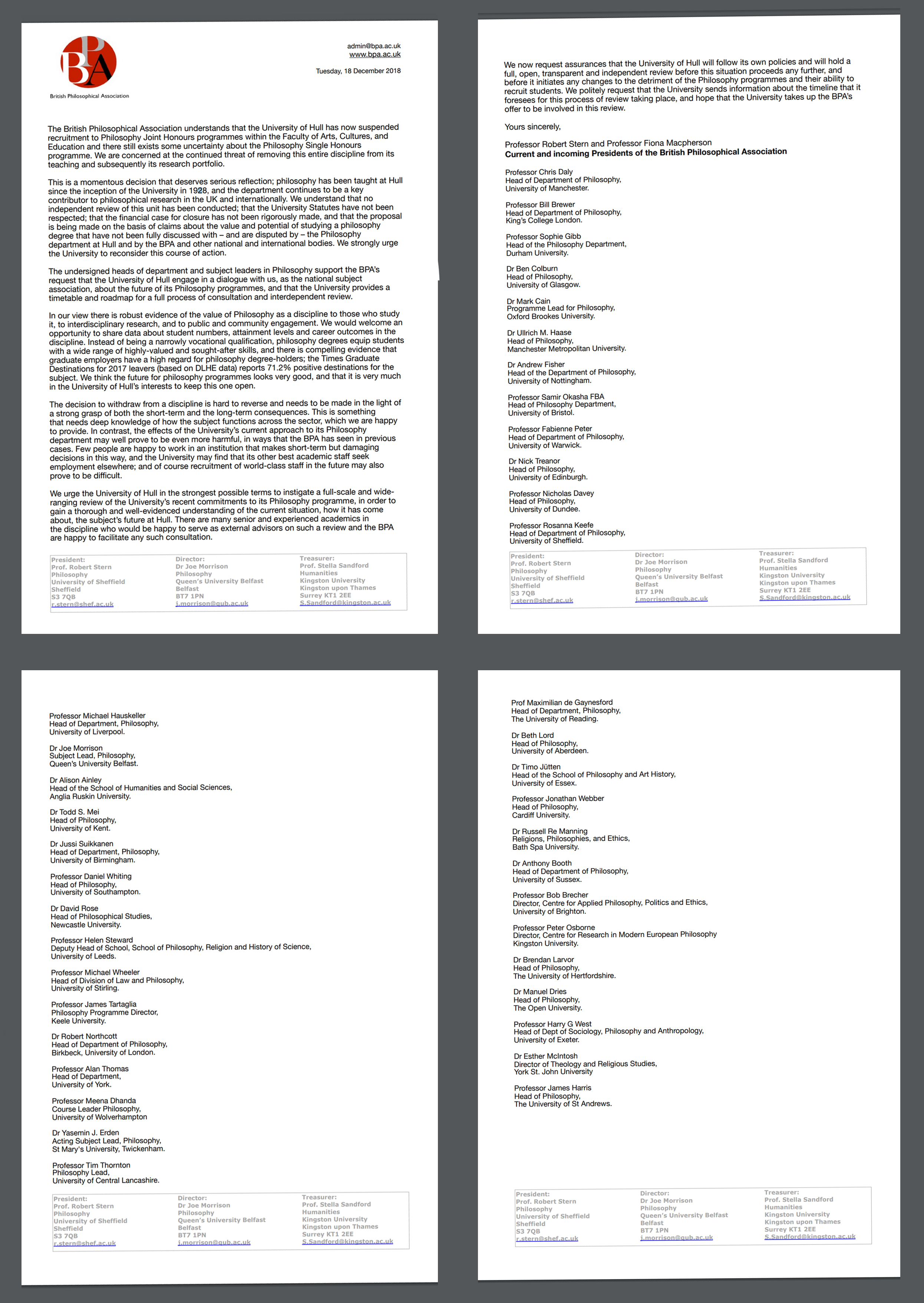