A visual communication designer has created an interactive timeline of philosophical ideas that is impressive, useful, and beautiful. 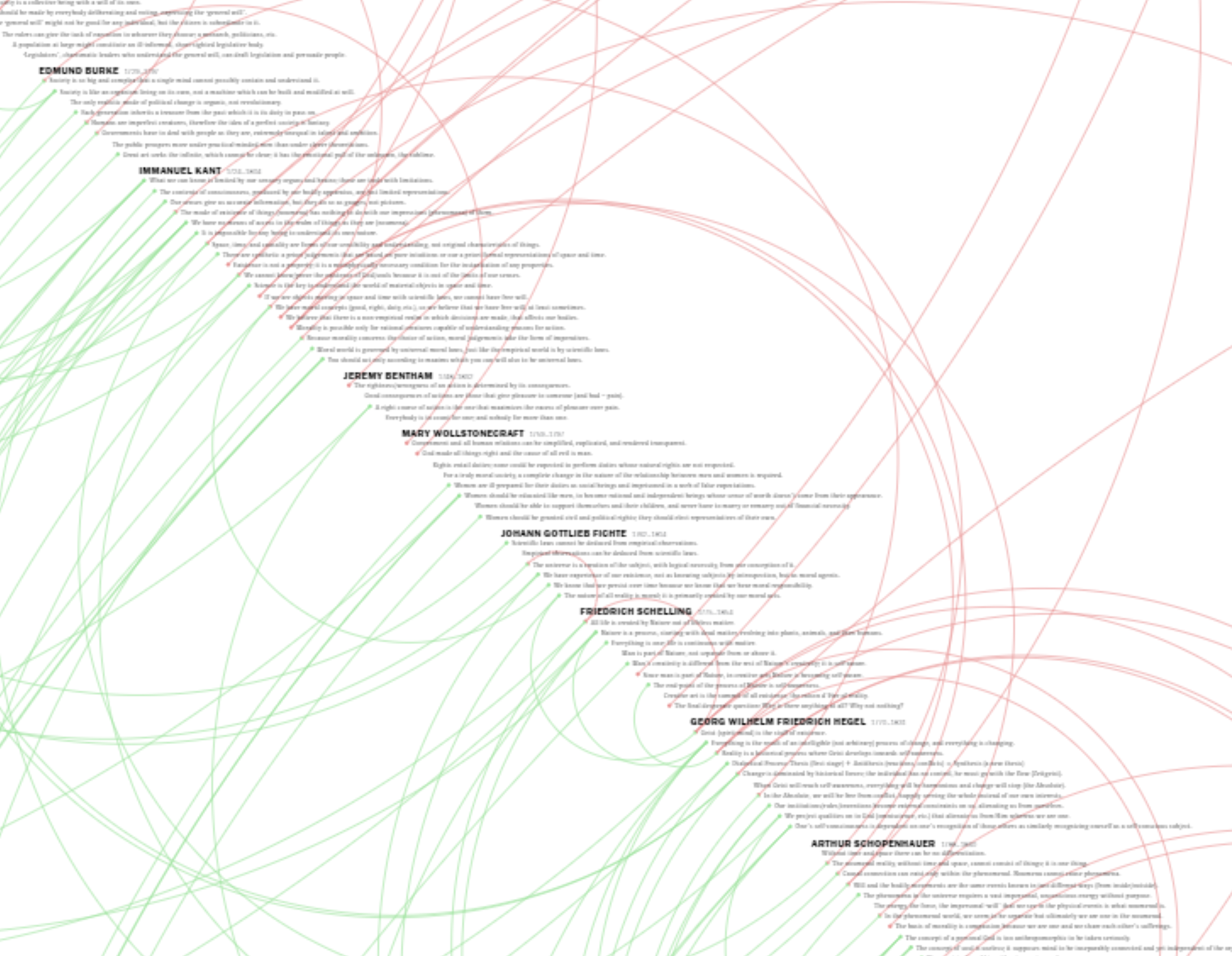 Deniz Cem Önduygu works as a designer in Istanbul. He isn’t an academic philosopher but he loves philosophy. He created this interactive timeline of the history of philosophical ideas as “a purely personal project that I’m doing in my own time, with my limited knowledge, for myself; and I’m sharing it to get feedback and to make it accessible to those who are interested.”

Viewers can zoom in and out of the timeline and see philosophers listed in chronological order, with ideas they’re associated with listed beneath them. These ideas, in turn, are connected by green lines to similar or supporting ideas elsewhere on the timeline, and connected by red lines to opposing or refuting ideas elsewhere on the timeline. If you hover your mouse cursor over a single idea, all but it and its connected ideas fade. You can then click on the idea to bring those connected ideas closer for ease of viewing.

Önduygu began working on the project in 2014. He is rather modest about the project, acknowledges its limitations, and welcomes suggestions.

In his description of the timeline, Önduygu says, “It’s a never-ending work-in-progress… As much as I find this way of looking at philosophy quite productive (and fun) for many reasons, I’m not proposing that this is the right way to look at it; it is just one version that I like to see—an organized collection of notes, reminding the key arguments and letting me see how they developed, from a distance.” His main source materials have been Bryan Magee’s The Story of Philosophy and Thomas Baldwin’s Contemporary Philosophy, along with other works for specific philosophers and ideas.

You can explore the timeline here and read about it here.

Beautiful indeed. But, is it okay for professional philosophers committed to serious scholarship to use such devices? Building on my work in diagrammatic reasoning, I published a philosophy of history piece not too long ago arguing that, because of severe limitations in what humans can fathom, diagrams like timelines should be regarded as a genuine parts of genuine inquiry (and not merely as quaint visual add-ons): https://www.degruyter.com/view/j/cogsem.2016.9.issue-1/cogsem-2016-0002/cogsem-2016-0002.xmlReport

You are making an excellent point that Timelines are a genuine part of Inquiry. Inquiry is furthered by universal access . We are too specialized in today’s world of philosophy. As a consequence philosophy has become ultimate hair-splitting and irrelevant to things that are happening in the real world. The sharing of this timeline with everyone on the net appears to be a huge assist for lay people in seeing the connections between and amongst philosophers from different cultures and Centuries. This is definitely an example of a visual that furthers inquiry and forms a part of that inquiry.Report

Fantastic -thanks! Another good one would be world religions with lines of agreement and disagreement. Sacrificing would be a good thread to follow on such a chart.Report

It’s neat, but I don’t like the flattening, putting all the philosophers’ ideas along a single line; this makes it harder to appreciate the bigger picture visually. It would be nice to see a 2-dimensional representation of the data, something like this.

[Note from JW: the link opens to a page that says “Click here to download attachment.” It sounds suspicious, but I clicked the link and it opens up a very nice map of philosophical ideas; it seems safe.]Report

I like it very much but it seems not to fit my laptop screen.Report

Where are the Eastern philosophers?Report

Thank you for this amazing work sir!
Can you please include HANS-GEROG GADAMER in your update? He is not in the timeline. ^_^Report

I came across this because I want to do a similar thing. My idea is more like a multidimensional timeline wiki that is zoomable. The timeline would be able to scroll from left to right, and one could zoom in on any date to see what took place within the selected time frame (day, month year, century, etc.). From there you will be able to click on any item form more information. For example, if you click on the release of A Treatise of Human Nature, you will be taken to a page giving a summary of the work, with other clickable links related to the work. You could then zoom back out from the path you took. It would be like travelling through a wiki.

Another idea for this would be to have guided paths through various works on the timeline. For example, say you knew all the works read by Kant; you could click on a guided tour for those works and it would take you through the philosophical reading path taken by Kant, or one that anyone recommends.

I would also like to see something made that changes the structure of the information, so instead of just a timeline it could be a type of flow chart for movements. This way, you could zoom in on categories of thought and follow the paths of different works through subsequent responses. For example, from Anselm’s Ontological Argument to Guanilo’s Perfect Island response.

I’ve seen interactive concepts like this before. One very interesting example is for the connections between music genres on https://musicmap.info/.Report

Jen, you said that you will think nothing of a response that rejects one of your assumptions, which you have numbered 1-4. But that's a very […]