On the occasion of the 25th anniversary of the European Journal of Philosophy (EJP), editor Joseph K. Schear (Oxford) reflects on the journal’s history and announces some changes to it.

Twenty-five years ago, EJP’s founding editor, Mark Sacks (Essex), noted the “insularity and intellectual fragmentation that had marred European philosophy for much of its recent 20th century past,” and saw the founding of the journal as a way to help philosophy in Europe overcome these problems. In a current editorial, Professor Schear states that in some ways the project has been a success, but that there is more work needed. He says:

The great majority of our authors consistently come from the United Kingdom and the United States. Though the study of German philosophy and its history has a strong presence in the journal, fewer than 10% of our authors per year, and indeed fewer than 10% of those who submit, originate from Germany. Likewise for France. The numbers are even smaller for Italy, Spain, and the rest of Europe, much less South America and East Asia, where there are strong and growing centres of interest in European philosophy. Some of the reasons for this are of course beyond our control. For example, the monograph, not the essay, is crucial for academic promotion in a number of these locales; what’s more, the anonymous peer‐review journal is not a staple of academic culture or indeed prestige across all of Europe. Even so, it is clear that we need to do better to make EJP a more attractive destination for philosophers living and working beyond the English‐speaking world. We need to do more than simply remind possible contributors that, though papers are published in English, submissions are also welcome in French, German, Italian, and Spanish.

You can read the full editorial here. 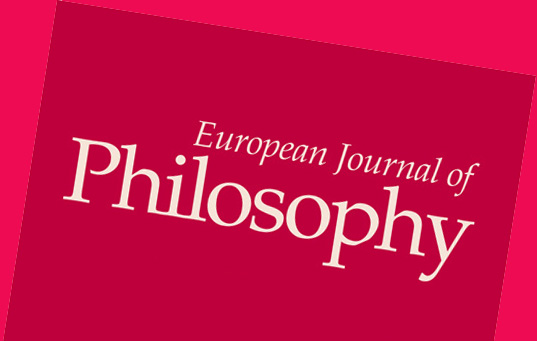 Have not heard anything about Central and Eastern Europe in this editorial. Do you really call yourself “European”?Report

Well, I read ‘rest of Europe’, ‘all of Europe’, ‘beyond the English-speaking world’, all of which include Central and Eastern Europe.Report

To me, “rest of Europe” sounds like “rest of people” in “white males and the rest of people”. The fact that CEE is included in the phrase does not mean that it is not neglected.Report

Well, I personally like and study Portoguese, but it’s definitely not one of the most spoken languages *in Europe*. It makes sense that it is not included. A more surprising absence are slavic languages.Report

The following sentence is very striking: ‘Over the course of its relatively short life, the journal has migrated from Essex to Sheffield to Oxford, where it has been based since I took over in 2014.’

I can’t help wondering whether the EJP might seem more hospitable to work from outside the English-speaking world if it was based somewhere outside of England. Perhaps someone at Cardiff or Edinburgh – or even Queens University Belfast – might be willing to take on the task.Report

Harman's full view of moral status of fetuses isn't presented in the Daily News piece - indeed, her view is IMHO one of the most […]