Professor McDermott was known for his work on American Philosophy. Prior to coming to Texas A&M, he taught at Queens College (CUNY). He earned his Ph.D. in philosophy at Fordham University.

In 2016, Professor McDermott was awarded the inaugural Lifetime Achievement Award from the William James Society. We was a past president of that group, as well as of the Society for the Advancement of American Philosophy.

He believed in the centrality of the humanities as a means to a great education because it defines what it means to be human. John McDermott never lost sight of our core mission of teaching what it means to live a good life and how to live it… Dr. McDermott’s writings and teaching not only influenced people, but also literally saved lives. I know of stories of people in great despair who read his work and it brought them back from the brink. What more could we do on this earth than to help each other?

Professor McDermott did not shy away from the big yet personal questions of philosophy. In a 1991 paper, “Why Bother: Is Life Worth Living?“, he writes:

I try as hard as I can to believe that the nectar is in the journey and not in its final destination. I stand with T.S. Eliot, who warns that “For us, there is only the trying. The rest is not our business.” Perhaps I can describe my philosophical position as a Stoicism without foundation. Walt Whitman says it for me better than I can say it for myself. “The press of my foot to the earth springs a hundred affections, they scorn the best I do to relate them.” 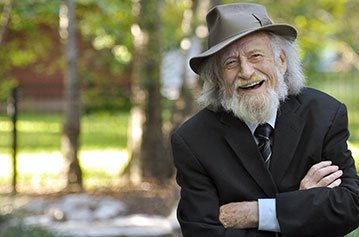 In addition to his accomplishments in teaching and scholarship, John was an extraordinary colleague and friend. As Dan Conway commented in a previous interview about John, he was the soul and conscience of the university. We will miss him here— a hole that will not be filled.Report

He used to be known as “the Godfather.” Iconic figure of Americanist philosophy, with a personality to match the size of his philosophical contribution. Pretty much the last of the SAAP founding generation, alas. If he had not existed, Deus sive Natura would have had to invent him. Which it evidently did. Rest in peace, Godfather.Report

so sad to hear of his passing…I took a number of his courses at Queens college Graduate and Undergraduate.I have always called him the most brilliant man I had ever met.His encyclopedic mind dazzled.I always remember his Dialogue with Eric Fromm at the college.Fromm’s simplicity and the broad strokes of knowledge that McDermott demonstrated were a startling difference.
His daily humor about his trips on the LIE to class were hysterical.His Jesuit like thought process and humility brought life to each day.I had written a paper on a book “A dialogue between Unamuno and William James” which he referred to in his “the Writings of William James”.I felt quite honored when he signed his book for me as a friend.He was a mentor of great wisdom who walked with me intellectually throughout my life….thank you John….

I owed John more than I could ever repay. He was a main reason why I, and so many others, remained in philosophy, reminding us of its heart and soul when the grind of life in the academy was causing us to forget. He, along with Camus, had the courage to face squarely, both in his writings and in his life, the deepest of all philosophical questions: Why bother? There will never be another one like him.Report

Jeff on Obstacles To Curiosity

Following Jonathan Lear, I'd nominate knowingness. This is a problem that crosses political and ideological lines. As a faculty member at a liberal arts college, […]

I would think (and I suspect you'd agree, David) that the relevant kind of curiosity isn't just "curiosity about currently controversial and highly politicized topics," […]

Where is the issue of ensoulment mentioned in the draft decision? (A word search for "soul" turns up nothing for me.)

It doesn't have to. But if they do indeed think that there is some particular thing that is the central concern of a university, then […]

That's probably right if their curiosity happens to organically turn to the subject matter of the class. But curiosity has a way of sending you […]

Tom Hurka on Obstacles To Curiosity

Why does the Heterodox Academy have to address all possible obstacles to curiosity, rather than focusing on just some? Did the Academy under Haidt concern