“To change the perception of philosophy forever.”

Moran is quoted in an article about the Congress that emphasizes its size and diversity. Held this past August, it had by some estimates 6,000 – 8,000 attendees and lasted five days.

Many of its hundreds of sessions were dedicated to Asian, African, and Latin American philosophy and among the aims of the Congress were “to globalize philosophical investigations to encompass the diverse forms of philosophizing by past and present thinkers across cultures, with special attention to critical reflections on philosophy itself and the tasks and functions of philosophy in the contemporary world.”

Moran says, “We have much to learn from each other, if we open our ears and hearts, and come prepared to have our presuppositions challenged in a friendly atmosphere.”

In other coverage of the Congress, Luca Maria Scarantino (IULM, Milan), secretary-general of FISP, is quoted as saying, “Because of its inclusiveness and scholarly influence, this Congress may therefore represent a historical opportunity for reassessing the sense of philosophy, for enhancing the theoretical diversity of philosophical concepts, and for rethinking in widely comprehensive ways the notion of ‘being’ – or ‘becoming’ – human.”

In a tweet about the Congress, John Symons (University of Kansas) noted the lack of coverage of it here, and hoped for conversation about it, given that it was “historically significant and problematic on a range of levels.”  He didn’t further elaborate, but discussion of any aspect of the Congress is welcome in the comments. 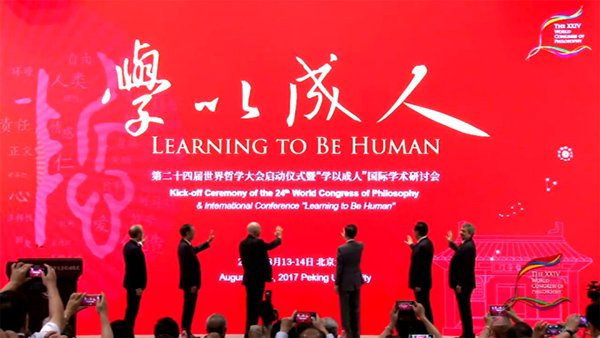 I found the conference very worthwhile but also quite overwhelming as there were literally ~100 concurrent sessions in every slot, offering papers on everything from pre-Qin philosophy to transhumanism. I probably should have done more advance strategic planning with the program. A significant portion of titles and abstracts were listed in Chinese characters, which for an English-speaking philosopher was confronting but salutory. About another 10% were in Russian.

Preparations are beginning already here in Australia for the 2023 Melbourne Congress. Put it in your diaries!Report

I thought it was great, and I’m struggling to think of ways in which it might have been problematic. Here are some guesses. The program was so long that I didn’t try to read it, just searched for certain key words. I might have missed some papers I would have liked to hear as a result. And one session I went to turned out to be in Mandarin, so I left. But I wouldn’t call having an extensive program problematic. Nor would I complain about Chinese philosophers in China discussing Chinese philosophy in their own language. Since I didn’t attend all day every day, though, there may well have been problems that I didn’t see.Report

Thanks for raising this Justin. I have great respect and affection for colleagues in China and am very happy that they had this venue that showcased their strengths. It was a privilege for me to be able to attend the WCP and I learned quite a bit from the talks I attended. It was genuinely intercultural and more diverse in all senses than any conference that I have ever attended. Chinese media gave it extensive coverage and it was inspirational to see so much energy among the philosophers in China. Dermot Moran and the local organizers did a magnificent job with logistics on the ground given the incredible scale of the event.

It was remarkable to me to find no discussion of the WCP on Daily Nous or over at Leiter when I got home. It struck me as evidence of the parochialism of American philosophy.

As far as problems go. Given the severity of human rights abuses in China at present, I was concerned that FISP (and I suppose that I) was getting a bit cozier with the Chinese Communist Party than we should. I realize that there are trade offs and that the benefits of having the WCP in China are significant, but still symbolism is important in politics. For example, the opening ceremony was in the Great Hall of the People and I think that Xi was originally scheduled to attend. The Great Hall of the People flanks Tienanmen Square.

The book display was censored. There were (the albeit unthreatening) riot police at the entrance. We were subject to intrusive document checks and verification, along with an RFID lanyard that displayed our image on a screen upon entering the building. There was restricted access to the internet, etc. Those things are certainly tolerable but they are unpleasant.

More important was the lack of critical commentary on the government. Sharp contrast with the WCP in Greece five years ago. Perhaps there were people who spoke out about the broader human rights situation in China during the conference, but I am unaware of them. From conversation, many of us, including some of the organizers, had mixed feelings about what it means to hold an event like this in China at this time. I was hoping that when I got back to the States that there would be some discussion. There was none.

China is a great country and I love being there. I hope they will give me a visa to go back after writing this! Happily I’m not important enough to have my personal presence matter much either way.

Others have given much more thought to these questions and I look forward to hearing what people with deeper ties to China have to say.Report