Jeremy Bentham is weirder than you thought.

The philosopher who thought we should be doing all we can to bring about the greatest amount of pleasure has succeeded in contributing to the total even after his death in 1832, at least for those who take pleasure in the peculiar.

You probably already know that he arranged to have his body preserved as an “auto-icon” after his death so he could be wheeled out for events and celebrations (and that he recently went on tour).

You may recall that his notes were the basis of a cookbook: Jeremy Bentham’s Prison Cooking.

But did you know that he commissioned 26 custom rings decorated with his profile and had them distributed upon his death to 26 different people?

And did you know that a team of researchers at University College London (UCL) are currently trying to find these rings? Six of them have been tracked down, according to The Telegraph.

Tim Causer, a law professor at UCL and a senior research associate at the university’s Bentham Project, says the rings were probably created in 1822, and the profile was painted by artist John Field. He adds, mysteriously, that in November of that year, Bentham had his secretary bring the artist “some of his hair.” Of course.

A few of the rings held by UCL are engraved with the names of their owners, including one that belonged to John Stuart Mill.

According to The Telegraph, “the whereabouts of the remaining twenty rings remain unknown.”

Also unknown: what happens when all 26 rings are brought together in a secret chamber at University College London at midnight on the anniversary of Bentham’s death, worn by the descendants of the original owners, as they join hands, form a circle around the auto-icon, and chant, “utility, utility, utility…” 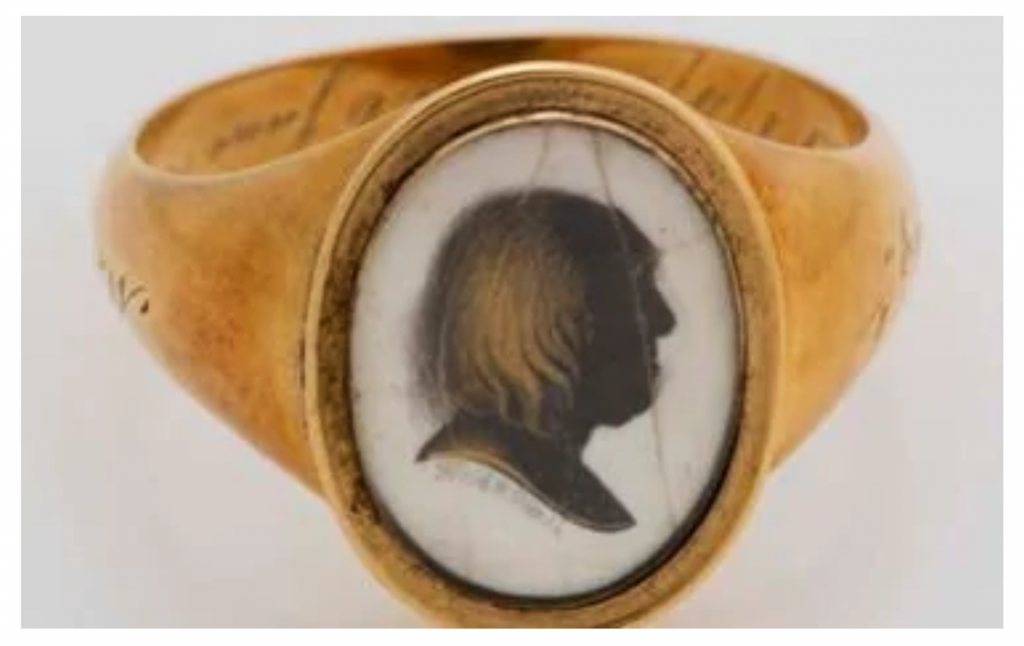 If Bentham had said nothing more than his famous standard on human beings’ treatment of animals, namely: “The question is not whether they can reason, but can they suffer,” which is the basis of Peter Singer’s speciesism, he still would have been ( at least to my lights) a great thinker. Did he have at least a somewhat inflated view of himself? Probably . . . but so what, don’t most of the today’s philosophy writers who have no more than two books under their collective belt “suffer” from the same self-perception?Report

Good, actually, I’m glad you said that. I don’t mind saying that I’ve always had a rather “soft spot” in my heart for people who are not only proud — which according to Aristotle would be a virtue — but even for those who are arrogant, as there is never a dull moment in their presence. I love the trenchant language they tend to use.Report

By the way, as those of us who attended the recent International Society for Utilitarian Studies Conference in Karlsruhe can attest, one can make a superb vegan meal from the recipes in Bentham’s prison cookbook.Report

Finally a true Lord of the Rings.Report

Yes… although 26 rings is too large a number for true mythic grandeur.

Freud scores more Sauron points; he also have rings to his followers, I think 6 or 7.Report

Interesting piece. And yes, Dale is right. The vegan meal at the Utilitarian Studies Karlesruhe conference was impressive. One small point. The Director and General Editor of the Bentham Project (from their website) is Professor Philip Schofield. Tim Causer is a Senior Research Associate. Perhaps this post will encourage people to help with the Transcribe Bentham project.
https://www.ucl.ac.uk/laws/people/prof-philip-schofieldReport

Thanks, Wendy. I’ve made the correction. I think I was so taken with how the name “Causer” matched up with Bentham’s causal definition of “utility”—certainly no coincidence!—that I must have unwittingly assumed that he was heading up the Bentham Project.Report