J. Angelo Corlett, professor of philosophy at San Diego State University, founded the Journal of Ethics in 1995 and has served as its editor-in-chief since then. In an editorial in the journal last month, he announced he was stepping down as editor-in-chief and made some remarks that readers might find of interest.

I also hope that the new editor will continue my tradition of not placing any page limitations on what is published in its pages as most of us have important articles which deserve to be published but cannot easily find a home for them because of the obsession among most publishers and their academic journals to publish rather brief pieces due to the fact that, as far as has been explained to me by some academic publishing editors, publishers are paid among other factors by the number of articles per journal volume sold. Given this fact, it behooves publishers to have published in their journals a greater number of brief articles than lengthy ones, no matter how much this adversely effects the publication of excellent lengthy articles or the quality of published research generally. The Journal of Ethics should continue to serve the philosophy community of ethicists by remaining open to publishing high quality work no matter what its length as this is yet one more distinctive feature of the journal. And it should not hesitate to publish high quality philosophical papers which go against the grain of mainstream ethics, though it is increasingly difficult to procure suitable referees in various areas of ethics due to entrenched biases among ethicists. This journal must continue to stand with Plato’s Socrates who urges us to follow the arguments wherever they lead us. I am confident that Socrates means for this injunction to be construed in a non-partisan manner.

The second concerns the general approach that Professor Corlett thinks editors should take towards authors. I don’t think his ideas here are controversial, but some may think that in academic philosophy generally they are not always lived up to:

Equally as important is that I wish the new editor the best of skill, dedication and luck and encourage him or her to edit with moral integrity and to attempt as I did to treat authors as s/he would like to be treated. Authors ought to be treated with dignity, respect, justly and fairly. And when errors are made, it is the duty of the Editor-in-Chief to take ultimate responsibility (with an attitude of taking strict liability) for the errors and to do all s/he can to correct them as quickly and as well as possible, providing authors with as much autonomy and authority in the process and as is possible under the circumstances. I have attempted to do this since 1995. It is the very least that an academic editor can do out of respect to authors, the journal s/he edits, and to the academic profession as a whole.

The whole editorial is here. Professor Corlett will continue to be listed as the journal’s Founding Editor. To my knowledge, a new editor-in-chief has not yet been named. 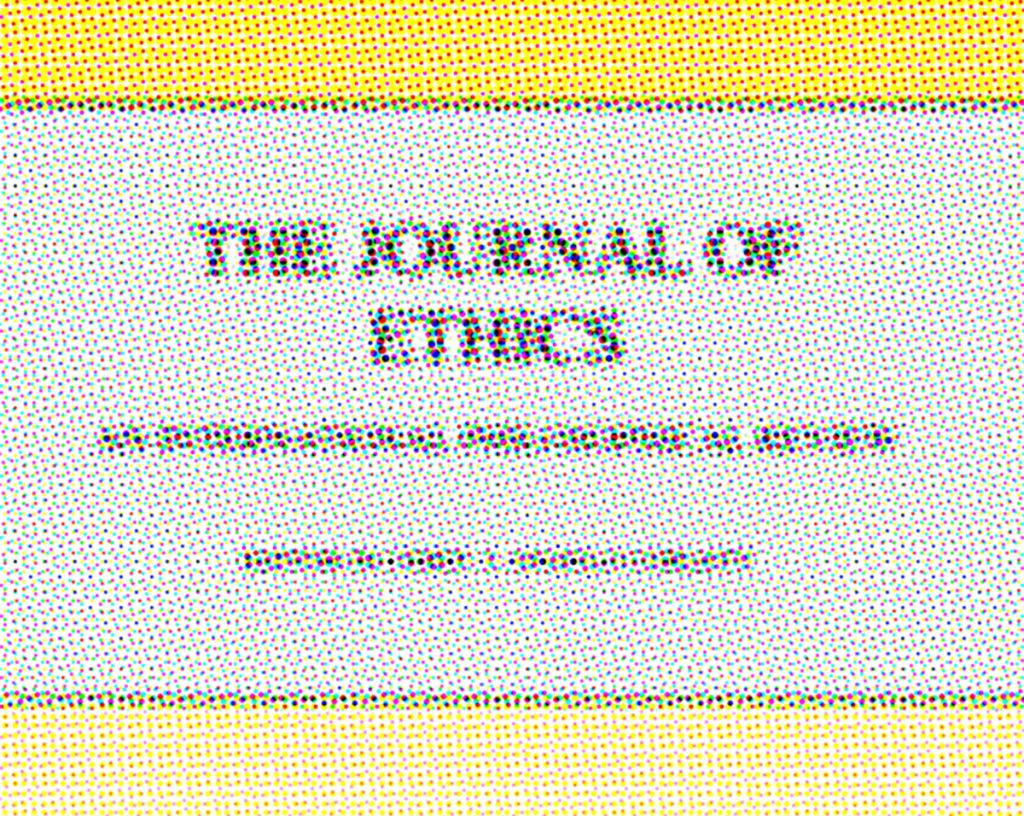 Kudos to Professor Corlett for these remarks. I don’t know if I’ve ever submitted anything to the Journal of Ethics. But I will now. And I sincerely hope the incoming EIC will continue with the editorial philosophy described.Report

Well, congratulations to him both for retiring (yay!) and a relatively good editorial tenure. However, I have never forgotten my one submission to his journal: it took 2 months for he/them to reply that “the Editor is not currently interested in this topic.”

I think we all know that there are many problems in philo journals. That an editor can just say, “I’m not interested in this at this time” with no peer review or other oversight is a huge problem. (And, yes, the article was published in another excellent journal – after I had wasted 2 months.)Report

I have no recollection at all of using such language. Please provide the communication to substantiate that claim as it is a serious one which I myself would condemn. You might well be confusing comments provided by another editor/journal. Without the substantiation, we will never know. My comments would never contain that language because it is not the editor (me, in this case) whose interest in the submission is at stake. Rather, it is what the journal wants or what is best for the journal that is the issue. Now it might have been the case that I stated quite differently and after substantial deliberation that “The JOURNAL is currently not interested in this topic,” and there might be a number of reasons for that claim. One is that the journal is attempting to reach a certain balance among the several other topics in ethics and so it wishes to not consider submissions in this or that particular area of ethics at that time. I certainly recall making such comments to some authors. Many journals do this, and it is not a bad thing to seek balance among topics, though achieving it is quite another thing indeed. That the review process took a couple of months is not that bad since several journals take far longer than that to review submissions. Since I no longer have access to the journal’s records I cannot speak to the specifics of your submission, except that the language you quote with respect to the use of “editor” is certainly NOT mine.

Thank you for your thought.

I’m sorry, but this happened before the Internet/email. I certainly no longer have the letter – or, if I do, goddess knows where it is.Report

Oh, dear. I should point out that my ‘YAY!’ for retiring was a happy expression for all who retire.Report

Hmm. I don’t think it is worth getting into this too much, but “it happened before the internet/email”?? My recollection is that email/the internet came into existence prior to the founding of the journal. Perhaps Professor Sisitare means, “before the use of these means in journal correspondence”, or something like that? Even so my guess is that memory might not be accurate about something that happened so long ago! And I might add that two months is not that long, in any case, no matter what was written. We need to be fair here.

I could tell you stories about other journals. MIND come to mind (sorry)…Report