A vast array of websites appear in most internet search results, and often those who are searching don’t know how to determine which sites experts consider reliable.

Gloria Origgi, a philosopher at the French National Centre for Scientific Research, puts the point this way (in an essay here and in this book): we are moving beyond “the information age” into what she calls “the reputation age” in which “information will have value only if it is already filtered, evaluated and commented upon by others.”

Whenever we are at the point of accepting or rejecting new information, we should ask ourselves: Where does it come from? Does the source have a good reputation? Who are the authorities who believe it? What are my reasons for deferring to these authorities? Such questions will help us to get a better grip on reality than trying to check directly the reliability of the information at issue. In a hyper-specialised system of the production of knowledge, it makes no sense to try to investigate on our own, for example, the possible correlation between vaccines and autism. It would be a waste of time, and probably our conclusions would not be accurate. In the reputation age, our critical appraisals should be directed not at the content of information but rather at the social network of relations that has shaped that content and given it a certain deserved or undeserved ‘rank’ in our system of knowledge. These new competences constitute a sort of second-order epistemology. They prepare us to question and assess the reputation of an information source, something that philosophers and teachers should be crafting for future generations.

One firm that appears to be in the business of this “second-order epistemology,” at least when it comes to information online, is Agilience. As they put it on their “about” page:

There are billions of web pages, hundreds of millions of blogs or social media sources on the internet. If you are interested in a specific topic such as a sport, a hobby, a city, a cause to stand for, a business of any kind, etc., what are the most relevant sources you should read to have a trustworthy and up-to-date account of what’s going on?

Agilience ranks online sources in various categories, including philosophy. And according to it, Daily Nous is ranked #1 in philosophy on its “authority index.” 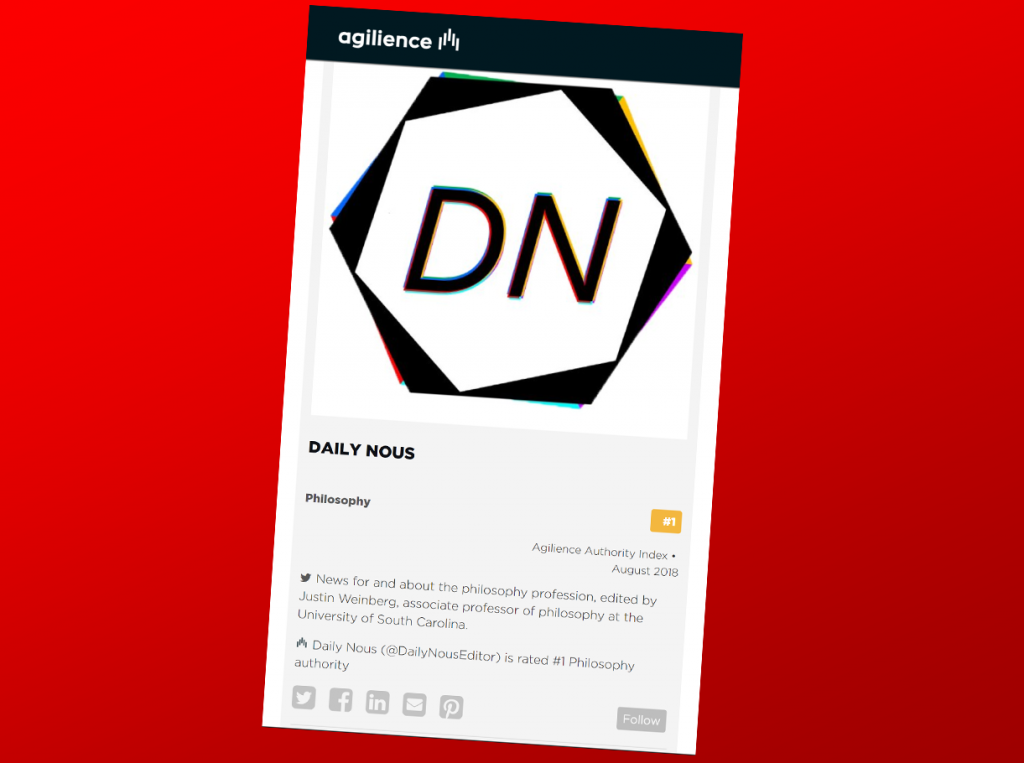 I don’t know much about Agilience’s methodology. “Philosophy” as a category is rather broad. DN fits well in a category of “philosophy news,” but doesn’t quite fit into “philosophy reference material” (in which, presumably, the Stanford Encyclopedia of Philosophy would rank highly). It also seems heavily influenced by social media presence.

Unfortunately, I was unable to find a reliable ranking of reliability rankings. So, while it was a nice surprise to hear about how well Daily Nous is doing according to Agilience, I don’t know much about how well Agilience is doing. If you know more about it, or similar services, feel free to let us know in the comments.

(Thanks to Françoise Morvan for letting me know about this.)

Certainly not an authority

From looking around a bit, it seems that it’s a ranking of twitter accounts based on the contents of their posts (which explains why the twitterless SEP isn’t ranked at all). It has some weird categories (such as a “celebrity” category, on which Kim Kardashian is the #1 authority), probably a result of blind data mining, and it doesn’t seem too reliable. Other questionable results include: LeBron James is a top 100 authority on Kia (the car company), The Beatles only make it to the top 750 on rock music, and JK Rowling is, apparently, only the #10 authority on Harry Potter.Report

Our authority index is scientifically calculated on two transparent and objective criteria:
– are you contributing/publishing/sharing content on the topic of a community ? (full open data: blogs, social media…)
– are you recognized by your peers amongst the same community ? (social graph)
Your ranking depends on the above.

Hope it helps.
Have a good day
The Agilience teamReport