Yitzhak Melamed, professor of philosophy at Johns Hopkins University, was the victim of an anti-Semitic attack on the streets of Bonn, and then was beaten by German police who mistook him for the assailant. To add insult to injury, the German police are now apparently lying about what happened.

Professor Melamed was in Bonn to give a keynote address at Bonn University’s summer school in classical German philosophy. He was being walked around the town by Lina Steiner, a professor at Bonn, when the incident began. He writes:

A stocky man about 1.60 meters tall approached us and asked me “Bist Du Jude?” and then, added that he is Palestinian. I started saying that I have sympathy for the plight of the Palestinians and deeply regret the current depressing state of Islamic-Jewish relations, when the person (realizing that I am a foreigner) started shouting in English: “I fuck Jews. I fuck Jews.” Realizing where this conversation is going Dr. Steiner and I passed to the other side and moved away from the person who then followed us with his persistent curses. Then, he tried to throw away my yarlmulka (Kippa) shouting in German that in Germany I am not allowed to wear a yarmulka. I took my yalmulka from the ground and put it back on my head. The guy got angrier: “No. You are not allowed to have the yarmulka here” (that’s my recollection of his shouts in German). He then shouted several times: “Kein Juden in Deutschland”, and threw my yalmulka for the second time. I picked it up and put it on my head. “You don’t listen to me” he shouted, and threw my yarmulka for the third time. I picked it up and put it on my head. He pushed me, and then we moved aside.

As this was happening, Lina asked bypassers to call the police, and a few of them made the phone call (there were quite a few people around). The attacker, at that point, went to the nearby lawn and started walking in circles. After about five minutes he came back to us. He pushed me and then I tried to kick him in the groin so that he would leave us. I didn’t hit, but he was deterred and went again to the green, walking in circles. I asked Lina where the police is. Then the attacker came for the third time. He pushed again, cursed, and I tried (and failed) to kick his groin. Then, we heard the siren of the police. It was at least 20 minutes after we asked to call the police (there were many passers-by around who could attest). The attacker moved slowly, then once the police car was about to park he started running away.

Professor Melamed, concerned that the attacker would get away, ran after him so he could point him out to the police. The police were running from the opposite direction towards the attacker and Melamed, but ran past the attacker.

I didn’t have much time to wonder, as almost immediately four or five policemen with heavy guard jumped over me (two from the front, and two or three from the back). They pushed my head into the ground, and then while I was totally incapacitated and barely able to breath (not to mention move a finger), they started punching my face. After a few dozen punches, I started shouting in English that I was the wrong person. They put handcuffs on my hands, behind my back, and after a few dozen additional punches to my face while I am shouting that I’m the wrong person, they finally moved from my back. I was now able to breath. I asked them to open my bag and reach for my identifying documents. My glasses were broken. My watch torn, and then after another 5 or 10 minutes they realized they made an error. One of the policemen came, took off my handcuffs, and told me that they captured person who attacked us. Then the same policemen shouted at me in a didactic tone (in English): “Don’t get in trouble with the German Police!.” This was more than enough. I told the policeman sardonically, “I am no longer afraid of the German police. The German police murdered my grandfather. They murdered my grandmother. They murdered my uncle, and they murdered my aunt. All in one day in September 1942. So, alas, I am not afraid of them anymore.” The policeman was baffled. I asked him for his name, and he refused to answer. I asked again, and again got no answer.

Professor Melamed recounts his difficulty filing a complaint about the incident, hearing police officers lie, deny, and threaten to fabricate charges of resisting arrest, his face “bleeding throughout the conversation.”

You can read the rest of his account here. 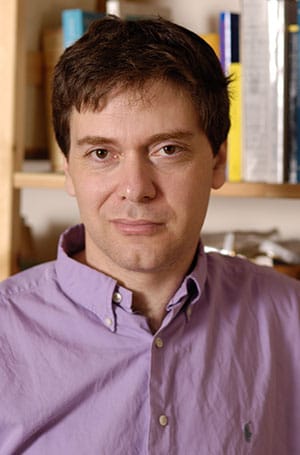