There is no law requiring family separation at the border. And even if there was, that still would not be enough to justify the administration’s cruel policy.

That’s Ilya Somin, professor of law at George Mason University, writing at Reason. He notes that in April and May of this year, nearly 2000 children were forcibly taken away from their parents, “often under cruel conditions likely to cause trauma and inflict longterm developmental damage.” 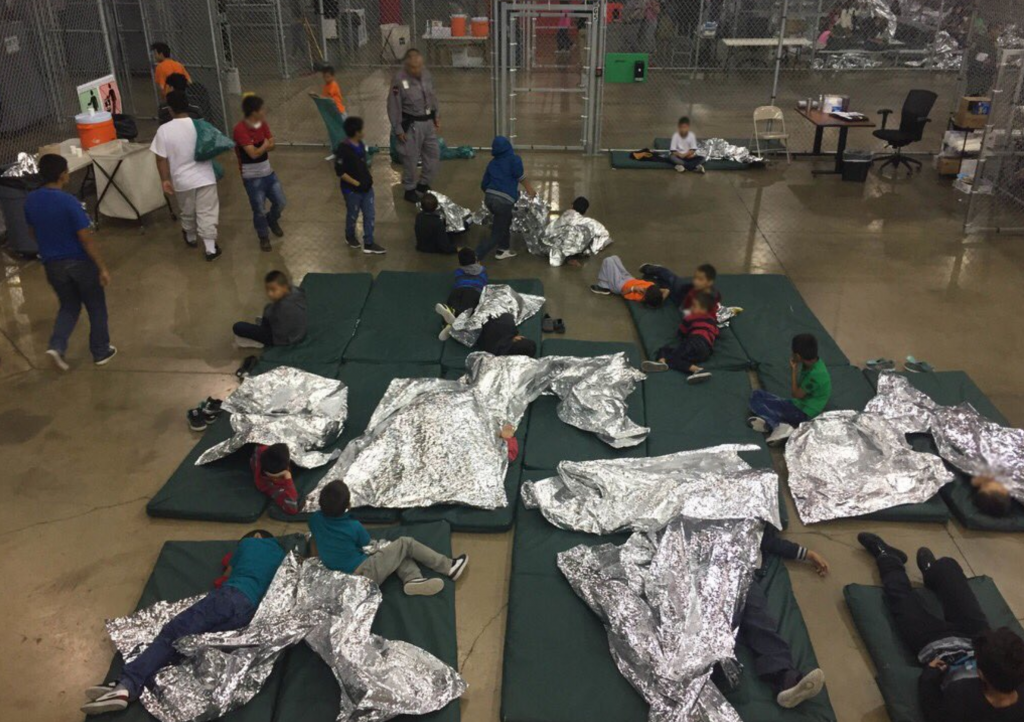 McAllen, Texas facility where agents of the U.S. government lock up children they’ve forcibly and/or deceptively taken from their parents and guardians as they arrive at the U.S. border as prospective immigrants.

The federal law criminalizing “improper entry” by aliens does not require family separation. The law also provides for the use of civil penalties, as well as criminal ones. While it states that the application of civil penalties does not preclude application of criminal ones, it also does not compel federal prosecutors to pursue both. Until the administration’s recent policy change, civil proceedings were in fact the usual approach in case of families with minor children, under both Democratic and Republican administrations. The use of civil proceedings generally does not require pretrial detention, and therefore obviates the need to detain either parents or children; some civil defendants were detained, nonetheless, but in facilities where families can stay together. The Trump administration, by contrast, has sometimes even forcibly separated children from migrants who have not violated any law, but instead have legally crossed the border to petition for asylum in the United States.

The Trump administration claims that their policy is required by the 1997 Flores court settlement. But that settlement in no way mandates family separation and detention of children away from their parents. To the contrary, it instructs federal officials to “place each detained minor in the least restrictive setting appropriate” and to release them to the custody of family or guardians “without unnecessary delay.” The settlement also mandates that federal immigration officials must “treat all minors in its custody with dignity, respect and special concern for their particular vulnerability as minors.” Detaining children under harsh conditions, separated from their parents, is pretty obviously not “the least restrictive setting” possible, and it most definitely doesn’t qualify as treating children with “dignity, respect and special concern for their particular vulnerability.”

Even if the law did clearly direct criminal prosecution combined with automatic family separation in pretrial detention, it does not follow that the administration had a legal duty to adopt a “zero tolerance” policy that prioritizes prosecution of this particular type of offense. In a world where the vast majority of adult Americans have violated federal criminal law at some point in their lives, and there are so many laws and offenders that prosecutors can only target a small fraction of them, federal officials inevitably have vast discretion in determining which offenses to pursue and to what degree. First-time illegal entry into the United States is a mere misdemeanor carrying a penalty (up to 6 months imprisonment or a small fine) lower than the penalty for possession of small amounts of marijuana (1 year). The relative penalties suggest that federal law considers the latter a more serious offense than the former. Yet not even hard-core drug warriors like Sessions urge the federal government to adopt a “zero tolerance” policy under which we routinely prosecute all small-time marijuana users. In practice, the feds only target a tiny fraction of them. And when they do, they don’t separate their children from them, and detain the children under harsh conditions.

But even if the law required the government to take migrants’ children from them, Somin argues that that is no justification, for the law is unjust:

Not every law is just. Some, at least, are so unjust that there is no moral obligation to obey them. For example, there is widespread agreement that civil rights activists were justified in violating segregation laws, and abolitionists in violating the Fugitive Slave Acts. Violation of these laws was just because they inflicted grave harm on innocent people based on morally irrelevant characteristics: race and ancestry. Much the same is true of many of our immigration laws. Most of the undocumented migrants entering the United States with their minor children are fleeing violence, abuse, oppression, dire poverty, or other terrible conditions. The laws that bar their entry are largely based on immutable conditions similar to race: who their parents were, or where they were born. The US may not be responsible for the awful conditions these people are fleeing. But if we forcibly deport them back to places where they are likely to face oppression, privation, and often even death, we become complicit in the wrongs they suffer. As philosopher Michael Huemer explains, the situation the situation is akin to one where we use force to prevent starving people from buying food they need to survive.

But even if it were just, we have choices about how to enforce the law:

Even in the case of otherwise just laws, there must be moral limits to the means used to enforce them. The child-separation policy crosses any reasonable line. It inflicts harm grossly disproportionate to any offense. And most of that harm is suffered by children – people themselves innocent of wrongdoing. Even if their parents acted wrongly in trying to enter the United States, the children had little choice in the matter.

The essay is brief and well-written. You can read the whole thing here. I encourage you to share it widely.