“There’s something especially absurd about philosophers.”

Professor de Bres refers to Thomas Nagel‘s well-known account of absurdity in “The Absurd” (ungated version here), according to which feelings of absurdity arise from a clash, or quick flip, between the point of view of a person engaged in various relationships, activities, and pursuits, on the one hand, and on the other, the external perspective that observes that person from a distance, apart from the attitudes that frame the person’s sense of what he or she is doing.

Though Nagel says that we all adopt both the internal and external perspectives on our lives, some people clearly identify more with one than the other. And some of these people cluster in professions where one perspective is disproportionately valued. Academic philosophy is one such profession. When people say: ‘Let’s be philosophical about this,’ they mean: ‘Let’s calm down, step back, detach.’ The philosopher, in the public imagination, is set apart from the mundane concerns and fiery attachments that govern the rest of humanity. He or she takes the external perspective on pretty much everything. When Søren Kierkegaard collapsed at a party and people tried to help him up, he allegedly said: ‘Oh, leave it. Let the maid sweep it up in the morning.’

If this image is accurate, and if Nagel’s account is right, philosophers, parked forever in only one of Nagel’s perspectives, will escape the absurdity of the human condition. We philosophers, however, are among the most absurd people I’ve ever met. The reason for this has a whiff of paradox. Abstraction and detachment might be a philosopher’s stock-in-trade, but philosophers are often fiercely attached to those very things: passionate about impassion, abstract in the most concrete of ways. They spend years working obsessively on papers with titles such as ‘Nonreducible Supervenient Causation’ and then have public brawls about them at conferences. This is part of philosophy’s charm for me. There’s something especially absurd, yes, but also endearing, about people who are so serious about their core life endeavour that they regularly forget its ridiculous aspects, even though the endeavour itself is meant to serve as a perpetual reminder. 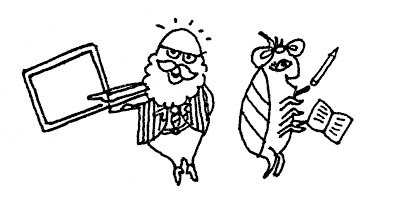 Helena de Bres, image from “The Pink Guide to Philosophy”

I think, from what I have seen on documentaries and those I have met, including the Vatican’s, astronomers may be even more absurd. But this is not a negative. In a world that is violent, insane, and such, absurd as philosophers and astronomers are we/they are holding the barbarians from the door (as Alistair MacIntyre might say.Report

I think there is absurdity in philosophy, but I’m not seeing it in these examples. It’s ironic for someone to be passionate about being dispassionate, but there’s nothing odd in itself about holding that we should behave better than we do in some respect.Report

There is hypocrisy on every side if you want to examine it all with a microscope. But for many, those examples are just fleeting anomalies, statistical outliers, flights of whimsy. The most dispassionate, objective minded philosopher can still get angry. And so what? What does that prove? We are all human after all. The real point of this attempt to externalize is that we shouldn’t be solely governed by our basest desires and drives. We should celebrate that which separates us from almost every other species on Earth, our unique ability to reason and understand, as it is the pinnacle of our cognitive evolution. (I am in no way saying that some other animals aren’t capable of reason, but there is insufficient evidence to assume that any do so as well as us.) Focus on that which makes us unique. That level of thinking that separates us from other animals is arguably what makes us human.

Most philosophers I’ve met are the most down to earth people you could ever meet. They can take abstractions of abstractions, and go so far that they lose all connection to reality. But that’s just thought exercise, because immediately after such pensive reflection they can come right back to the present. They are so adept at taking 5 second mental vacations and still be functional in the here and now. Not at all what I would call absurd.Report

SCH on 36 Answers to “What Is the Value of Philosophy?” (updated)

Lay people still have a very stereotypical view of academic philosophy. This is understandable seeing how for thousands of years it’s always been a “boys’ […]

"Why not celebrate and be grateful for both?" The answer many will give is that this project will be (much?) more likely to excite those who […]

Isn't there room for both projects? The person who took the time to make this video has devoted a great deal of energy to popularizing philosophy […]

Helen De Cruz on 36 Answers to “What Is the Value of Philosophy?” (updated)

The lack of demographic diversity in this video and the channel in general reveals something about the changes in our profession. These changes are fairly […]