Rapper Kanye West has revealed that he is writing a philosophy book.

This information came to light in an interview that West, one of the best-selling musical artists of all time, was conducting with his interior designer Axel Vervoordt.

West asks Vervoordt, “If you had to live in another time period, what would you pick?” Veervoordt replies, “I don’t know, I never even thought about it because I live now, as in now, the past, the future is present. Why should I want to live in another time period?” Then West says: “Yeah. … Really big, be here now, now be here. I go to an extreme. I’ve got this new concept that I’ve been diggin’ into. I’m writing a philosophy book right now called Break the Simulation.” 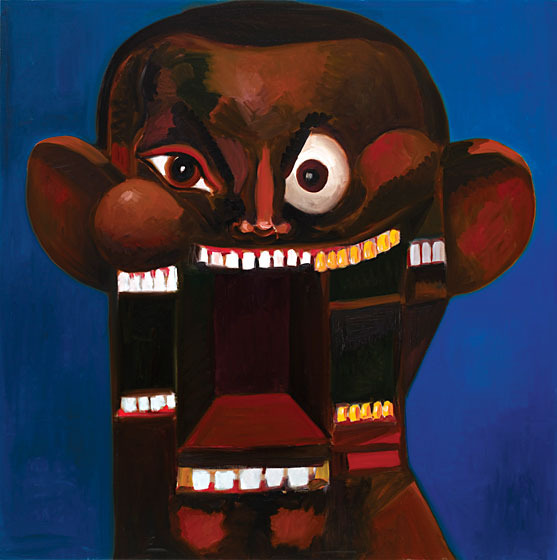 What’s the book about? West elaborates a bit:

And I’ve got this philosophy—or let’s say it’s just a concept because sometimes philosophy sounds too heavy-handed. I’ve got a concept about photographs, and I’m on the fence about photographs—about human beings being obsessed with photographs—because it takes you out of the now and transports you into the past or transports you into the future. It can be used to document, but a lot of times it overtakes [people]. People dwell too much in the memories. People always wanna hear the history of something, which is important, but I think it there’s too much of an importance put on history.

This isn’t West’s first engagement with philosophy. In 2012 he was sued by another musician, Vincent Peters, who accused him of stealing his lyrics for the song “Stronger.” West’s defense: the words were borrowed not from Peters but from Nietzsche. He won.

We don’t know much about the content of Kanye’s book, but perhaps we could nonetheless offer him some advice. Whose work should he read? With which philosophers should he consult? At which conferences should he present his ideas?

I should of course mention, Kanye, in case you’re reading this, that I’d be open to considering a guest post from you about the ideas in your book—doing so would put you in a position to receive helpful feedback from thousands of philosophers from around the world. Just have your people contact   me.

And of course, this is an opportunity for the philosophical community. Philosophy is being mentioned in venues that typically ignore it. Philosophers may want to take advantage of the publicity.

UPDATE 1: As Joshua Blanchard (UNC) reminded me, this book by Kim Kierkegaardashian is in the works, too.

UPDATE 2: West has been tweeting “philosophically” since announcing his book project. Philosopher Lauren Ware (Kent) tries to figure out what he’s saying.

Kendall Walton seems like an obvious point of reference.Report

“Whose work should he read? With which philosophers should he consult? At which conferences should he present his ideas?”

Perhaps a good place to start (assuming West isn’t already familiar) would be Kendall Walton’s work on transparent pictures, which would lend support to the notion that we can be transported to the past when looking at photographs. If West is interested in presenting at a conference, the American Society for Aesthetics annual meeting would be a wonderful venue, provided its members could avoid treating West with the same condescension that they did Fahamu Pecou in 2017 (which was covered extensively on this blog).

(I trust that West’s remarks were published on this blog and that you ask the questions above in a spirit entirely different from the one behind the treatment of Pecou at that event. You can’t be surprised by the number of ‘haha’ reactions on the Facebook mirror of this post, but I’m sure you posted this for many good reasons, and *not* simply to get a chuckle out of your readership at West’s expense).Report

Personally, I find this depressing. No matter how good or bad his book, it will for sure sell more copies than any of mine ever do.Report

Worse, a book written by someone like Mr. West (with all due respect to him and his ideas) would more likely mis-represent the discipline to a lot of people who are unfamiliar with philosophy, classical or current.Report

Yo Kanye, Imma let you finish your book but Susan Sontag had one of the best philosophical reflections on photography and temporality of all time. Of. All. Time.Report

It sounds as if West is coming at this from, inter alia, the point of view of someone personally suffocated by marketing, paparazzi, Instagram, etc., images in, for a notable example, the popular music industry. That would be a refreshing change from the rather gentle – arty, distant – exposure that analytic philosophers have had. And I presume West has an entirely different, or at any rate additional, philosophical training, one founded on the critical race theories expressed through hip-hop.

Hopefully the book will come out. It seems like it might (just about, which is as much as we can hope for anything) have the potential to do wonderful things for the philosophy of photography. I just hope he doesn’t spend *too* much time learning how academic philosophers do things.Report

Kanye West makes it pretty clear that he makes no claims to be representing the discipline of philosophy when he says that the very word ‘philosophy’ might be a misleading one to use in connection with his project. It does sound pretty philosophical and, since philosophy is hard to do well, I doubt his book will be very good. But the more people ask questions like the ones he seems to be asking the better. And I’m glad someone so popular is taking ideas seriously.Report

I think this is great.

A relevant excerpt from that essay, in which Percy is trying to critique what has happened to our ability to authentically experience the world (when it has been, and we are interested in, packaging it for consumption):

“Seeing the canyon is made even more difficult by what the sightseer does when the moment arrives, when sovereign knower confronts the thing to be known. Instead of looking at it, he photographs it. There is no confrontation at all. At the end of forty years of preformulation and with the Grand Canyon yawning at his feet, what does he do? He waives his right of seeing and knowing and records symbols for the next forty years. For him there is no present; there is only the past of what has been formulated and seen and the future of what has been formulated and not seen. The present is surrendered to the past and the future.”

Whether the book appears to succeed or fail according to philosopher’s standards, I think it could well be interesting and worth thinking about.Report