How do we decide whether a metaphysical system is the right one or not? Empirical evidence doesn’t seem to be decisive, and given that some metaphysicians have impossible worlds and Meinongian objects it seems anything might happen in such a system. Are all metaphysical issues undecidable—and extending this thought to philosophy generally do you agree with the thought that philosophical questions are also generally without a decisive right answer, that every and any philosophical question can be reopened and rethought?

This is a very hard question. I wouldn’t say that all metaphysical questions are undecidable. I know that I exist, and I think I have very good evidence that I am a material object who is made of other material objects. So I have at least one good reason to believe that compositional nihilism is false. Is this a conclusive argument? It probably won’t convince the diehard compositional nihilist! But that doesn’t mean it is unsound, and it doesn’t mean that I don’t have a reason to believe the conclusion on the basis of that argument. But since I also think that being comes in degrees, there is a further question about how real I am that isn’t settled by this argument. Answering this further question is much harder I think.

Some of this agreement might be the result of culpably ignoring alternative views that should be taken seriously, or the philosophical milieu interlocutors are in. Academic philosophy is, for better or worse, subject to fads too, and the increasing arms race to publish might make this worse.

That we can rule out some answers to metaphysical questions fairly decisively doesn’t mean that we can rule in exactly one. With respect to questions in fundamental metaphysics, disciplined and humble speculation might be the best we can hope for.

The whole interview, which covers a good selection of McDaniel’s broad-ranging interests, is here. 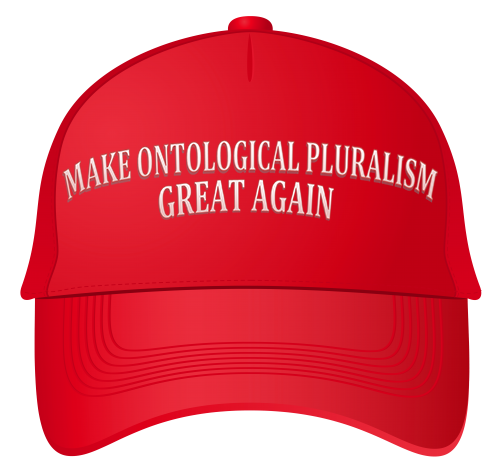 Great. Excellent article. It is like the great method of philosophy.Report

Compositional Nihilism fits the definition of undecideable. Model the world according to compositional nihilism–in other words, create a model of the world in which all the mereological simples exist, and in that model, do not affirm the existence of anything else. Now, consider the statement “Something other than mereological simples exists.” We could add this to the model consistently. But we could also add its negation to the model consistently. (In this second model, adding that negation in creates new implications for what exists that did not exist before the addition, but this is not in contradiction with what the model said before. It is just the addition of a new axiom so to speak.)

That’s exactly what it means for a matter to be undecideable in a model–both it and its negation can consistently be added to that model.

Here I’m relying on a concept of undecideability taken from model theory, which may seem a little beside the point. But what other basis would there be for deciding whether the sentence “There exist things other than mereological simples” is true, i.e., what other basis than simply deciding “we’re going to model things that way?” If the model both with and without nihilism are equally compatible with all known facts, then while there can be bases for deciding one over the other, they are not determined by how the world is. They’re determined by something else.

McDaniel remarks that he thinks there are strong reasons to think compositional nihilism is false, and later on he refers to facts such as that we all know that mereological compounds exist not just in New Jersey, but elsewhere as well. What is this “knowing” though? How do we know? On what basis do we decide? If it’s just a strong intuition we all share and agree to act on together, then first, see all the recent skeptical lit about intuitions, and second, notice how that is in itself a decision to affirm a metaphysical claim based, not on how the world is, but on how we are and how we cooperate. A community which would insist on compositional nihilism doesn’t face a burden of proof–it faces a burden of non-cooperation.Report