Dan Nemrodov, a post-doctoral fellow in the lab of psychology professor Adrian Nestor at the University of Toronto-Scarborough, is working on a way to use electroencephalography (EEG) and machine learning to digitally reconstruct the images that subjects are seeing. In other words, he is developing a kind of mind reading technology. 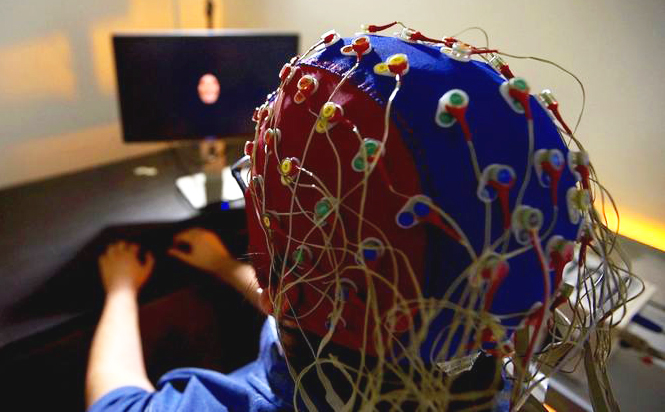 A subject in a study by Professor Dan Nemrodov (Toronto) has his brain activity read by an EEG machine.

[Nemrodov] straps a hat with electrodes on someone’s head and then shows them pictures of faces. By reading brain activity with an electroencephalography (EEG) machine, he’s then able to reconstruct faces with almost perfect accuracy. Student participants wearing the cap look at a collection of faces for two hours. At the same time, the EEG software recognizes patterns relating to certain facial features found in the photos. Machine-learning algorithms are then used to recreate the images based on the EEG data, in some cases within 98-per-cent accuracy.

The image below shows, on the left side, the faces a subject was shown, and on the right side, the machine-learning’s digital construction of the image based on the subject’s EEG data. (The percentage figures refer to the degree of accuracy of the reconstruction.) 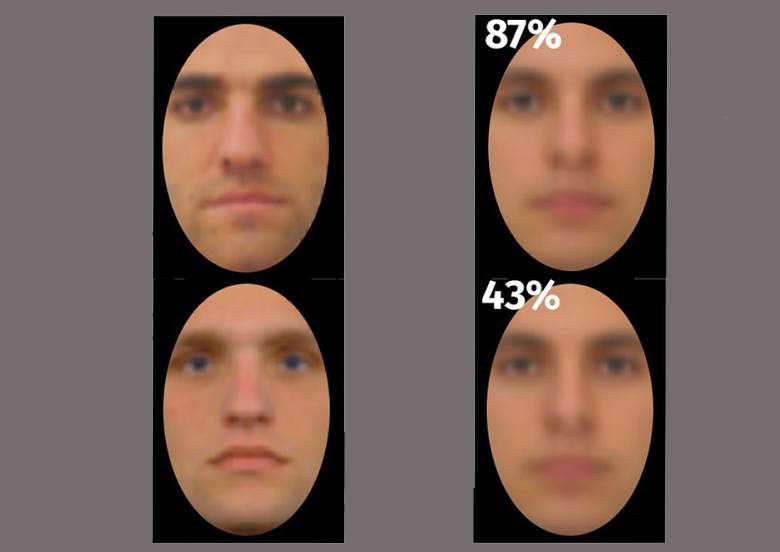 This isn’t the only recent attempt at developing mind-reading technology. Other teams have used functional magnetic resonance imaging (fMRI) to try to reconstruct what subjects are thinking.

Marcel Just, a psychologist at Carnegie Mellon University, is pairing fMRI data and machine learning to identify the “correspondence between thoughts and brain activation patterns” and see “what the thoughts are built of.” By looking at blood flow patterns in the brain, the technology is able to identify thoughts like “The witness shouted during the trial” or “I like to eat bananas in evening with my friends.” There’s more about this kind of work here, here, and here.

These technologies are still in their infancy, but it is not hard to imagine them developing in increasingly sophisticated ways, and it is interesting to speculate both about the uses to which it would be put—communications for the impaired or ill, evidence for criminal investigations, opportunities for commercial data mining, new forms of art creation, etc.—and its relevance to various philosophical positions regarding the mind, perception, action, etc., elaboration on which I’ll leave to philosophers working in those areas.

Matthew R Berg on Philosophy's Most Beautiful Sentence or Paragraph

Anything by the stoics, especially Seneca and Aurelius. "Dwell on the beauty of life. Watch the stars, and see yourself running with them." -Marcu Aurelius

George on Philosophy's Most Beautiful Sentence or Paragraph

What does it mean, 'the old god is dead' for you personally?