A group of scholars have undertaken a plan to design and erect a memorial monument for philosopher Charles Sanders Peirce, to replace the existing gravesite markers, which have fallen into disrepair.

The group is seeking donations to help with the project, which they estimate will cost around $20,000. You can learn more about the project and donate here. Below, I’ve included text and images from a letter sent out by Nathan Houser (Indiana Univ. at Indianapolis), Rossella Fabbrichesi (Università degli Studi della Milano), and Robert Cummings Neville (Boston University), who are spearheading the project.

Soon after their marriage, Peirce and Juliette moved to Milford, Pennsylvania, where they resided until Charles’s death in 1914. For the remainder of her impoverished life, Juliette kept the urn with Peirce’s ashes on a mantel at their home, Arisbe. When Juliette died in 1934, Pennsylvania Governor Gifford Pinchot, a friend of the Peirces with a grand home in Milford, arranged for Juliette’s burial in the local cemetery near the Pinchot family plots. The urn with Peirce’s ashes was placed in the casket with Juliette and was interred with her. A small inconspicuous tombstone was erected to mark the grave.

In August 2014, after the close of the International Peirce Congress in Lowell, Massachusetts, a group of Peirce scholars travelled to Milford to install and dedicate a commemorative plaque in Peirce’s study at Arisbe. This excursion to Milford, arranged for by Rosa Mayorga, included a visit to the Milford Cemetery to visit Peirce’s grave. Even the few who had visited Peirce’s grave before and who knew approximately where it was located had difficulty finding it. We were told stories of visitors from around the world who had tried in vain to find Peirce’s burial place. Once located, it was easy to see why the grave is hard to find. The tombstone is small and slightly askew and the urn beside it was broken in two. It is a very unimpressive marker indexing the final resting place of the man who many believe to be America’s greatest philosopher. 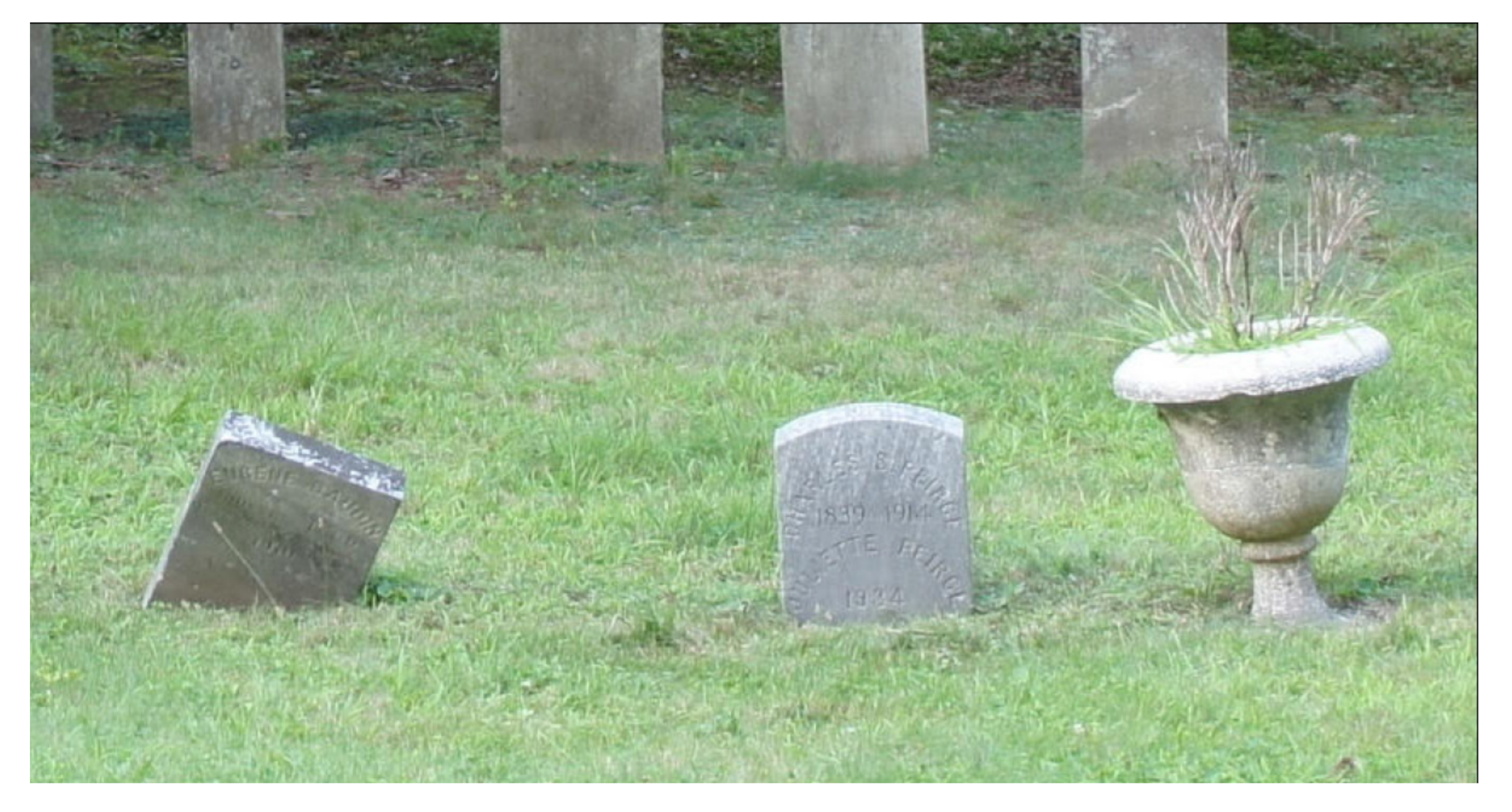 The Lowell group who made the trek to the grave site, following so soon after the Lowell Congress where Peirce’s intellectual achievements were celebrated by over 250 scholars from at least 25 countries, were unanimous in feeling troubled by the disregard, and even seeming disrespect, signified by the paltry and decrepit monument to the man. A decision was made to rectify this neglect and to arrange for a monument more suitable as a manifestation of Peirce’s intellectual weight.

Following this group visit to Milford, Demetra Sfendoni-Mentzou, then President of the Peirce Society, appointed a special committee, composed of members of the Peirce Society and the Peirce Foundation and chaired by Rosa Mayorga, to develop plans for a more satisfactory memorial. This committee secured the necessary permissions to erect a new monument on the grave site and adopted a monument plan designed by Céline Poisson, Professor at the School of Design at the University of Quebec at Montreal: 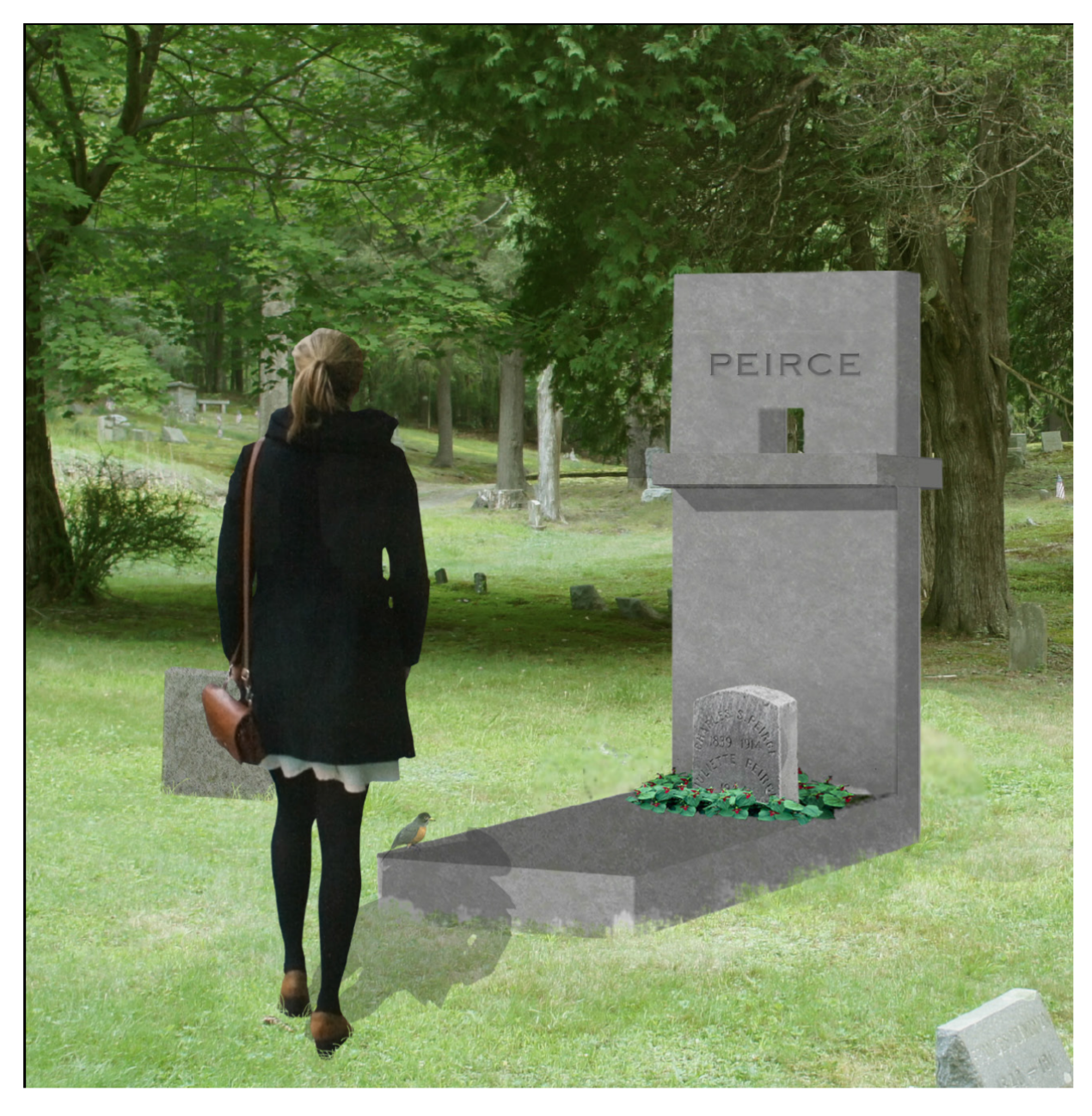 This plan has now moved to the funding and implementation stage. The estimated cost for construction of this monument is $16,250.00 in addition to costs related to the planning and design phases. To cover these costs we seek to raise $20,000.00 and hope that you will help us achieve this goal. We ask you to make a generous donation. To make sure this project succeeds, we would like to be able to make definite arrangements for the construction of the monument as soon as possible. Therefore, we urge you to make your contribution right away if you can. To learn more about the project and to donate, please visit: monument.peirce-foundation.org.

Please send your contributions to the Peirce Foundation. The Foundation, which is a 501(c)3 corporation, will provide you with a receipt for tax purposes. The Monument Project page will provide regular updates on progress toward our goal. Any funds received in excess of the final project cost will be used for annual upkeep. Thank you for helping make this happen!

I hope this endeavor succeeds. I lived in Milford until I was five years old and my parents still have a house in the area. Once on a visit after I got into philosophy I tried to find the house where Peirce had lived — but I never thought to look for his gravesite. Milford is a beautiful town about 90 minutes outside of New York City, with a cool little arts and music scene. It’s worth a visit if you are in the area.Report

Donate people! Not only did Peirce give us pragmatism, fallibilism, abduction, semiotics, existential graphs, and the type-token distinction, he gave is such quotable philosophical lines, such as “let us not pretend to doubt in philosophy what we do not doubt in our hearts”.Report

Peirce lived an interesting but sad life. Despite his brilliance, he never received a permanent academic position, and the only full-time position he held–as a lecturer at the young John Hopkins–was unjustly stripped away for personal reasons (viz., moral disapproval). I like to think of him as the patron saint (or heretic…) of contingent faculty life. Moreover, he suffered from trigeminal neuralgia, for which the only treatment at the time was the use of morphine or cocaine, and likely had bipolar disorder as well.

Harvard systematically suppressed much of his writing for decades (the archives being their property), and only recently has it started to become more widely available, thanks to work of men like the late Tom Sebeok, and the above-mentioned Nathan Houser.

For anyone interested in Peirce’s life and looking for an entertaining introduction to his thought, I recommend Joseph Brent’s biography: https://www.amazon.com/Charles-Sanders-Peirce-Joseph-Brent/dp/0253312671/Report

“If the immortal is also imperishable, it is impossible for the soul to perish when death comes against it. For, as our argument has shown, it will not admit death and will not be dead, just as the number three..

All, I think,” said Socrates, “would agree that God and the Principle of life, and anything else that is immortal, can never perish.”

“Then when death comes to a man, his mortal part, it seems, dies, but the immortal part goes away unharmed and undestroyed, withdrawing from death.”Report

The preposterous design of the monument is a desecration of the burial ground. How can these people think they have the right to claim and own one of the most significant remainders of this thinker’s life? Can somebody in America please stop these idle people?
Worried greetings from the Netherlands.Report

A monument for a man of Peirce’s – almost incomparable – size should be designed by a major artist, even if it would cost ten or more times the current estimate. The proposed design, however good it’s intentions, is a disgrace and a historical mistake of huge dimension. Please, rethink.Report