Too many of us have been denied economic security and equal opportunity. I have spent my life trying to address these societal problems. Now I want to take the fight to Congress.

Those are the words of Richard Dien Winfield, Distinguished Research Professor of Philosophy at the University of Georgia and Congressional candidate, running to represent Georgia’s 10th District in the House of Representatives. A prolific philosopher who has written on Hegel, political philosophy, ethics, aesthetics, metaphysics, and other topics, Dr. Winfield has taken leave of his professorial position, moving from teaching and writing about political matters to campaigning on them. 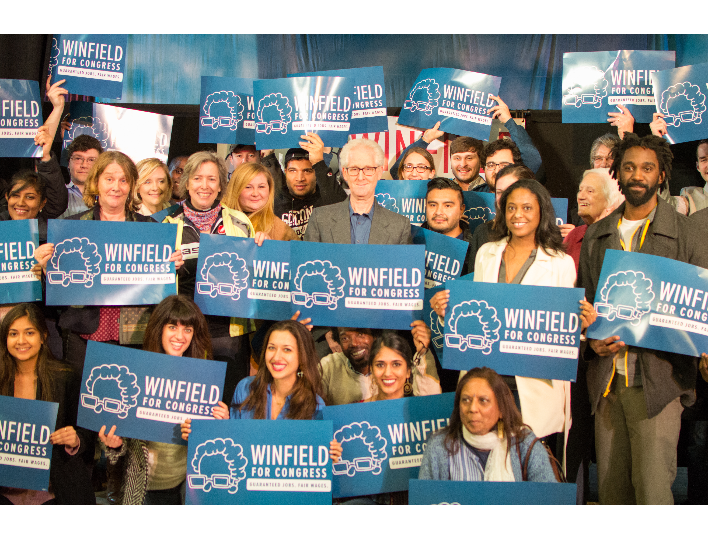 Professor Winfield recently took time from his busy campaigning schedule to answer several questions I sent him about his run for Congress. Feel free to ask follow-ups in the comments. I cannot promise he will answer them, but he may.

JW: Has being a philosopher or a professor prepared you to become a politician? If so, how?

Winfield: My philosophical investigations have established the theoretical basis of my campaign.  My campaign consists in fighting for a bold social bill of rights, anchored in guaranteed jobs at fair wages with employee empowerment.  These rights are not included in the impoverished conception of freedom that underlies our constitution and the classical liberal political philosophy (as well as its Rawlsian reformulation) that inspired its founders. I have laid out an alternative philosophical theory, establishing the exclusive normativity of self-determination and delineating the concrete structure of self-determination, which underlies my campaign. You should look at some of the books which, alas, have been largely ignored by the academy, in which I lay out a detailed ethics (some of the key titles are Reason and Justice, The Just Economy, The Just Family, Law in Civil Society, The Just State, and Rethinking Capital). Although my program must deal with the historical reality of our nation, which only empirical investigation can explore, it remains informed by the philosophical principles of the different spheres of freedom and how these spheres are intrinsically connected. My life as a professor has helped in that four decades of lecturing has prepared me to speak extemporaneously to people of different backgrounds and intellectual preparation on the issues of my campaign.

JW: Has being a philosopher or a professor been an obstacle to gaining support from certain populations, and if so, which ones?

Winfield: The only part of the electorate that so far seems bothered by my academic and philosophical identity are those who think that to win against the Republican incumbent, Jody Hice, who is a retrograde former Evangelical radio minister, a candidate must pander to the lowest common denominator. Everyone else I meet seems to respect professors and to be impressed that a philosopher has chosen to run for office.

JW: You’ve worked a lot on Hegel. Is there a way in which your policies or your approach to political thinking is Hegelian?

Winfield: My whole campaign for a bold social rights agenda anchored on guaranteed jobs is inspired by Hegel’s Philosophy of Right, which, when duly corrected (such as many of my 21 books have attempted to do), provides a more systematic account of the institutions of self-determination than the truncated version advanced by classical liberal political theory and its contemporary analogues.

JW: Over the past couple of years, it seems as if respect for expertise is diminishing. (Consider, for example, some of the people lacking in training, experience, and credentials appointed by President Trump to some high-level positions government positions.) It would seem that being an effective politician involves certain kinds of expertise. By starting your political career at the Federal level, are you, too, failing to adequately respect expertise?

Winfield: Neither philosophy nor politics is a craft, governed by technical parameters, where a given end is realized using skill to impose it upon given material. True philosophy and politics are fundamentally self-determined and freedom is not a craft. Max Weber, Lenin, and Trump all regard politics as a matter of technical manipulation, where experts are called in to administer society to achieve given ends. I am starting my descent into the cave by seeking electoral office because the big problems can only be addressed at the national level. Municipal and state government are highly restricted in what they can accomplish and our democracy is in a genuine crisis that calls for bold encompassing remedies.

JW: Do you have policy experts working with you?

Winfield: I do not have campaign expert advisors, but I do read the work of economists and law professors who have advocated a Federal Job Guarantee (such as William Darity, Darrick Hamilton, and Philip Harvey).  I recently participated in a Ford Foundation convening in NYC on a Federal Job Guarantee, which brought together many academics and activists concerned with this measure and I certainly benefited from the exchange.

JW: One of your policy proposals is guaranteed employment at a minimum of $20/hour. Do economists and policy experts support this proposal?

Winfield: Some of the current economists who favor a Federal Job Guarantee are William Darity, Darrick Hamilton, Pavlina Tcherneva, L. Randall Wray, and Stephanie Kelton.  They do not themselves advocate a $20/hr fair minimum wage, but I do think they all support it and the fundamental principle that wages should rise with productivity increases.

JW: Your platform on racial justice consists of policies to alleviate poverty. Yet some issues of racial injustice, such as those raised by the Black Lives Matter movement, are not directly problems of poverty. Do you have measures in your platform that address those issues?

Winfield: If you look at the Movement for Black Lives Platform you will see that my platform includes virtually all the measures they advocate, including in their section on Reparations. I am for fundamental reforms in our legal system to prevent wealth from determining our legal status (ending bail, legal care for all), as well as advocating ending any deprivation of voting rights ever (for incarceration), decriminalizing all personal drug use, fixing our schools (on the basis of poverty eradication and work and family balancing) with equal financing per student for all school districts, increasing pay and qualifications for public school teachers, and enhancing the curriculum (including two years of philosophy in high school). I am also for stringent gun control, de-militarizing police, having independent investigations of all instances of police use of violence on civilians. The main difference between my platform and that of the Black Lives Matter movement is that what they advocate for African Americans I extend to everyone, with the understanding that the general extension of rights has a special benefit in combatting intergenerational racial disadvantage. As Nietzsche observed in portraying Democracy, Socialism, and Christianity as slave moralities, when rights are extended, the universal opportunities they involve benefit disproportionately those who have suffered disproportionate oppression.

JW: You don’t come right out and say it but you seem to imply that you are for the legalization of various drugs. Could you clarify your policy stance on that?

Winfield: I am for legalizing personal use of all drugs and for providing those drugs to addicts under medical supervision (free of charge as part of a single payer health care system covering all physical, mental, and dental care with no copays or deductibles or drug charges). This will deal a huge blow to the drug cartels, reduce much of our mass incarceration (particularly of people of color), and enhance the general health of our society.

JW: You argue for a progressive income tax in which funding for government programs is shifted to “those most able to pay for it “. The current head of household tax rate on income over $235,351 is 39.6%.Would you propose to raise that rate? Or do you favor other tax reform measures to increase revenue collection from the wealthy, and if so, which measures?

Winfield: I favor raising the income tax solely on the top 10% and imposing a highly graduated wealth tax on the top 10% to cover all new expenses of my social rights agenda. Those at the top 1% of wealth, who have as much wealth as the bottom 90%, should be the biggest contributors.The wealth and income graduated tax rates should be calculated by the IRS once the spending needs are determined. It need not be specified in tax legislation itself.

JW: Do you think that it would be good if more philosophers occupied public office (rather than other academics, such as economists or political scientists)?

Winfield: It would be good if more philosophers occupied public office, but our current academy contains more gravediggers of philosophy (who preach the impotence of reason and attempt to cure us of philosophical investigation) than genuine philosophers.

You can learn more about Richard Dien Winfield’s campaign here, and see some of his videos here.