The motion filed by Laura Kipnis and her publisher, Harper Collins, to have philosophy graduate student “Jane Doe”‘s lawsuit against them dismissed has been denied.

The defendants moved to have all of the claims dismissed. The Judge, John Robert Blakey, denied the motion in a decision released yesterday. The text of the decision is here (via Leiter Reports). 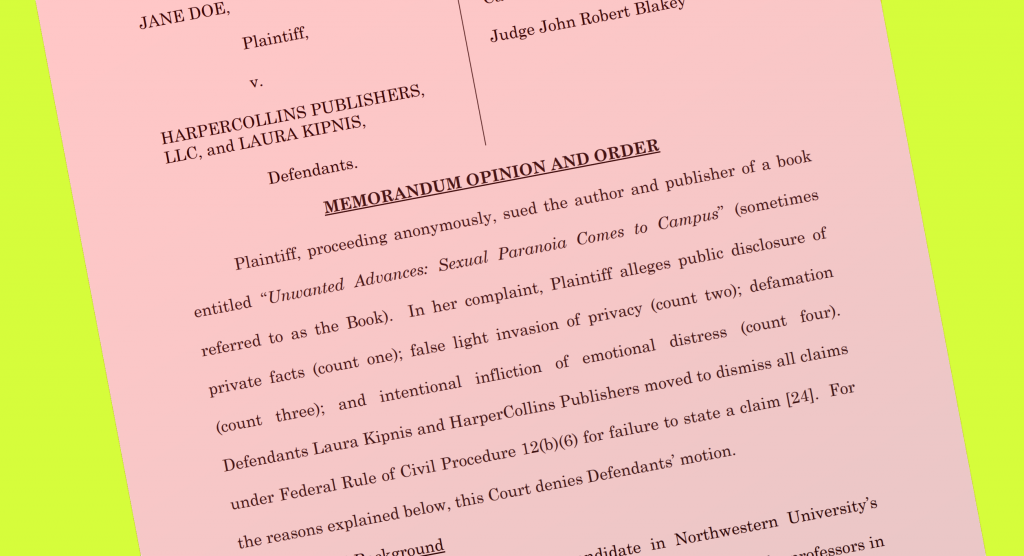 I have opinions on this suit that are totally irrelevant to anything. I don’t have all the information I would need to come to a good decision. I haven’t even read the lawsuit. So you would be absolutely right in saying you don’t give a flying **** off a rolling doughnut what I have to say about it.

And that’s exactly why it’s good that the suit is moving forward. The whole point is to allow it to be adjudicated according to the principles of the applicable law. If Kipnis et al’s lawyers hadn’t moved to dismiss, they would have been less than zealous. But the judge likely made the right call.Report

D.C.
Reply to  Will Behun

I agree with Will; a motion to dismiss under 12(b)(6) (called a demurrer in olden times) is a standard response to a complaint, and I doubt the defendant’s attorneys expected it to work. They might have hoped one or two of the counts would get thrown out, but it’s clear that there are factual issues that would survive a motion to dismiss.Report

My fav line is from your final letter in the exchange: "Finally, we note that Machery's repeated invocation of how much remains unsettled “30 years […]

David, this is a helpful intervention in this debate. If Edouard’s point is in fact only (2), then I strongly agree with him. Research on […]

Differences in reaction times for (variations on) Black/Unpleasant v. White/Unpleasant cannot simply be attributed to racial attitudes, prejudice, or the like. They *may* capture […]

Yuanjin Xia on New: Journal of Social and Political Philosophy