Two weeks ago, the British government’s Home Office rejected the asylum request of Hamza Bin Walayat because, while he described himself as a “humanist” worried about religious persecution in his home country of Pakistan, be could not answer questions about Plato and Aristotle. Now, 120 philosophers have signed onto a letter objecting to the decision.

The Guardian describes why Walayat applied for asylum and why the application was denied:

Walayat said he had received death threats from members of his family and community in Pakistan after renouncing Islam, integrating into secular British life, forming a relationship with a non-Muslim partner and refusing to conform to the expectations of conservative Islam. Apostates are subject to discrimination, persecution and violence in Pakistan, and blasphemy is punishable by death under Pakistani law.

In its letter of refusal, the Home Office said Walayat had “been unable to provide a consistent or credible account with regards the main aspect of your claim, namely that you are a humanist”. When tested on his knowledge of humanism, Walayat gave a “basic definition” but could not identify “any famous Greek philosophers who were humanistic”. His interviewer has informed Walayat that he was referring to Plato and Aristotle.

The letter from the philosophers was published at Humanism.org and is reprinted in full, below:

We write as members of the international community of academic philosophers, including many from the UK. We ask you to reconsider the decision to refuse Hamza bin Walayat’s request for asylum on the grounds of his inability to answer correctly questions about ancient Greek philosophers (Plato and Aristotle). We are puzzled by the presupposition of the Home Office that knowledge of these philosophers is a requirement for authentic self-identification as a humanist.

In particular, we would like to draw attention to the following:

Therefore, we deem it unreasonable for the Home Office to make decisions about asylum on the basis of anyone’s philosophical sophistication. The decision concerning Hamza bin Walayat’s asylum request should therefore be reconsidered immediately.

The letter and its signatories can be found here. An abbreviated version was published in The Guardian. There’s some further reporting in The Guardian here. 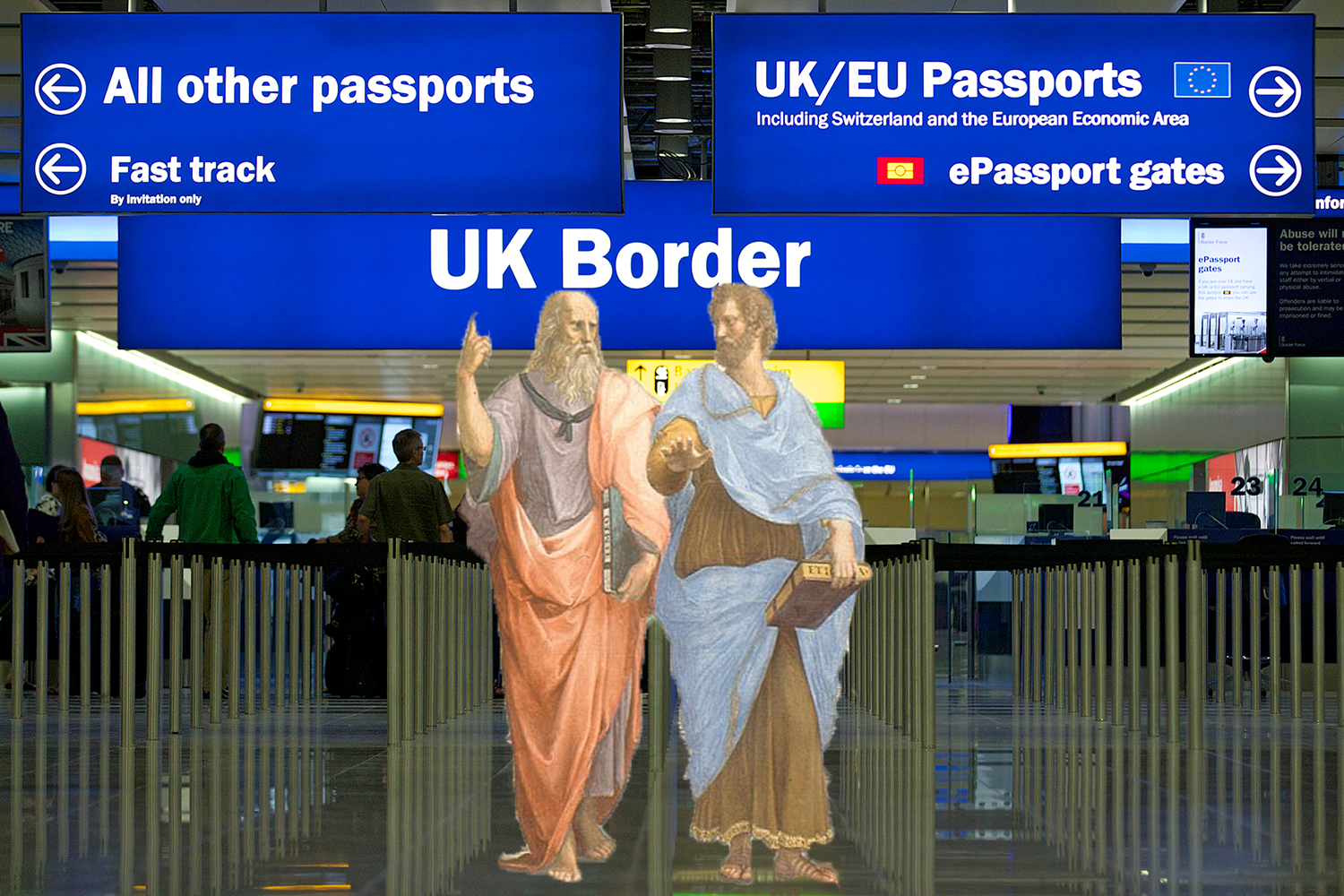 Perhaps I’m mistaken, but i think this is false: “central to humanist thinking is the rejection of religious belief”. (That’s not a quote from the letter, but accurately seems to reflect the letter’s views.) This may be true of secular humanism, but there are religious varieties of humanism. While this is a bit nitpicky (and I would ordinarily assume a self-described humanist was of the secular variety), it seems like a pretty significant failure of precision in a letter attempting to correct a (profoundly stupid and immoral) decision by a government on the basis of said decision’s poor philosophy.

It also seems to invite litigation over whether Aristotle and Plato should “count” as humanists, rather than underscoring the actual strong point of the letter: it’s patently outrageous to demand that people of a secular background prove their familiarity with a particular corpus of philosophical work to count as sufficiently secular that they’re in danger in an Islamic theocracy.

While it is always a bit risky to comment on legal proceedings without having read more than (a few) news reports on them (*), as someone who works on refugees, and who has represented asylum seekers in legal proceedings (in the US), I wanted to add a few thoughts. I should say that the legal basis for refugee/asylum law is fairly similar all over, but there are important differences in evidentiary standards and procedural rules in different countries, and I’m not an expert on those in the UK.

To be granted asylum (as opposed to some other form of relief) the applicant must have a “well founded fear” of persecution on the basis of a “protected ground” – race, nationality, religion, political opinion, or membership in a particular social group. The claim here could plausibly be seen as a religion, political opinion, or membership in a particular social group (“apostates”) claim. It’s always necessary to provide some evidence that one has the trait that forms the basis of persecution. That seems to be the issue here. In the US, the standard would be “more likely than not” that the person has the trait claimed. Coherent, consistent, and credible testimony on the part of the applicant can suffice for this (again, in the US), but if that’s all the evidence one has, it’s hard. That said, it does sound like the applicant had more than just bare testimony – various behavioral factors listed above would be evidence for the claim, too. In the US, in cases involving religious belief, it’s normal for an immigration judge or asylum officer to ask the applicant a bit about the religion – so, if someone from Indonesia or China claims to be facing persecution for converting to Christianity (a not unusual claim), the applicant would be expected to be able to say something about the basics of Christian belief, and what they believe. The official in this case seems to have gone significantly beyond that, doing something that would be, at best, much more akin to asking someone in the conversion to Christianity scenario about the nature of the debate between Martin Luther and the Catholic Church, or what the differences between Orthodox and Catholic Christianity are, or even to give a coherent philosophical account of the trinity – things that very larger percentages of honest believers in Christianity can’t do. If the case was framed not as a religious belief claim but as a “social group” claim, then the requirement to provide information about historical figures becomes even less reasonable.

So, assuming the accounts are fairly accurate, the denial seems to be inconsistent with normally accepted legal standards. It would almost certainly be over-turned (and perhaps remanded) on appeal in the US, but I’m not sure what procedures are possible in the UK, but hopefully something similar is possible. The general idea that an applicant has to provide evidence for a claimed ground of persecution is well established and reasonable, but the particular application in this case seems pretty clearly wrong, no matter how the case was framed.

(*) News reports on legal cases are very often misleading and confused. It’s always risky to make substantive judgments based on them, but here, It’s probably not easy, if possible at all, to find the actual legal materials. If they are available, it would be interesting to see them.Report