Which figures in the history of philosophy are philosophers today paying most attention to? In a recent editorial in the British Journal for the History of Philosophy (BJHP), editor Michael Beaney (KCL, Humboldt) surveys recent publications to identify what changes have taken place in who is popular among historians of philosophy, and what changes he thinks should be in store.

Here are the 16 most-discussed historical philosophers in the BJHP for the 20 year period ending five years ago (see note, below, on how these numbers were calculated): 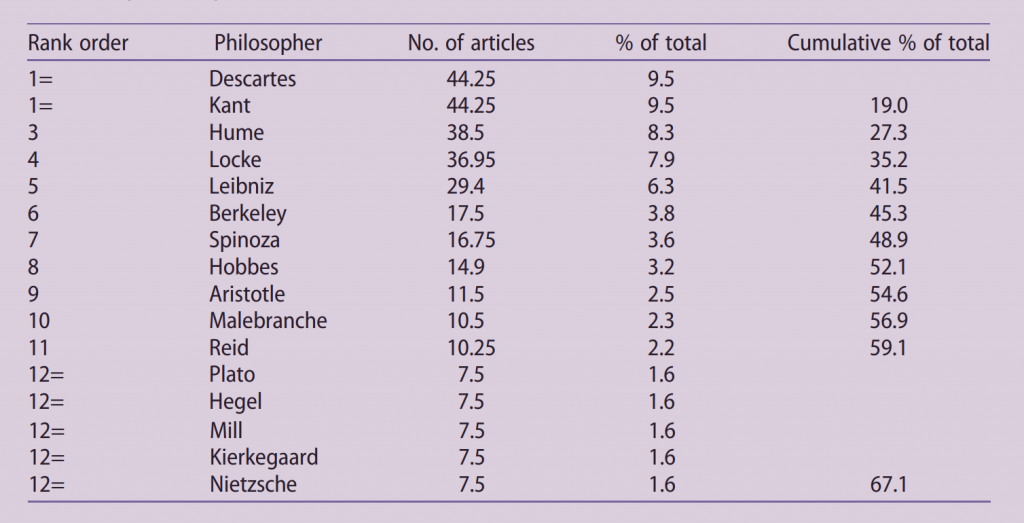 The most written-about philosophers in the British Journal for the History of Philosophy during its first 20 years (a period which ends five years ago).

Professor Beaney notes that over  the first twenty years of the journal, “nearly half the articles published had been on just the ‘big seven’ of early modern philosophy and two-thirds on just sixteen philosophers.” How have things changed? He writes:

Over the last five years, articles have appeared on eighty-two philosophers, traditions or topics that have not been represented in the BJHP before. This has resulted in a significant reduction in the proportion of articles published on the ‘big seven’, from 49% to 20%, and on the ‘big sixteen’, from 67% to 40%, though there is now a new ‘top sixteen’ that takes up 45% of the journal.

Here are the new “big sixteen”—the most-discussed historical philosophers in the five most recent volumes (21-25) of the BJHP: 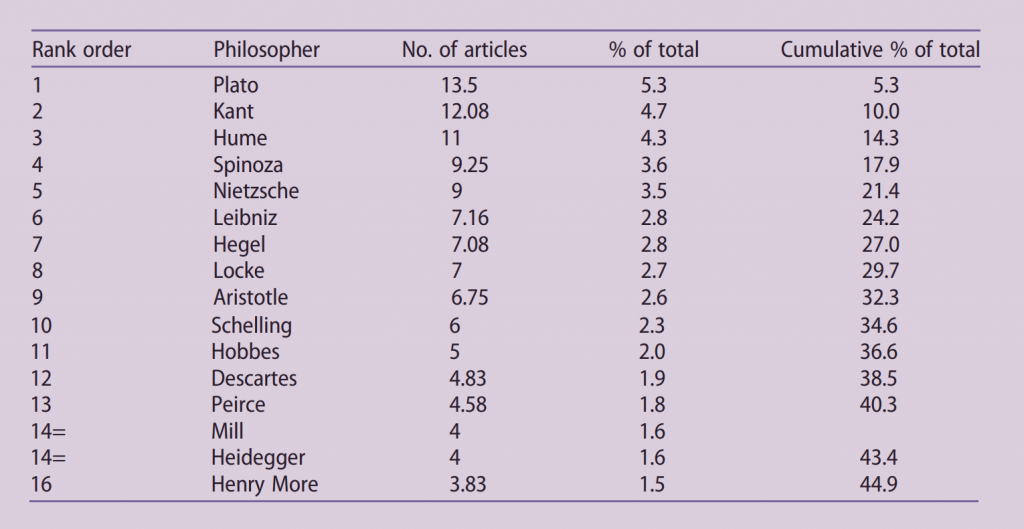 The most written-about philosophers in the five most recent volumes (21-25) of the British Journal for the History of Philosophy.

He then looked at how frequently the 16 philosophers noted in the first table have been discussed in the past five years of a different journal, the Journal of the History of Philosophy (JHP): 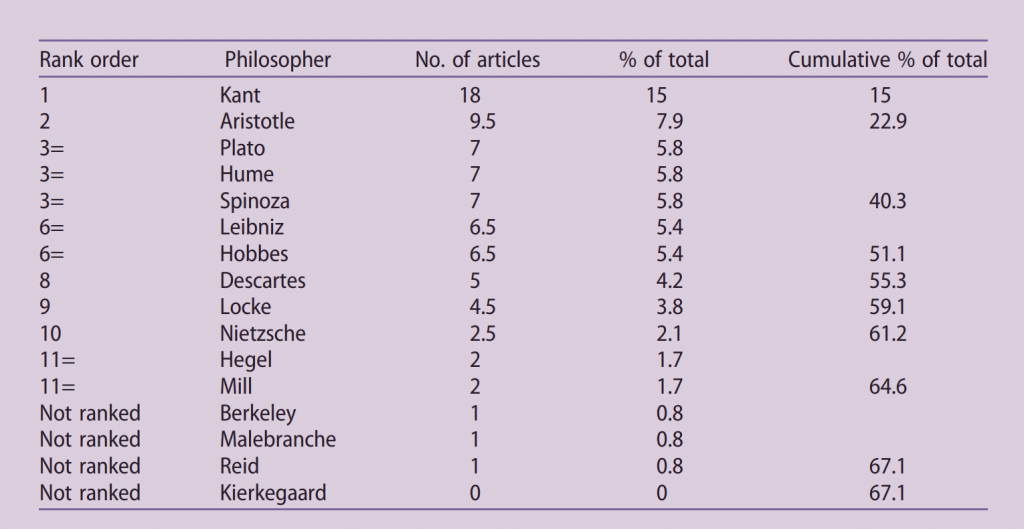 The philosophers most written-about in the Journal for the History of Philosophy over the past five years (2013-17).

Comparing the two journals, he writes:

As far as the total percentage for these sixteen philosophers is concerned (67.1%), this is identical to that for the first twenty volumes of the BJHP. Kant is well out in front, however, and Plato and Aristotle, too, have a much larger share. Spinoza comes much higher, and Berkeley much lower, but this is in line with what we have experienced at the BJHP over the last five years, as noted above.

He also notes the relative neglect in the journal of both 20th Century philosophers and women:

Only nine articles have been published in total on the history of twentieth-century philosophy—one article each on Dewey, Russell, Russell and Quine, Collingwood, Heidegger, Adorno, Merleau-Ponty, Quine, and Sellars (father and son). That is only half of what has been published on Kant alone, and less also than on Aristotle alone. Aristotle and Kant are undoubtedly giants in the history of philosophy, but it is striking that their work should apparently be seen as historically more important than the entire philosophical thought of the twentieth century. I will only add here that there is also not a single article on any woman philosopher in the history of philosophy.

Professor Beaney also shares his thoughts on the narrowness of mainstream history of philosophy:

This is not the place to discuss the reasons for this bias both in the JHP and also, though now to a lesser degree, in the BJHP, but it is certainly something that needs to be addressed by the history of philosophy community as a matter of urgency. I will just say two things here. First, I do think that scholarship on the ‘top seven’ early modern philosophers, plus Plato and Aristotle, is now an extremely well-oiled machine. There are plenty of sophisticated philosophical treatments of their work, plus many rich contextual studies, so that a new scholar—if they are prepared to put in the effort—can readily stand on the shoulders of others in making their own contribution, even if it is only to add an epicycle to existing debate.

Second, while a scholar of one of those nine—or even sixteen—philosophers has as much a chance of gaining a permanent post in philosophy, or promotion, as anyone specializing, say, in contemporary epistemology,metaphysics, ethics, or philosophy of language, there is a widespread prejudice that someone working instead on medieval philosophy or neo-Kantianism, to take just two examples, are not in the same league.

We need to do much more to show how deeply mistaken this prejudice is, and we hope that the new and exciting work that is now being published in the BJHP will help do this, and in the process encourage further work on philosophers outside what is increasingly recognized as an absurdly narrow canon.

Thanks to Eric Schliesser (Amsterdam), whose post on the editorial at Digressions & Impressions brought it to my attention.

Note: Here is how Professor Beaney tabulated the numbers:

The articles might be divided into three main categories. The vast majority of articles have the work of one particular philosopher as their main focus, and the table that forms the appendix has therefore been ordered primarily by philosopher, chronologically by year of birth. A single such article has been taken as the unit, with discussions counting as half a unit…

In the second category, there are articles comparing two or more philosophers. Where two philosophers are discussed, ‘0.5’ has been recorded in the appropriate boxes (even if one philosopher receives more of the attention); where three philosophers are discussed, ‘0.33’; and so on. This is by no means an exact science, but is intended merely to indicate who is discussed, with some acknowledgement that the discussion is only partial.  …  A ‘1’ in a box is thus ambiguous: it could mean that one article was published on a certain philosopher in a given volume, or that two articles were published comparing that philosopher with another philosopher, or that three (or more) articles were published comparing that philosopher with other philosophers, or some further combination involving discussion notes. No attempt has been made to resolve the ambiguity in the table, since it can readily be resolved by consulting the relevant volume.

In the final category are articles that discuss general philosophical positions, traditions or themes, such as scepticism, British idealism or historiography. These have been tabulated in their approximate chronological order or at the end…

The analysis allows us to estimate what percentage of the total number of articles is devoted to the work of a particular philosopher. Where two or more philosophers are discussed in a single article, they do not always receive the same amount of attention, so it should be stressed that this is only an estimate. Even more importantly, the analysis does not take into account that the articles vary considerably in length, so caution must be exercised in interpreting the figures.

For the first nine years of the journal, BJHP did not accept papers “which are confined to consideration of aspect and issues in classical philosophy alone” and in volume 10.1 it was announced that “this self-imposed restriction is now lifted.”

“there is a widespread prejudice that someone working instead on medieval philosophy or neo-Kantianism, to take just two examples, are not in the same league.”

This comment took me by surprise. Is there really such a prejudice abroad? I can’s speak to neo-Kantianism, but in my experience, good scholars working in medieval are among the best historians of philosophy.Report

One striking fact about history of philosophy journals is that they pre-eminently center around figures. I visited the leading history journals and looked at their latest issues. By very briefly examining the titles of individual articles, this is what I found:

Obviously, I just quickly read the titles, so my conclusion must be cautious. But already from this you may see that history journals do not focus on topics/concepts/issues as much as systematic journals. This might be one thing to correct in the culture of doing history of philosophy: allow more scholarship that zeroes in on a philosophical problem rather than an exegesis on figures’ thoughts.

I think a splendid, historically sensitive book is Bardon’s A Brief History of the Philosophy of Time. It goes through major historical positions, but it is not purely exegetical, the philosophical (and scientific) content matters most.

*these seem to be topical rather than figure-basedReport

I couldn’t agree with this more!Report

Two comments:
1. Regarding the dearth of articles on history of 20th century philosophy: some of these figures have journals of their own (e.g., Husserl Studies), so scholars working on these figures or in these areas will probably prefer publishing there, as they hope (indeed, justified) to find a more receptive audience there. Scholars working in systematic areas emerging in the 20th century (esp. phenomenology) also see themselves more as systematic philosophers rather than historians.

2. The “big hitters” versus “lesser” movements (such as medieval philosophy and neo-Kantianism): it is hardly possible to write anything meaningful in these “lesser” areas without having a firm grasp on the big hitters who influenced them (in the case of neo-Kantianism, Kant; and so on), so I applaud Prof. Beany’s sentiment that this prejudice should be shelved. Since an awful ton of material has been written on the big names, it is increasingly hard to find anything new, and hence some of the scholarship on these tends to be a bit of scholasticism, whereas there is plenty of new material to be found in the work of the supposedly “lesser” philosophers.Report