Tomorrow, the U.S. Federal Communications Commission will vote on whether to undo the Open Internet Order, in place since 2015, that requires internet service providers to adhere to “net neutrality.” Take one minute today to try to help save it.

What is net neutrality? This description from Matt Stoller (in The Guardian) is pretty good:

Net neutrality is a rule against censorship and manipulation. It means that if you are a broadband provider, like AT&T, Verizon, or Google Fiber, you cannot discriminate in favor of or against any of your customers. You aren’t allowed to carry the content or data of one website or video provider at one price and the content or data of another website or video provider at a different price. You can’t censor, throttle, or slow the carrying of data for any but technical reasons.

The aim of net neutrality is to provide individuals and groups with a liberal (in the broad sense of free and equal) infrastructure for online activity.

Getting rid of net neutrality would mean that, in the absence of new regulations, internet service providers would be able to prioritize and speed up internet activity of their most lucrative customers, leaving those of lesser means, such as public schools, libraries, non-profits, small businesses, and the poor with slower or limited access to internet resources and communications tools.

You can voice opposition to rescinding net neutrality by going FCC’s express comment site, filling in your name, entering “17-108” in the “proceedings” box and writing something like “I strongly support net neutrality backed by Title 2 oversight of ISPs” in the comment box. It looks like this: 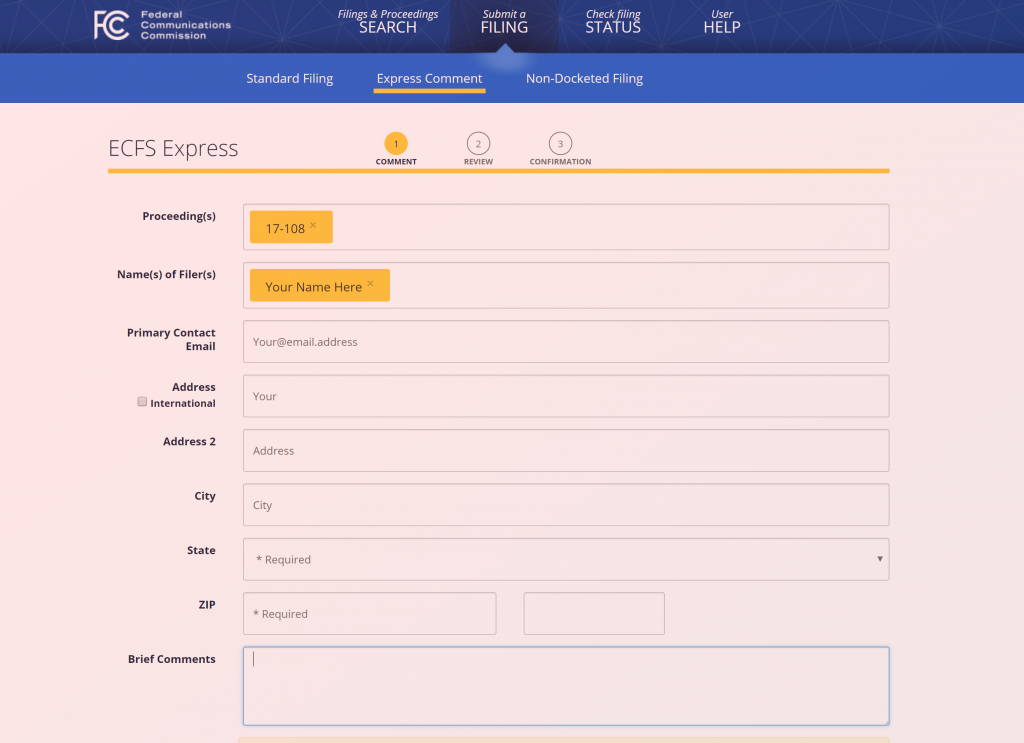 Why are some FCC commissioners in favor of ending net neutrality? There are some worries that they do not understand how the internet works. But to engage the policy question more substantively, here is a helpful discussion from the American Library Association:

Some of the carriers argue that net neutrality is an unnecessary regulation that will stifle competition and slow deployment of broadband technologies. But the truth is there is already only a little competition among broadband providers. In most parts of the U.S., there are at most two companies that provide a broadband pipe to your home: a telephone company and a cable company. Both of these industries are already regulated because they are natural monopolies: once a cable is laid to your house, there really is no rational, non-wasteful reason to lay another cable to your house, since you only need one at a time; therefore, most communities only allow one cable or telephone company to provide service to an area, and then regulate that company so to prevent abuse of the state-granted monopoly. Thus, we don’t allow phone companies to charge exorbitant amounts for local service; nor do we permit a cable company to avoid providing service to poor neighborhoods.

Contrast the quasi-monopoly on broadband pipes with the intensely competitive market of web content and services. There are millions of websites out there and countless hours of video and audio, all competing for your time and money.

With the advent of broadband connections, the telecom and cable companies have found a new way to exploit their state-granted monopoly: leverage it into a market advantage in Internet services and content. This would harm competition in the dynamic, innovative content and services industry without solving the lack of real competition in the broadband access market.

Clearly, the debate could continue and net neutrality may not be perfect (it may even be that the strongest case for net neutrality is that it ameliorates problems created elsewhere in telecom regulation), but time is limited—the vote is tomorrow—and utopia is not an option. So go say something.

There are worries that the commissioners of the FCC do not understand how the internet works.

Why don’t some get that regulation of companies that control access to something as important as the internet is a good thing?

With net neutrality gone companies can pick and choose which sites to slow down. And they may throttle any traffic that looks suspicious like suspected VPNs. Right now if I buy a game on steam, I can download it in under ten minutes in most cases. Now they probably won’t throttle me because I have choices in my area. But if they have no competition?

Plus you’ve got companies who want to stream 4k video someday. You really think Comcast will deal with that much traffic if they can charge someone for it? Either the streamer, or their customers

With all the people cutting out cable and many networks offering their own streaming options, cable providers will be desperate to make alternatives inconvenient unless they get a cut.

Plus right now it’s hard enough for anyone attempting an alternative to established services. Imagine what it will be like when Google Facebook, amazon, netflix, etc… can pay ISPs for a faster lane?

It’s not just Comcast AT&T & Verizon to worry about. No corp is your friend. Google and Amazon are already fighting over whose streaming device can access their content. Imagine suddenly Google Fiber starts having issues connecting to AZW? Or if they slow down Bing for the few who use it.Report

We need to fight this latest oppressive attempt to add yet another giant monopoly controlling billions of peoples’ actions by limiting their rights.

*The Internet must be a public utility.*Report

The level of misunderstanding around Net Neutrality is absurd:
-The whole “fast lanes” worry is an insidious-sounding way of describing the process whereby one pays their ISP more if they want more bandwidth. That’s not evil, that’s how it works: you use more bandwidth, you pay for more bandwidth.
-Fast lanes are a current reality. Over 30% of internet traffic goes to Netflix at peak times. What do you think the physical structure of the internet has to look like to make that a reality? How much do you think Netflix pays to Comcast for that much bandwidth?
-Net Neutrality is a remarkably successful PR campaign by major content providers like YouTube and Netflix to lower their cable bills.
-The proposed regulations do not eliminate all rules or regulations of the internet. It just changes things from a system where actions can be brought against ISPs only after some evidence of abuse, rather than the current environment where ISPs are tightly constrained on the theory that they will abuse customers otherwise.
-This is nothing more than a return to the system that had been in place up until 2015. Pre-2015 was not a wild west of customer abuse. It’s the regulatory environment that gave us the internet we know and love today.
-Evidence of customer abuse in the pre-2015 period is scant.
-And again, customer abuse is not made legal by the new set of regulations; it is only the difference between an innocent-until-proven-guilty model of regulatory control and a tightly confining regulatory model designed to stifle innovation on the theory that innovations COULD be bad for customers.
-We should not be stifling innovation in the area of internet access and structuring unless we sincerely believe that the internet as it exists today is basically fine.
-Given rapidly increasing demand for bandwidth in the US, it’s absurd to think that the internet architecture of today will be adequate a decade from now.
-Regulations do not make companies better actors. Regulated industries “capture” their regulators, and tilt regulations in a way that stifles competition. This has been demonstrated time and again (think occupational licensing requirements).
-If you worry about monopolies, forget Net Neutrality and start talking about anti-trust actions. Those laws are still on the books!

This Twitter thread includes a nice explanation of why we shouldn’t be reassured by the argument that this is simply a reversion to pre-2015 standards, among other things.
Regardless of one’s general views on the subject of whether “capitalism is the most efficient method that we have for providing wanted goods and services to people,” ISPs are… ah, you know, I was going to say some stuff about duopolies and the need for regulating them, but you’ve already gone to the simple regulatory capture argument as if Ajit Pai’s FCC isn’t itself an example of regulatory capture, and as if the “All regulations are bad!” principle that you’re relying on here has been “demonstrated time and again” anywhere outside the fever dreams of the Mercatus Center.
I do wonder, though–you seem to think that net neutrality didn’t exist before 2015, and that it’s net neutrality that would prevent us from getting an adequate internet architecture for the future. Then why is the US’s current internet architecture so awful, as it has been since long before 2015? Did countries with better internet service get there by abandoning all regulation?Report