PhilArchive is the revamped and renamed version of the archive service that had previously existed at PhilPapers.

David Bourget and David Chalmers, the co-directors of PhilPapers, announced the change yesterday:

We’re pleased to announce the launch of a new site from the PhilPapers Foundation: PhilArchive.

As its name indicates, PhilArchive is an open access e-print archive for philosophical works. PhilArchive is a relaunch and rebranding of the archive service that has been present within PhilPapers since 2009. The archive service has been widely used, but we have found that some philosophers are unaware of it because of its location within PhilPapers. We anticipate that the new PhilArchive website will significantly increase awareness and use of the service. It will also help to logically separate PhilPapers open access content (which is completely free to all) from its indexing service (for which we ask universities to pay a fee).

At launch, PhilArchive includes the 27,000 works already in the PhilPapers archive, making it by far the largest open access archive in philosophy. PhilPapers and PhilArchive will remain tightly integrated, with all archived papers on one service automatically appearing on the other service. PhilArchive also introduces some important new features, including the ability to make different versions of a paper accessible for citation.

We strongly encourage all philosophers to archive their papers on PhilArchive as a matter of course. Papers submitted to PhilArchive are not peer reviewed, although to prevent abuse they are subject to vetting for minimal standards of quality and relevance. Most journal publishers allow archival at least of a preprint version; you can find information on a specific journal’s policy on this page.

We also encourage all users to regularly monitor PhilArchive for new papers. You can set up regular email alerts and also search by fine-grained topics. We hope that the site will help make archival a standard practice in philosophy, as it already is in the physical sciences and some other areas. 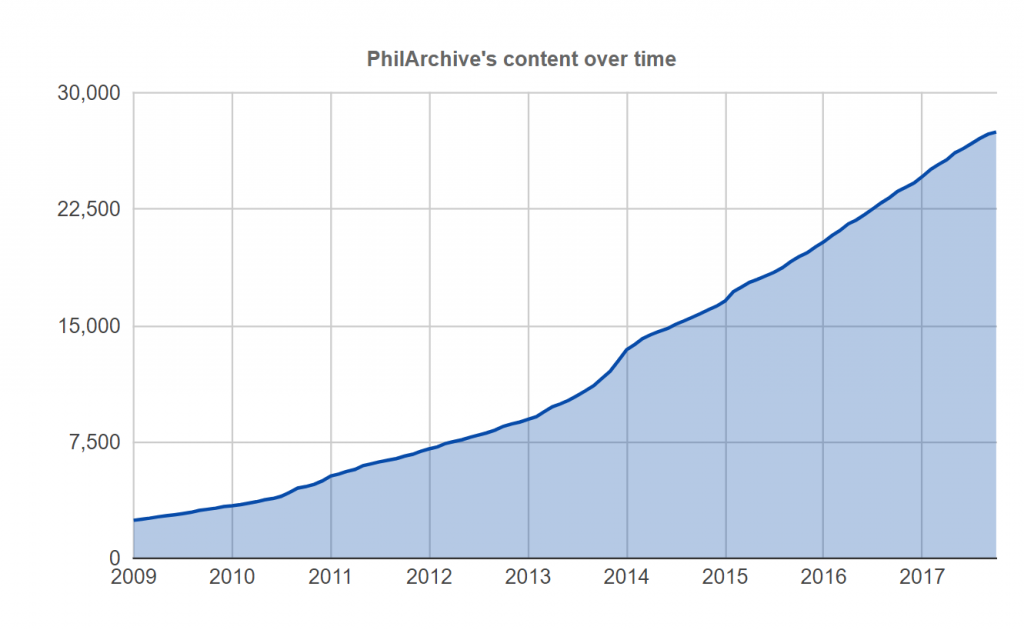 This is great. Thank you, David and David. My private hope — now hereby public — is that a professional norm quickly and naturally emerges whereby we all both archive and monitor new archives in our respective areas. Norm or not, thank you again for your service.Report

This must be a dumb question because no one is asking it. But how is this different from philpapers?Report

philpapers is primarily a bibliographic index (indexing papers mainly available elsewhere), with about 2.3 million entries. philarchive is an open access archive (of papers that people upload to the archive) with about 27,000 entries. the archive service was previously available within philpapers (without a front end of its own), but we’ve now separated it into a new site for the reasons given above.Report

Does “all philosophers” include philosophers of science, given philsci-archive? (Serious question: it’s not obvious to me what the most sensible policy is here.)Report

yes. of course philosophy of science is distinctive in having a widely used existing archive for the subfield, and we’re certainly not trying to undercut it. i’d encourage philosophers of science to upload their papers to both places, as many have already done. there’s an upside (more philosophers will see your work) and not much of a downside.Report

I suggest adding a question to your FAQ or elsewhere where you clarify the sense in which this service is an “archive”. As in, what arrangement’s you’ve made so that the submitted papers (or files, or bits) will persist in the long term.Report

Authors should be wary of relying on the list of journal policies. For example AJP is listed as allowing pre-print and post-print copies to be archived, but my most recent (June 2017) acceptance email from AJP specifically precluded posting either pre-print or post-print on PhilPapers or Academia.edu (both mentioned explicitly by name) even after the 18 month general embargo on posting post-prints.

A reason, no doubt, not to continue to submit to the AJP — a shame because they give excellent feedback even when rejecting things.Report

Skef: as a standard-compliant OAI-PMH archive, PhilArchive is harvestable by OAI aggregators such as CORE Portal (https://core.ac.uk/), who will keep their own copies of the papers. This provides considerable safety for the data in the unlikely event that PhilArchive/Papers were to disappear. I don’t know if we’ve been harvested yet (we just launched), but it shouldn’t be long before our archive’s content spreads around the world. Obviously, we’re also doing everything we can to ensure that PhilArchive/Papers has a long-term future!

Nicole: thanks for pointing this out. We’ve updated the list to reflect those exceptions on the part of AJP. In general, we can’t know about such exceptions until they’re pointed out to us, so we’ve added a warning on the page to always check the details. If anyone else knows of “no-PhilPapers” exceptions at other journals, please let us know!Report

PhilMath on New Publishing Arrangements for "Thought: A Journal of Philosophy"

Just when you thought the PDC can't get worse ... (compare this to the recent Philosophy of Physics journal which just seems the right way