Secret features or qualities, hidden messages, subtle references, often humorous—what’s come to be known as “Easter Eggs”—appear in various media, from video games, to movies to Apple’s Siri, to even some recent high profile resignation letters. What about in academic philosophy writings?

In your readings have you come across any secret, sly, subtle, or stuck-in-a-footnote messages worth bringing to wider attention?

I have an example in mind. I’ll post it after the weekend, but if someone mentions it in a comment before then they’ll win a $20 Amazon gift card. (See Update, below.)

(Prompt for this query: an old post at Academia Obscura.)

UPDATE: In his “Puppies, Pigs, and People: Eating Meat and Marginal Cases,” Alastair Norcross invents “cocoamone,” a “hormone responsible for the experience of chocolate,” a version of which can be made by torturing puppies. He makes use of it in a few thought experiments, and at one point mentions that cocoamone production is Alabama’s leading industry. Here is that passage in the version available online at Philosophical Perspectives:

But that is a censored version of that passage. The original version, which had been widely circulated in a draft (and perhaps even available in some official published form) had an extra line, and a footnote. And it’s that footnote I had in mind as an example of an Easter Egg: 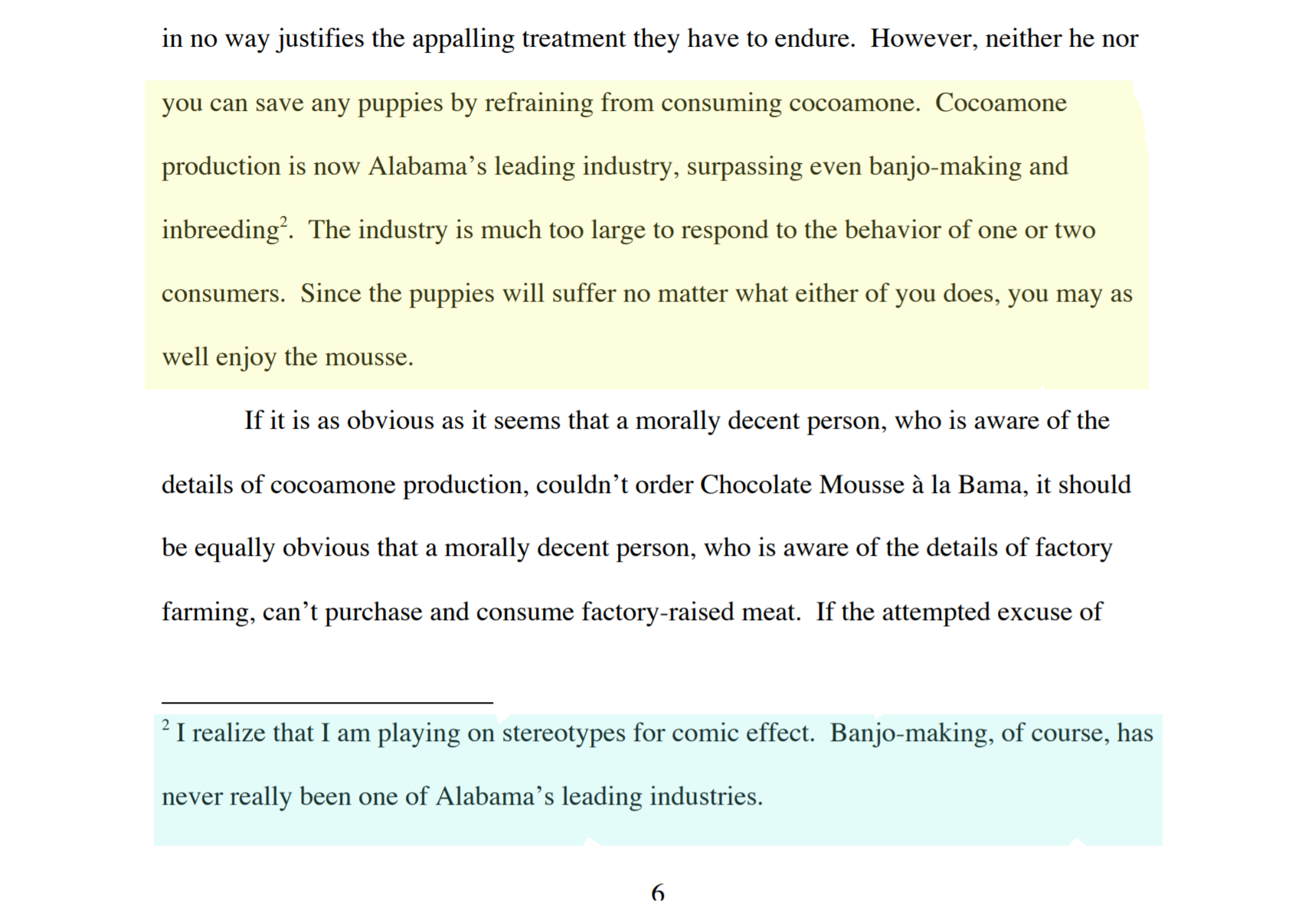 Not sure if it qualifies, but on p. 233 of *Weighing Goods* (as sober a philosophy book as ever there was) John Broome cites dietary advice given by P.G. Wodehouse’s character Reginald Jeeves. (This was an especially fun discovery for me, as I once consumed nothing but Wodehouse and Broome in an effort to learn from two masters of English prose.)Report

Not exactly hidden, but Michael Rosen gently makes fun of Harvard-centrism in a footnote in his On Voluntary Servitude. (This was many years before he was hired by Harvard.)Report

Not exactly hidden or subtle, but certainly my favorite footnote:

> [I]f my background epistemology is right,\footnote{It is.} then [something].

I’ve always been fond of Joel Feinberg’s running feud, conducted in his footnotes and acknowledgements, with Josiah Carberry.Report

I don’t have the book with me at the moment, but I distinctly remember the first philosophical Easter Egg I discovered, as a senior undergrad: Chalmers’ The Conscious Mind has an endnote which contains a recipe for black-eyed pea salad.Report

Peter Singer included a red lentil dal recipe in one of his works, maybe Animal Liberation?Report

Another gem from Lycan, from his contribution to Consciousness: new philosophical perspectives, Smith and Jokic, eds, p. 392.

“Suppose you are in the forest at night and, very close by, a tree falls and crushes your Porsche.\footnote{Yes, I know that in real life you do not have a Porsche, or you would not be reading this article. Or, if you do actually own a Porsche, would you be willing to send me a cheque for $1,000?}”Report

Still love Frankfurt’s first footnote in the alternative possibilities paper: “To discuss the principle without analyzing either of these concepts may well seem like an attempt at piracy. The reader should take notice that my Jolly Roger is now unfurled.”Report

Of course *your* favorite is about pirates!Report

If this is about jokes, then I consider Hobbes’s argument for the rough mental equality of human beings in chapter 13 of Leviathan to be one (note: I’m not saying it’s a bad argument; I’m saying Hobbes intended it as a joke): “It’s just a fact about human nature that however much a man may acknowledge many others to be more •witty, or more •eloquent, or more •learned than he is, he won’t easily believe that many men are as •wise as he is; for he sees his own wisdom close up, and other men’s at a distance. This, however, shows the equality of men rather than their inequality. For ordinarily there is no greater sign that something is equally distributed than that every man is contented with his share!”Report

This is stolen from Descartes’ opening remark about good sense in the -Discourse- (or perhaps from an even earlier source?)Report

“To illustrate, suppose that Jasmine, a free agent, lives in a deterministic world, and in that world at a certain time, say April 20, 1984 at precisely 4:20 p.m., she does exactly what she wants in purchasing the Bob Marley album, Exodus.” Michael McKenna and Derk Pereboom, Free Will: a Contemporary Introduction, p. 59.Report

In first edition of Paul Feyerabend’s Against Method, page reference for entry “rhetoric” is passim.Report

There’s a great endnote in Jonathan Dancy’s Moral Reasons, after he gives some extremely simple case (“Suppose I eat an ice cream cone because I enjoy ice cream”). First he has to acknowledge that he got the case from someone else, the he says, “I am not good at thinking of examples.”

Also there are a couple of lovely things in On What Matters. If remember correctly, in the bibliography of V1&2, Joseph Raz is listed as “Raz, Joseph, whose views I should have discussed.” And there’s a beautiful endnote in V2 (p. 769) quoting at length from a correspondence between Sidgwick and (of all people) Tennyson’s son, whose father had just died. Sidgwick himself quotes from “In Memoriam A.H.H.” and says “These lines I can never read without tears,” then Parfit concludes with, “These lines I can seldom read without being close to tears.” A real meta-tearjerker.Report

David Lewis’s work is chock-full of references, both subtle and obvious, to Gilbert & Sullivan operettas. “Elusive Knowledge” has a “What Never? Well, Hardly Ever”. “Truth in Fiction” considers exactly how many many sisters, cousins, and aunts Sir Joseph Porter (KCB) has. In “Attitudes De Dicto and De Se”, Go-To has different opinions about the Lord High Auditor and the Paymaster-General, unaware that they are one and the same nobleman.

Not an Easter egg, exactly, but I put my dad’s first name in a moral case in one of my publications. He would have been amused by this. I’ve got my mom’s name in another paper, but it hasn’t been published yet.Report

Your dad’s first name is Smith?Report

Ha! No, the other one, Jones.Report

In Adam Swift and Harry Brighouse’s book Family Values (and, I think, in an earlier paper of theirs) they, as is standard, acknowledge lots of people who helped them. They then say: ‘With all that help, there shouldn’t be any, but all remaining errors are Brighouse’s.Report

In his discussion of laughter in the Critique of Judgment, Kant tells three jokes (from p. 333 of the Akademie edition and pp. 203-4 of Werner Pluhar’s translation):

“An Indian at an Englishman’s table in Surat saw a bottle of ale being opened, and all the beer turned to froth, rushing out. The Indian, by repeated exclamations, showed his great amazement.–Well, what’s so amazing in that? asked the Englishman.–Oh, but I’m not amazed at its coming out, replied the Indian, but at how you managed to get it all in.”

“[T]he heir of a rich relative wants to arrange for him a very solemn funeral service, but complains that things are not quite working out: For (he says), the more money I give my mourners to look grieved, the more cheerful they look.”

“Suppose…some rogue gives us a longwinded account of the grief of some merchant who, during his return trip from India to Europe, with all his fortune in merchandise, was forced by a heavy storm to throw everything overboard, and whose grief was such that it made his /wig/ turn grey that very night.”

Well, I didn’t say they were especially *good* jokes.

Not really an Easter egg, I guess, since it’s how the essay begins, but I can’t resist sharing the joke Anthony Kenny repeats in “Anselm on the Conceivability of God”:

The first letter in each sentence of Two Dogmas spells out a recipe for pecan pie.Report

In Amharic, of course (in case people don’t spot it at first).Report

I don’t have the details, but I remember hearing about a logic book whose index entry for ‘self-reference’ includes its own page number.Report

I put an Easter egg in my thesis.Report

In the index of Shelly Kagan’s Normative Ethics, there’s an entry for ‘Mumbo-Jumbo’ which refers to his consideration of an objection to Rule-Consequentialism.Report

I was just teaching symbolizations in predicate logic using The Logic Book and came across a set of questions asking students to symbolize sentences like “All the jellybeans are red” and “None of the jellybeans are black”. The Universe of Discourse was specified as “The jellybeans on Ronny’s desk.” I’ve taught this chapter for years, but only today recognized the reference to Ronald Reagan and his penchant for Jelly-Bellys. I had to inform my students of this bit of historical trivia so they could get the joke. They weren’t terribly amused.Report

I’ve put my example in an update to the original post, above.Report

If AN’s banjo-making and inbreeding is a “Deliverance” reference, that film was set in NW Georgia, not in the great state of Alabama.Report