Scientists have taken DNA samples of philosopher Jeremy Bentham, who died in 1832, to determine whether he had Asperger Syndrome or some other form of autism, according to The Telegraph.

The sampling is made somewhat easier by the fact that Bentham had arranged for his body to be preserved after his death as an “auto-icon” that could be displayed at gatherings of his friends, should they miss him.

[Bentham] was notably eccentric, reclusive and difficult to get hold of. He called his walking stick Dapple, his teapot Dickey, and kept an elderly cat named The Reverend Sir John Langbourne.

In 2006, researchers Philip Lucas and Anne Sheeran suggested his unique character was driven by Asperger’s syndrome, after studying biographies which described a young Bentham as ‘having  few companions his own age’; and being  ‘morbidly sensitive.’

Now scientist hope to test the theory with science. Recent studies have suggested that autism is around 82 per cent heritable and there are specific regions in the genetic code linked to traits.

The research coincides with a rare public showing of Bentham’s head, which is usually “deemed too distasteful to show, and is now kept in safe where it is removed just once a year to check that skin and hair are not falling off.” There’s a photo of it below, but if you care to see it, you can check out the “What Does It Mean To Be Human? Curating Heads” exhibit at University College London, which is running through February 28th, 2018.

See also, “I Hung Out With Bentham’s Severed Head And This Is What I Learned.”

photo of Bentham’s preserved head below

it is kind of creepy 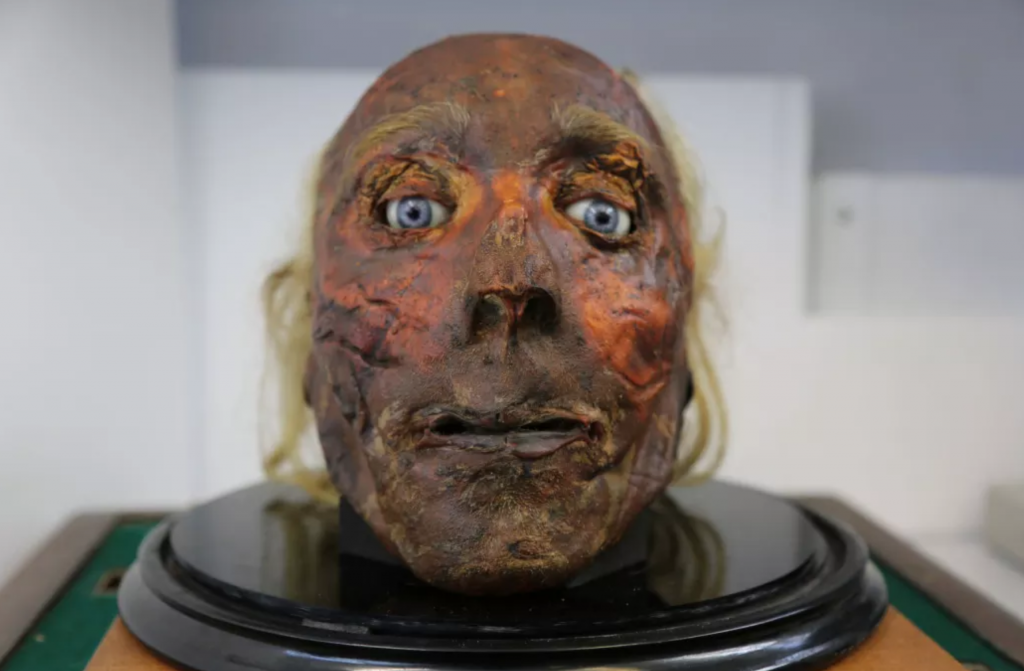 I’m not a geneticist, but this headline/description seems highly misleading. There is no genetic diagnosis of Autism. Twin studies suggest high heritability, but this is a far cry from actually identifying genes that cause autism. It’s certainly not Mendelian like Huntington’s, where you can indeed do a genetic diagnosis. Research on causal genetic links is ongoing and may yield predictability down the road, but this research only makes sense when looking at individuals confirmed to have Autism compared with controls who do not, rather than entirely speculative cases as with Bentham. And even then, we will only ever get predictability – it will never be a genetic test for autism per se, only a test for predisposition or increased susceptibility.Report

I hope you will forgive me for writing this anonymously because of personal details included. The idea that Bentham’s remains are going to be tested in order to determine whether or not he might have autism or Asperger’s is scientifically suspect, given the current state of evidence – and thanks to Owen Schaefer for pointing this out. Perhaps the gloss of the news stories are giving an inaccurate impression, but the project seems motivated by an off-putting idea of what signs or behaviors should raise the question in the first place. Eccentricities like naming one’s possessions or giving particularly good names to pets are evidence of a developmental disorder? I’m afraid this only reminds me of school experiences we occasionally had with our children, where eccentric behaviors like being lost in deep thought or having a rather creative imagination were taken to be signs of something “medically” concerning that required further diagnosis. Introverts and unusual thinkers sometimes find themselves with few age-similar companions while growing up. I dislike the idea of pathologizing behaviors that already lead frequently enough to social ostracism or difficulty being understood by adults who really should know better.Report

As a young philosopher on the autistic spectrum I feel somewhat uncomfortable about this. Having already seen a psychologist, Jonathan Haidt I think, using Bentham’s alleged (but I think plausible) ASD to explain his allegedly broken moral judgment I worry that the implicit message of this will end up being now we see that Bentham was one of those defective human beings without warm fuzzy emotions we can explain why he was such a weirdo and took this pathological moral view. Bentham is a particularly to depict as emotionally defective after all.

Of course autistics have genuine cognitive weaknesses relative to the human norm and I suppose that there’s nothing illegitimate or bigoted in principle about citing them to explain weaknesses in the work of an autistic philosopher. But let’s remember we also have cognitive strengths. Bentham after all, whilst sometimes hideously psychologicallying naive and with a cramped view of the human good also got very many important issues in applied ethics basically right way before most other people. He was early on animal rights, early on gay rights, early in general on ‘let’s not subject people to brutal punishment for the state for doing things that don’t hurt anyone’, opposed to slavery (though not as strongly as he should have been and that’s a less unusual position for the time). Let’s remember he said all this while Kant was writing about the alleged moral horrors of masturbation. It’s not implausible that all this might have some connection to autistic traits like an attractions to a certain kind of rationalism and a willingness to disregard social conventions and taboos.Report