Samir Chopra, a professor of philosophy at Brooklyn College and City University of New York (CUNY), is among faculty and students being slandered as “terrorist supporters” by the David Horowitz Freedom Center, a rightwing, anti-Muslim organization.

The names appear on posters put up around the Brooklyn College campus. Illustrations of Chopra and his colleague, political theorist Corey Robin, also appear on the posters.

The following poster was affixed to a recycling bin (I’ve blurred the names of those not mentioned in this article): 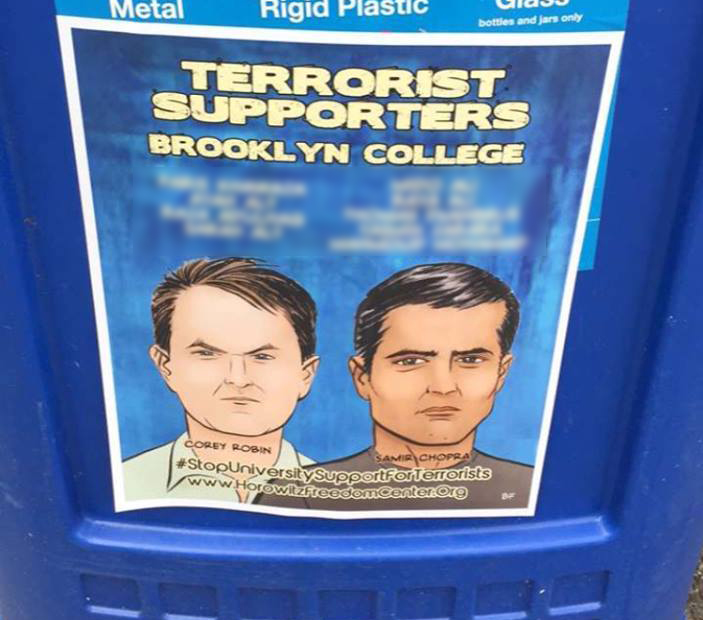 Similar posters have appeared on other campuses. Last week the following poster was put up on the UC Berkeley campus (again, names have been blurred): 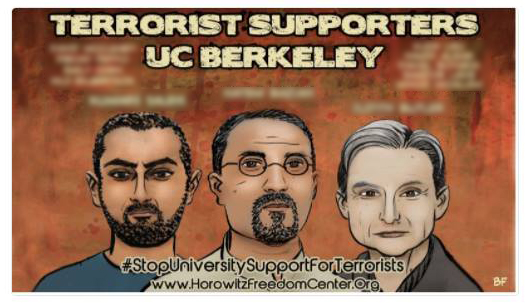 The posters at Berkeley were removed by university facilities services, according to The Daily Californian. In the past, Horowitz has claimed responsibility for similar posters.

Chopra, who also appears on the watch-list of another anti-Muslim group, Canary Watch,  has pointed to a post at his blog for part of the explanation for why he has been targeted by Horowitz. In it, he recounts his testimony at a university hearing on behalf of students threatened with disciplinary action for protesting Zionism on campus.

Of the posters, Chopra says: “this is a clumsy and blatant attempt to intimidate and cow me, and it won’t work.”

(Note: shortly after being published, this post was updated to mention that students’ names were among those on the posters. According to its website, the David Horowitz Freedom Center “protects students from indoctrination and intimidation.” The David Horowitz Freedom Center also papers students’ campuses with posters naming them and calling them “terrorist supporters.” Huh.)

At the risk of sounding like Brian Leiter, this does seem like defamation per se, because there is an accusation of criminal behaviour. (I am not an attorney so my understand may well be faulty). Of course it occurs to me that a high profile lawsuit may be exactly what this group is looking for. Does anyone know if Prof Chopra or others are planning a legal response?Report

Daniel Kaufman
Reply to  Will Behun

It’s defamation to accuse someone of supporting something? The allegation is not of financial support, which would be criminal. But moral support? That’s not criminal and it’s not defamation to allege itReport

Imm no lawyer, but I do know that defamation includes false statements that impugn someone’s moral character. So, yes, statements about a person’s morals are available candidates for defamation.Report

Whether or not another person supports something is a matter of opinion. I don’t see how that can be defamation.

It’s a narrow point. The whole thing is appalling and outrageous, but I doubt its defamation.Report

Will Behun
Reply to  Daniel Kaufman

It’s likely that Horowitz et al mean “moral support” or “ideological support” or something along those lines. But if we are asking if the poster is defamatory, what’s most relevant is what is said, not what is intended.Report

David Horowitz is such a fool that I’d think it would be a lot worse to not be targeted by his “freedom center”. The only worry would be if knuckle-draggers and villains encouraged by him started to harass or actually hurt those targeted.Report

Solidarity with Samir and Corey and other colleagues and students on the receiving end of this. I would hope that the Brooklyn College and CUNY administrations could find their way to condemnation of this, but I’m not holding my breath.Report

Beyond the actual doing of it, what bothers me the most is the “Wanted” poster style of the two flyers. It carries a veiled threat with it. Really ugly stuff.Report