The destruction recently wrought by Hurricane Harvey will take years to recover from. Now, weather forecasters are drawing attention to Hurricane Irma, currently in the Atlantic Ocean and heading west towards the islands of the Caribbean, Puerto Rico, Haiti and the Dominican Republic, and then possibly Cuba, Florida, and elsewhere along the eastern United States. 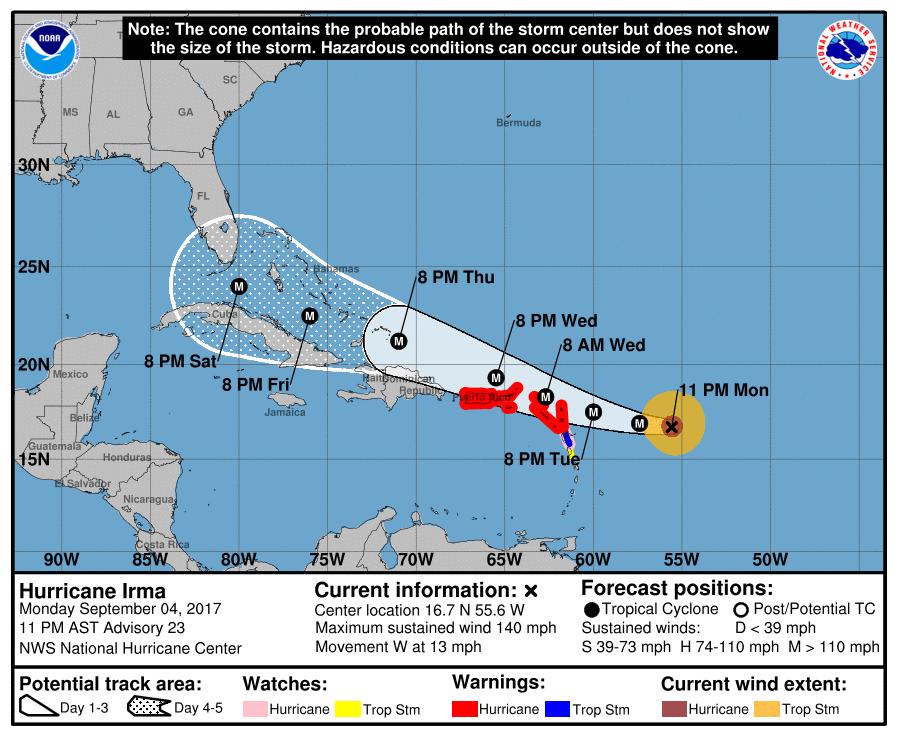 Image from the National Hurricane Center

Much is at stake in properly preparing for hurricanes, and such preparation depends in part on the forecasting. Yet it is far from obvious how meteorologists and other scientists should forecast.

As Joe Roussos, a philosophy PhD student at the London School of Economics (LSE) notes, “the science of predicting hurricanes is crucial for disaster management and insurance, but also raises difficult methodological and philosophical questions.”

In a post at the LSE Philosophy, Logic, & Scientific Method Blog, Roussos says that hurricane science raises questions in “the philosophy of scientific models, the decision theory of severe uncertainty and the social epistemology of policy making in the face of disagreement.”

Here is an excerpt from a part of the post about the data used for modeling and predicting hurricanes:

First, there is a debate about which data should be included: just direct reports of landfall, or also more recently available data on storm formation in the Atlantic basin. The basin data tells us more about the physics of storm formation, and about potential hurricane tracks, but covers a shorter time period. Landfall data tracks the impact we care about directly, and has a longer history.

Second, there is a debate about the drivers of hurricane formation. Tropical storms use heat energy from the ocean surface to develop into hurricanes (basically, warmer sea water leads to more evaporation), meaning that sea-surface temperature is one of the major contributors to the generation of tropical storms. Modelers of North Atlantic hurricanes disagree on whether to focus their models on temperatures in the central Atlantic basin, or to include the influence of Indo-Pacific sea-surface temperatures.

A third debate is whether a flip has recently occurred in the long-term oscillation of sea-surface temperatures. These temperatures appear to oscillate naturally, and the multi-decade oscillation in the Atlantic is one of the most important inputs to modelling North Atlantic hurricanes over multiple years. The NOAA explain the impact: “during warm phases of the [Atlantic multi-decadal oscillation], the numbers of tropical storms that mature into severe hurricanes is much greater than during cool phases, at least twice as many.” So, this debate is about whether we should expect far fewer hurricanes in the near future.

These and other debates mean that, if one were to model each of the major views, on each debate in the literature, one would end up with about 20 different models of hurricane formation and landfall along the North American Atlantic coastline. What should policymakers do in the face of such disagreement?

Suppose we collect all 20 models described above. Each will likely generate different landfall rates (for a given category of hurricane) for any single gate. How should we choose which one to follow? These different rates would lead to different insurance premiums, different resource trade-offs when investing in flood defences, and so forth…

The whole post, which can be found here, is fascinating and timely, and worth sharing with students and others interested in learning about the “real world” relevance of philosophy.

Here is an article listing various organizations helping those affected by Hurricane Harvey which you can support.

Fascinating reading. Thanks for the link, Justin.

These two recent guest pieces at _Digressions and Impressions_ on the man-made factors of Harvey (and by extension other hurricanes) are well worth reading as well.

Just after Katrina in 2005 I wrote this piece on natural, political, and psychological aspects of the storm’s impact on New Orleans (it appears later as a chapter in _Political Affect_): http://www.protevi.com/john/Katrina_1_Nov_05.pdfReport