The Humanities Indicators project of the American Academy of Arts and Sciences has released new data regarding graduate degree completion in the humanities, number of jobs advertised per discipline, and the demographics of humanities graduate students. 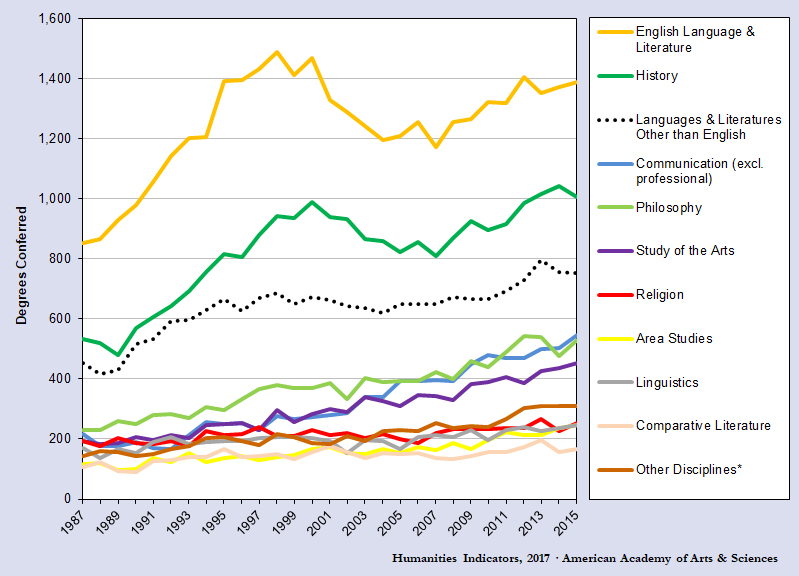 Number of Doctoral Degree Completions in the Humanities, by Discipline, 1987–2015 (via Humanities Indicators)

Of the humanities disciplines surveyed, four tend to grant a greater number of doctoral degrees per year than philosophy: English, history, non-English languages, and communication. 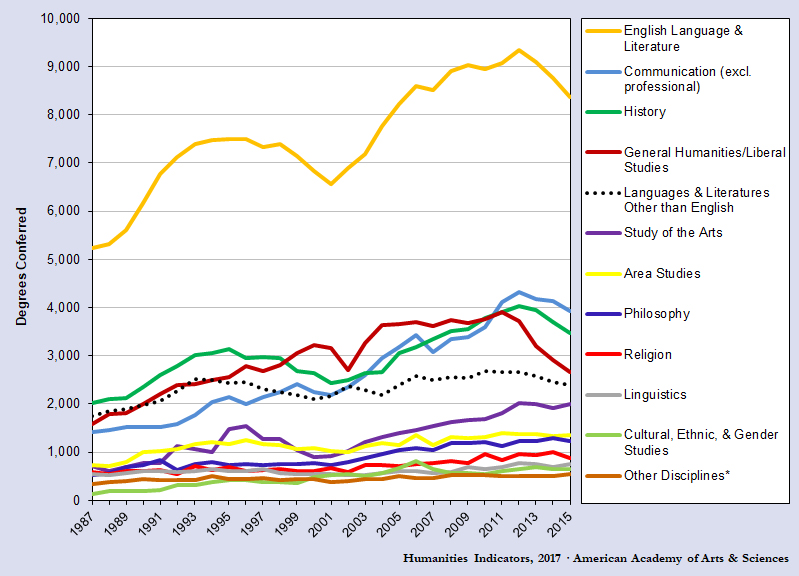 Number of Master’s Degree Completions in the Humanities, by Discipline, 1987–2015 (via Humanities Indicators)

Regarding racial and ethnic diversity in the humanities, philosophy awards more PhDs to members of traditionally underrepresented racial and ethnic groups than English, Arts, Classics, and Linguistics, though the percentage is still quite low. 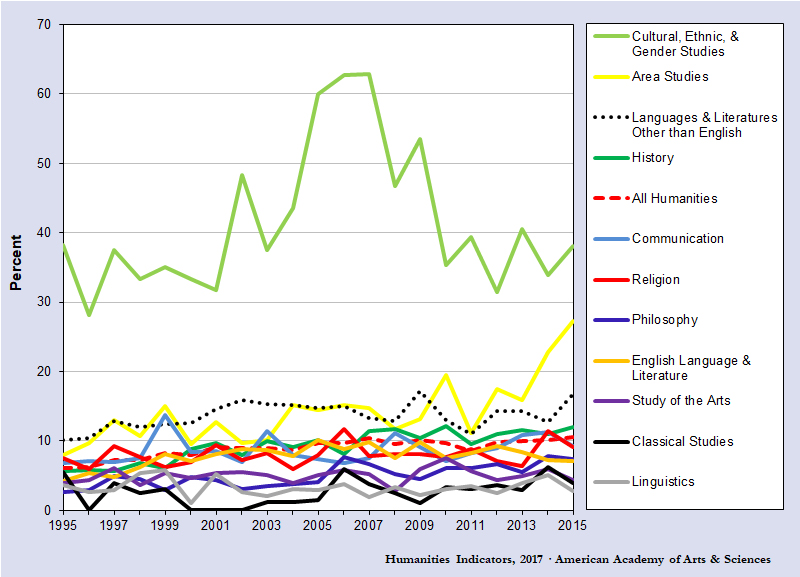 When it comes to master’s degrees, philosophy does comparatively worse, though it does stay with the general humanities trend of increasing the racial and ethnic diversity of master’s students. 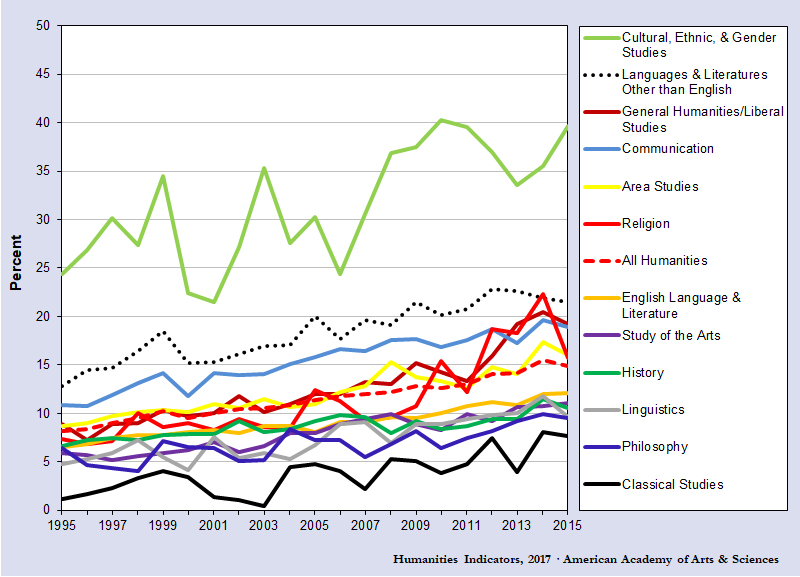 More information about racial and ethnic diversity in graduate humanities degrees can be found here.

Philosophy continues to show comparatively poorly when it comes to gender, being the humanities discipline with the fewest women earning degrees. 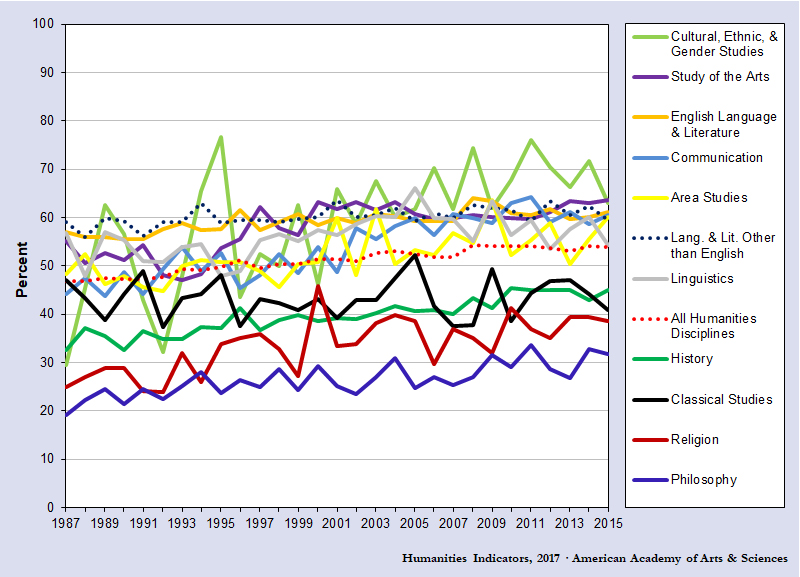 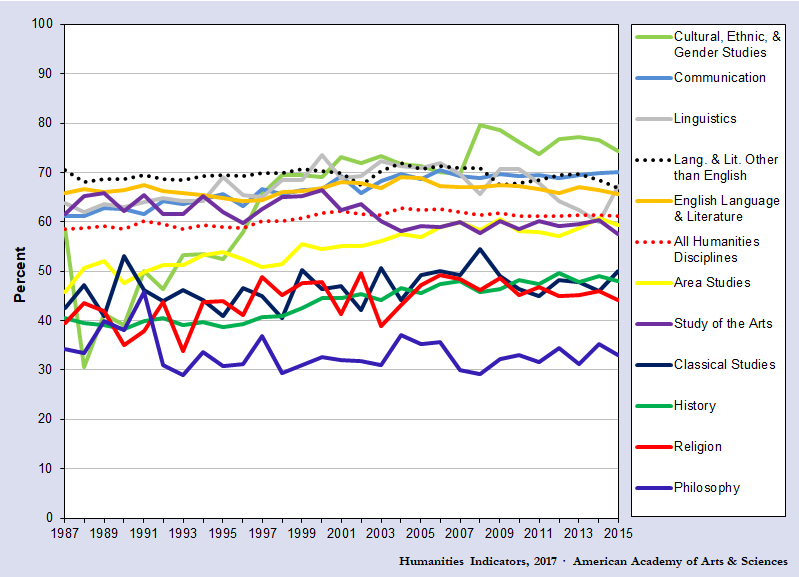 More information on gender distribution of degrees in the humanities is here.

The number of advertised jobs in philosophy (on PhilJobs, with which the American Philosophical Association has partnered for this purpose) for the 2015-16 job hunting season decreased very slightly (by 1%, according to Robert B. Townsend, Director of the Washington Office of the American Academy of Arts and Sciences). In regards to trend, philosophy seems to be doing a little better than most other humanities disciplines lately, with the exception of classics. 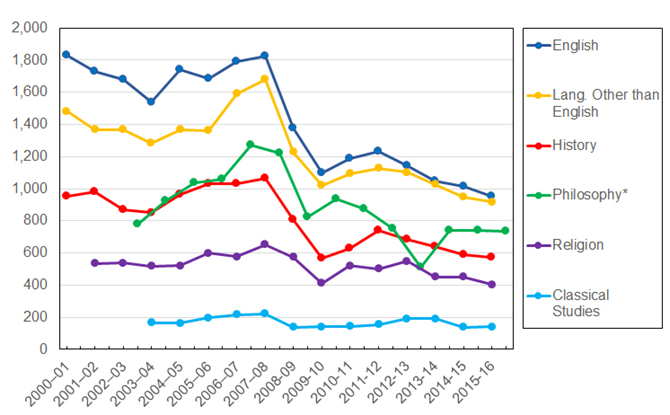 Number of Advertised Job Openings through Disciplinary Society,
2000–01 to 2015–16 (via Humanities Indicators)

Thanks to Robert B. Townsend for sharing this data. See the Humanities Indicators site for more information.

The race/ethnicity numbers are *slightly* misleading.

For one thing, they don’t have data on 10% or so of the students, so the error bars should be substantial.

More importantly, the ratio reported has as numerator Americans from under-represented groups, and as denominator, all students. So programs or fields that recruit more foreigners will do much worse by this measure. Indeed, there is no difference on this measure between recruiting a white American and recruiting a foreigner.

What would be more useful, I think, is seeing the ratio of Americans from under-represented groups to American students. I don’t think that measure would make philosophy look particularly good, but it would be more revealing.Report

Slight Increase in Philosophy PhDs Awarded *in the United StatesReport