All 17 of the non-governmental members of the President’s Committee on the Arts and Humanities (PCAH) today submitted a group resignation letter (posted below), effectively disbanding the committee.

The PCAH is comprised of government members (the heads of 12 federal agencies with culture programs) who serve “ex officio” and appointed non-governmental or “private” members.

In their resignation letter to President Trump, following his equivocation between the Nazi and white supremacist marchers and those protesting them in Charlottesville, Virginia, last weekend, and his apparent defense of some white supremacists, the private members wrote, “Ignoring your hateful rhetoric would have made us complicit in your words and actions.”

The Committee, which advises the White House on cultural issues, takes as its mission “using the power of the arts and humanities to contribute to the vibrancy of our society, the education of our children, the creativity of our citizens, and the strength of our democracy.” It was created by Ronald Reagan in 1982. 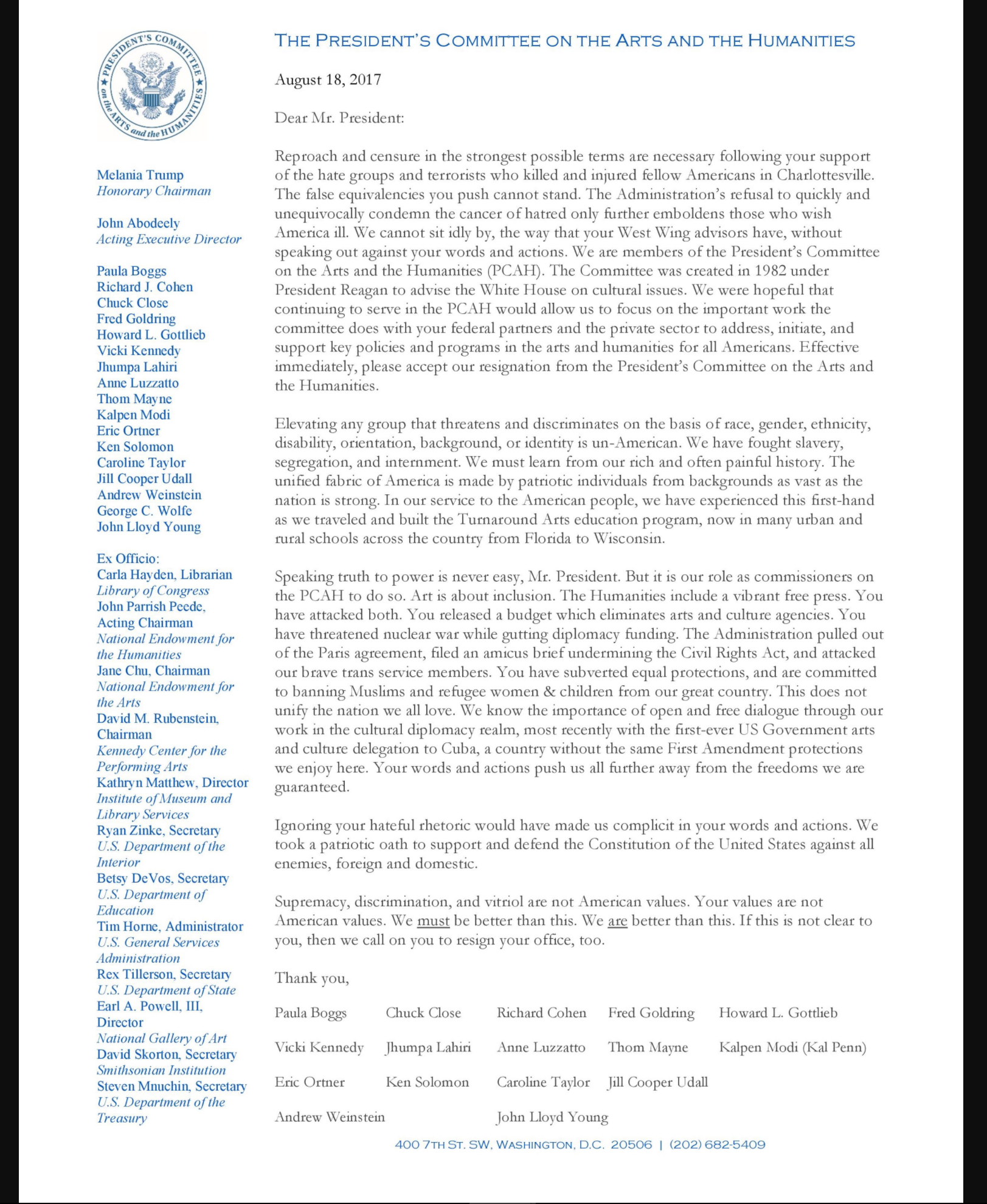 (Note: the 17th member of the committee, George C. Wolfe, added his name to the letter after it was released.)

Sadly, I think that virtually all of Trump’s support base will find strength in this. Their narrative is that academics, particularly in humanities departments, are part of the problem. Though I’d love to be corrected here, I can’t see how their resignation hurts the president in any way, and the notion that they would have been “complicit” in his actions is a little silly (no-one thinks that the PCAH has anything whatsoever to do with what DJT decides to do and say, or that his actions reflect their perspectives).Report

There is no hope. The country and population are on a down slope that is scary. That such a person with his immoral lifestyle and racist, sexist history can be elected president, tells me we are beyond hope. How did we go from Obama to Trump??? I can only attribute it to a backlash amongst whites who are feeling that “those people” have stolen their income, etc…rather than admitting they, themselves, have failed. It must others who did me in, it can’t be me.Report

“his apparent defense of some white supremacists”

Fake news. There is nothing Trump said that can reasonably be construed as an “apparent” defense of white supremacists. Some pretend to see an *implicit defense* from the fact that he also condemned violent members of antifa (“alt-left”), but that’s just the usual “no enemies to the left” ideological nonsense that decent people must endure.Report

How about the comment that there are good people on both sides?? Are there good KKK members??? Thus, maybe there were really good SS officers?? Good skinheads???Report