Timothy Hall, associate professor of philosophy at Oberlin College, unexpectedly died this past Sunday at the age of 48.

Dr. Katherine Thomson-Jones, chair of the Department of Philosophy at Oberlin, writes:

It is with great sadness that I share news of the unexpected death of Timothy Hall. Tim joined the Oberlin Philosophy Department in 2001 and received tenure in 2007. He has taught a wide range of courses in normative ethics, applied ethics, and political and legal philosophy. His research focused on the relation between self-ownership and property rights—see his important article, ‘Doing Harm, Allowing Harm, and Denying Resources’ reprinted in the 2011 anthology, Ethics and Moral Philosophy (ed. Thom Brooks, Leiden). Recently Tim gave a lively and well-attended talk at Utica College on gun rights. Tim will be remembered for his dynamic teaching, his sharp wit, and his great passion for philosophy.

In an article about Professor Hall’s death, Oberlin’s Dean of Arts and Sciences, Tim Elgren, is quoted as saying:

He will be remembered by his students and colleagues as one who was deeply committed to the importance of exploring diverse perspectives on society’s most challenging issues, a core value of the liberal arts. 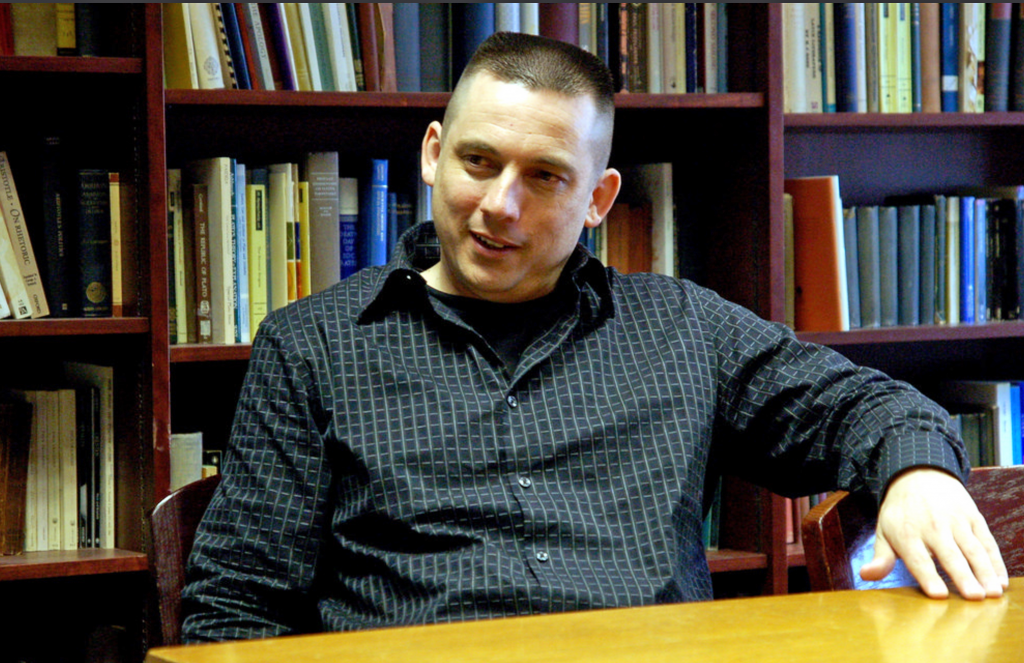 Professor Hall was an animated, enthusiastic, and committed teacher. He was one of the best lecturers I’ve ever had, and took every student’s ideas seriously. I’m shocked and saddened by his death, but also glad to have had the opportunity to be his student.Report

A bit of detail to color my generic claims: Professor Hall would often illustrate philosophical points by referencing — or even bringing to class — his parrot, Madeline Hall. This worked for issues ranging from animal ethics to the philosophy of color. (Apparently the micro-physical basis for a parrot’s color differs from that of other objects, and resembles Locke’s theory of color as resulting from the shape of particles.) Of course, Professor Hall’s lectures were great regardless, but the parrot lectures were special.Report

Professor Hall was my professor, philosophy honors adviser and mentor at Oberlin, where I graduated in 2013. He was assigned as my incoming student adviser and I spent the next 4 years falling in love with philosophy as a result. His classes (of which I took 8) were equally educational as they were entertaining, as his wit and creative mind never ceased to bring otherwise boring texts to life. He helped me pursue my legal career, urging me to challenge myself in law school and supporting me with letters of recommendation, and we have stayed in touch in the years since my graduation. I was horrified to hear about his tragic death. He will be missed by many. A brilliant philosopher, compassionate yet challenging mentor, and uniquely remarkable man. Rest in peace, my friend.Report

He was my philosophy professor for my first year at Oberlin College. His lectures were incredible–engaging and detailed. It was an honor to be his student and delve into philosophy with him. I will never forget his charisma and humor, and I especially enjoyed his personal anecdotes and stories about his pet parrot. Professor Hall will be missed deeply.Report

Professor Hall’s course on Environmental Ethics during my senior year was a catalyst in developing my passion and confidence for public speaking, which I am very grateful for. I will always remember that my fellow students were so inspired by his courses and gift to make philosophy come alive that they discussed and debated his ideas and lectures over meals and late into the night with a tremendous enthusiasm I had never witnessed before during my academic career. He was a great mind and he will be missed. Sending my prayers to his family during this challenging time.Report