The Pew Research Center yesterday published the results of a study showing that “a majority of Republicans and Republican-leaning independents (58%) now say that colleges and universities have a negative effect on the country, up from 45% last year. By contrast, most Democrats and Democratic leaners (72%) say colleges and universities have a positive effect, which is little changed from recent years.”

A more fine-grained look at the results suggest that older Republicans have a more negative view of higher education than younger ones: 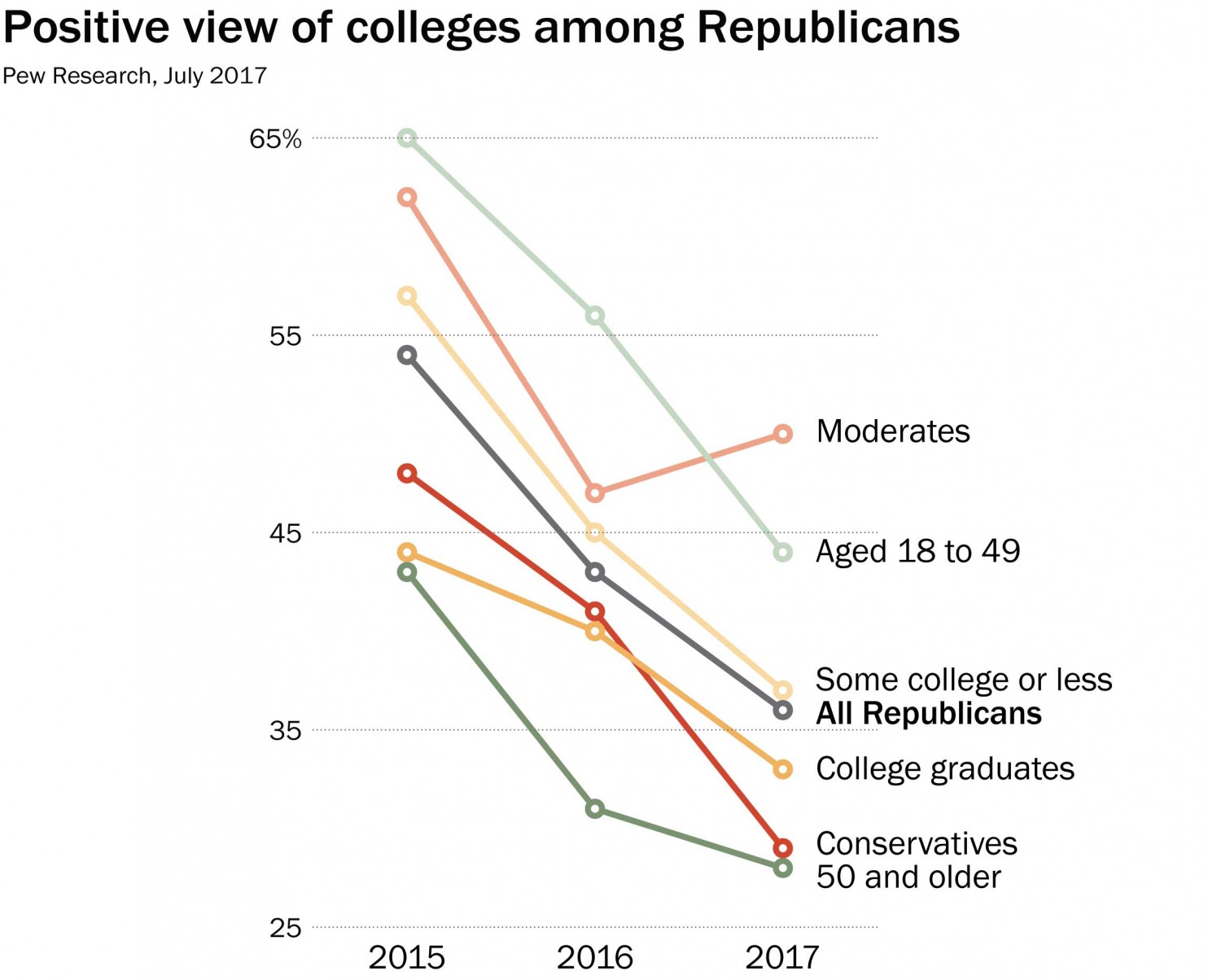 The study itself does not identify the causes of the negative view, though a few commentators suggest it is owed to recent media coverage, particularly in right-wing outlets, of colleges and universities that depict as bastions of political correctness or liberal bias.

For example, Philip Bump, in The Washington Post, offers this explanation of the data:

Why? Certainly in part because conservative media focused its attention on the idea of “safe spaces” on college campuses, places where students would be sheltered from controversial or upsetting information or viewpoints. This idea quickly spread into a broader critique of left-wing culture, but anecdotal examples from individual universities, such as objections to scheduled speakers and warnings in classrooms, became a focal point.

Clara Turnage, summarizing  in The Chronicle of Higher Education the views of Neil Gross, a sociology professor at Colby College, writes:

For years, higher education has been viewed favorably by liberals and less so by conservatives, Mr. Gross said, but political controversies in the past year have drawn attention and increased the negative perception. Protests and incidents of speakers being actively opposed or threatened by students are widely reported, he said, and are often one of the few ways in which the general population encounters college campuses.

There is a perception that Democratic elites are well-educated and Republicans are more of the common man… Colleges are simply seen as a production facility for Democratic beliefs and Democratic ideology.

What to do about this?

Dear academic colleagues on the right:

Don’t cooperate with the Fox News demonization of higher education.https://t.co/UR9tKMlU45

I think that advice applies across the board. It is not just some folks on the right that have cooperated with the narrative (which media of all stripes has an inventive to promote) of college campuses overrun by politically correct student-tyrants regularly shutting down or chilling objectionable speech, shepherding each other away from scary ideas into safe spaces, and trying to get faculty fired. Yes these things happen, but, to repeat myself:

we have to be careful here. A (defeasible) rule of thumb is that if you are hearing a lot about an event on the news or social media, it must not be that common (for if it were, then it wouldn’t be newsworthy). There’s also the availability heuristic to be on the lookout for, that is, “the tendency to judge the frequency or likelihood of an event by the ease with which relevant instances come to mind.” Also, let’s admit, it feels good to complain about stuff.

We should not be complicit with the conservative depiction of what colleges are like. That said, when we do come across actual problems that fit with that depiction, we need to be careful to not let political preferences overrun our better judgment.

NOTE: It has been a while since I’ve reminded readers of the comments policy. If your comment isn’t showing up, there’s a good chance it isn’t abiding by the policy.