I reproduce their comments, first printed in The Campanil, below.

The Board of Trustees is meeting today to make a decision on whether to go ahead with its plans.

I am Marc Joseph, Professor of Philosophy at Mills College. I have been a teacher at Mills for 18 years, and I will continue as a teacher unless you choose, on Monday, to violate the promise of tenure you made in 2005.

I have 180 seconds to explain the value I bring to Mills College – that’s ten seconds per year of service. We’re brought to this absurdity by a process that reduces my deep commitment and knowledge of Mills to three minutes, and I’m angry that I have been disrespected and treated in a manner that has been arbitrary, unethical, and imprudent.

It is arbitrary because the administration has contradicted itself. The Addendum to the Draft FSP (dated June 15, 2017) states that students who need a philosophy class will have to “pursue courses via cross registration,” but at a meeting with students on Monday, June 19, the Provost admitted that Mills itself will have to offer some philosophy courses. First, because 26 students are enrolled in Intro to Philosophy in fall 2017 – contradicting President Hillman’s oft-repeated claim that philosophy does not appeal to our current demographic – and second because, for example, the State of California mandates that our pre-nursing students take either Intro to Philosophy or Ethics. And the Provost keeps mentioning that the global humanities major incorporates philosophy courses.

Who will teach these classes?

The FEC has given you an alternative path to address the College’s financial challenges; you are ethically obligated to choose that path over this crazy and shameful path of firing tenured professors.

Finally, it is imprudent because the FSP harms the interests of the College. First, if you terminate me and my colleagues, Mills will be formally censured by the American Association of University Professors, and Mills will drop off the list of the 100 best colleges or the 50 best values – because an AAUP censured institution is not a best college or a good value. Professors and administrators in the Peralta system, and professors and administrators at Cal, will not collaborate with Mills, because if Mills breaks tenure, Mills will be a pariah.

Second, it is imprudent because the deliberative process by which faculty and departments were chosen is empirically invalid: dollar values and values to the curriculum were calculated in ways that violate basic principles of statistical reasoning. Do not believe that you are making the brave choice by breaking tenure and terminating me: it is the weak and foolish choice.”

My name is Jay Gupta, associate professor of philosophy.

Philosophy is often said to be a cornerstone of a liberal arts education. And there are powerful reasons why this must be especially acknowledged at a preeminent women’s college like Mills. I will quote from one of my colleagues at Wellesley, Smith, Mount Holyoke, and Bryn Mawr, who wrote a letter to President Hillman about the special role philosophy plays at a women’s college:

“Philosophy remains a male-dominated field, and women’s colleges are uniquely positioned to bring new voices to the discipline. More importantly, however, we occupy a political climate in which truth and reason are under assault, with particularly adverse consequences for women, people of color, and others who have been the subject of systematic injustice. Philosophy teaches students powerful skills that will enhance their ability to make a difference in the world, and women have an essential role to play in that mission. The dismissal of philosophy thus impoverishes both your students and our society. We urge you in the strongest terms to reconsider your decision.”

The FSP effectively proposes to eliminate philosophy from Mills College. There have been reassurances sent out to potentially affected students that they will still be able to take philosophy while at Mills, presumably in the form of cross-registration or courses taught by adjuncts. I urge the Board to recognize that this sort of plan cannot be a replacement for an actual program that has been carefully nurtured by tenured philosophy faculty committed both to vitality of Mills College and to teaching philosophy to its students. “Academic freedom” is often rightly cited in defense of tenure, but tenure is equally about continuity, coherence, and community. Marc Joseph and I for the last ten years have carefully developed the philosophy program, tailoring our courses to the specific needs of Mills women, always rethinking and revising, always striving to substitute what works for what doesn’t. We have sought to create a kind of philosophical ethos, a world that Mills women may productively inhabit during their time here, a world that fosters genuine communication and community, a world of thought and meaning that stays with them even after they have graduated.

That Marc and I have succeeded in creating such a community, one that survives and thrives past graduation, is attested to the numerous, passionate testimonies you have received by our former students, majors and non-majors alike. The systematically misleading focus by the Provost on numbers of majors obscures the strong, steady enrollments in our core courses, the many departments they serve, and the perennial interest in studying philosophy.

I respectfully ask the Board to be skeptical of the vague rhetoric attached to “MillsNext,” with phrases like “transformative educational opportunities” and the “changing needs of students.” What can these phrases mean if they involve the effective elimination of philosophy? To use an ugly word for an ugly thing, there is something nihilistic about eliminating, in one blow, a program that has been carefully nurtured and developed by dedicated faculty who have committed their professional lives to Mills, a program with a real history and community, a program that diverse Mills alumnae have avowed to be crucial to their well-being, empowerment, and productivity. If MillsNext is to be anything beyond an empty promise, it should not be possible to eliminate in one stroke the robust philosophy offering Marc Joseph and I have created. Thank you kindly for your consideration and attention. 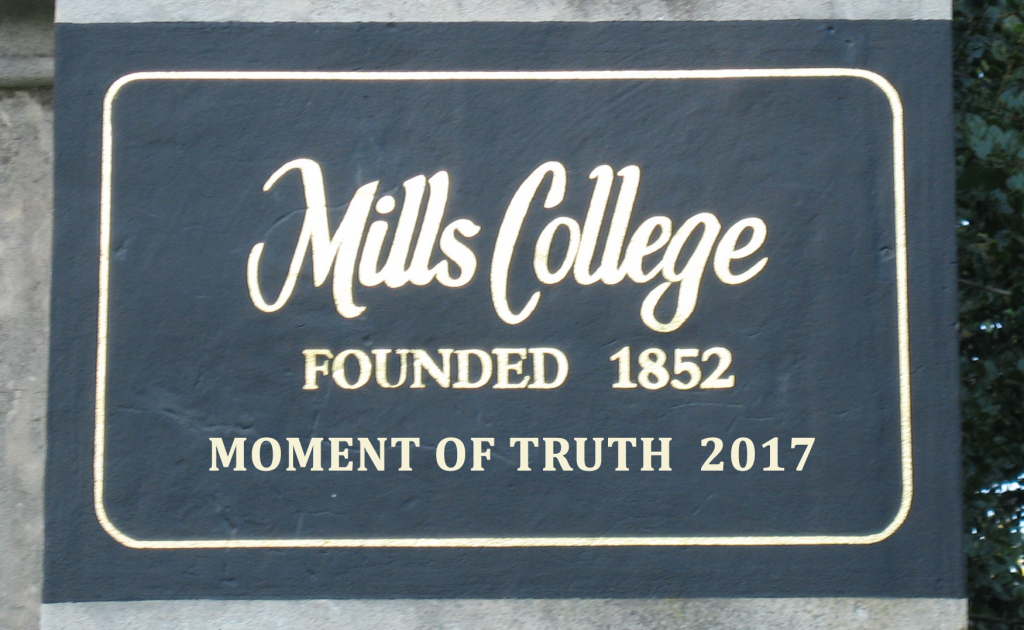 I understand the painful emotions involved, but the sort of bitter, accusatory, insulting stuff posted here has zero chance of working.

A serious plan as to how you might increase your majors and thus, your graduation rates might work, though. And I say this as someone at a school where our own department has been threatened with merger/diminishment/closure for virtually the entire time I’ve been here.Report

The Mills College Board of Trustees is in a closed session that will result in a vote regarding the ratification of the Financial Stabilization Plan, which includes cutting 11 ranked faculty–8 of them tenured, as I type. I can personally vouch for the comments made by these two philosophers, as I am a Mills alumna who has greatly benefited and continue to benefit from philosophy at Mills in exactly the ways they have described, and who has been tremendously supported by them since graduation. I cherish these professors and I am not alone.

The Faculty Executive Committee of Mills has proposed an alternative plan that would result in the same financial savings as the FSP and many other pragmatic measures have been taken to dissuade the administration and the BOT from ratifying the FSP. These testimonies to the BOT are just one piece of a much larger movement to stop the FSP that has been greatly contributed to by faculty, students, alumnae, and the wider community.Report

I am very glad to hear that more of a substantial case was made than that reflected in these two excerpted remarks. Here’s hoping it works!Report

The estimate of “zero chance of working” strikes me as a little low. The support cited for the estimate also seems a bit thin.Report

Do you have experience being in this situation? I do. Almost two decades worth. And I’ve been a department head trying to make the case for keeping our major and our department.

The truth cannot be “low.” (Well, it can, but the charge is irrelevant if one is actually trying to accomplish something, as opposed to just venting.) As I indicated, I am *very* sympathetic to the feelings involved. But that is not going to keep the department open.Report

I have no special expertise about the situation at Mills. I also doubt that you are an expert about the situation at Mills despite your experience at one very different college far away from Mills. An analogy: your experiences with hiring priorities at your department don’t make you an authority on hiring priorities at other philosophy departments.
There being a few similarities between your college and Mills is compatible with their being differences that matter. Such a confident assessment about what will and will not work at Mills seems unjustified.Report

Unfortunately, my experience was all too representative. The department has been closed.Report

“My name is X, and I plan on suing the shit out of you if you fire me. So I’d recommend keeping me and firing a more timid person.”Report

As a Mills alumna and philosophy professor, I’m equal parts furious and saddened about this development — I’ve been watching the developments unfold at Mills since the DeCoudreaux administration with increasing worry about the management and future of the college. The following press release dated June 27 states the Board of Trustees approved the revised Financial Stabilization Plan. https://www.mills.edu/news/2017/pressrelease-06272017-BoardApprovesRevisedFSP.php Those who know Mills history will recall that the MC Board of Trustees has in the past been convinced to reverse their decisions. I hope that history will repeat itself.Report

This is something I wish I’d have been wrong about.