Israel’s Minister of Education has proposed the adoption of a code of ethics for academics that some worry poses a threat to the academic freedom of professors there. The code was authored by Asa Kasher, the Laura Schwarz-Kipp Chair in Professional Ethics and Philosophy of Practice at Tel Aviv University.

According to Haaretz, the code would limit the political speech of faculty in the classroom, forbid them from calling for boycotts of Israel, and require universities to establish offices to monitor the political activity of faculty and staff.

Many academics in Israel opposed the idea of a government sponsored code of ethics even before the details of the proposed code were publicized.

The Israel Democracy Institute released a statement objecting that “the code was written by an individual rather than through discourse with professors at Israel’s various institutions of higher learning” and that it “undermines the autonomy of these institutions in violation of the Law of the Council for Higher Education.” Additionally:

The ethical code that is being proposed unreasonably expands the definition of what is political. The definition does not differentiate between political and the public, between political and ethical, and between systematic preaching and free discourse. Political activity, according to the proposed ethical code, includes all direct support or opposition to ‘a particular point of view in a recognized public dispute’. Thus, the proposed code refers to many questions of economics, ethics, law, and political morality as political and calls for their removal from academic discourse.

I tried to obtain a copy of the code’s text to see whether the characterizations of it were accurate and the objections reasonable. Unfortunately, the only version available (sent to me by Professor Kasher) is in Hebrew, which I do not read [note: see update for translation]. If you do, you can read it here (and consider yourself encouraged to make an informed comment on it, or provide translations of the relevant passages).

Professor Kasher, who is also the author of the Israel Defense Forces’ Code of Conduct, has not yet answered a request for a response to critics of the proposed code (though that request was made rather recently). If he does send me a response, I will post it as an update here.

(Thanks to Ron Salzberger for emailing me about this news.)

UPDATE: Alon Harel at Hebrew University has kindly provided an English translation of the proposed ethics code. You can access it here.

Of particular interest to readers throughout will be the emphasis it places on activities which can “naturally be interpreted as tainted with considerations of political kinship,” and the taking of various steps to avoid that appearance. Additionally, towards the tend of the document, are the following proscriptions on faculty behavior: 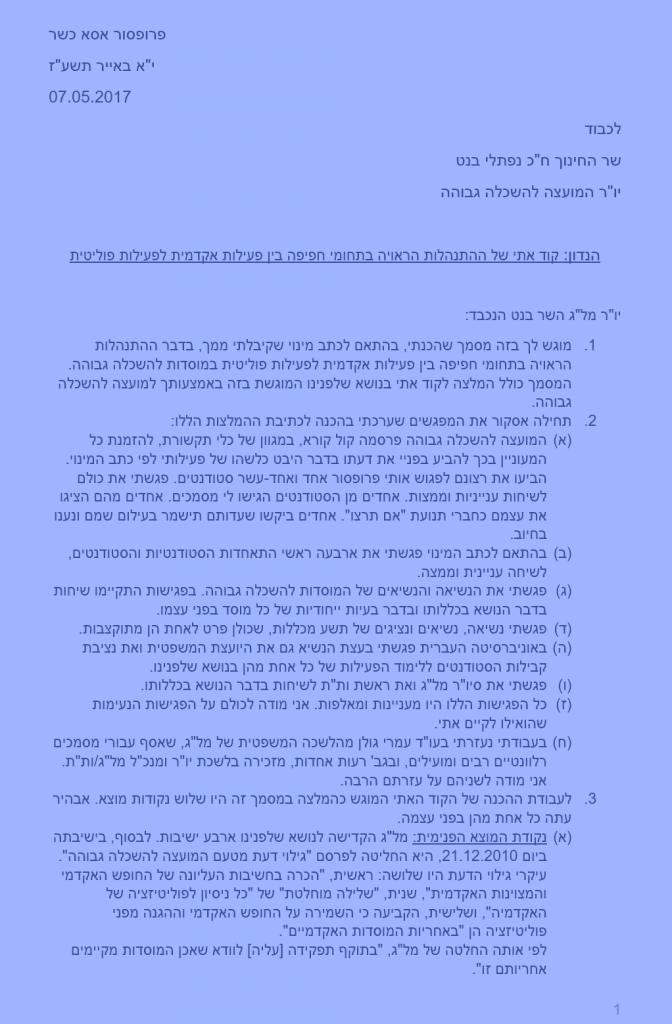