In the wake of news reported last Wednesday that the administration and Board of Trustees of Mills College plans to eliminate the school’s philosophy department and fire its tenured faculty, a petition has been launched to “Uphold Principles of Academic Freedom and Preserve the Philosophy and Journalism Departments at Mills College.” 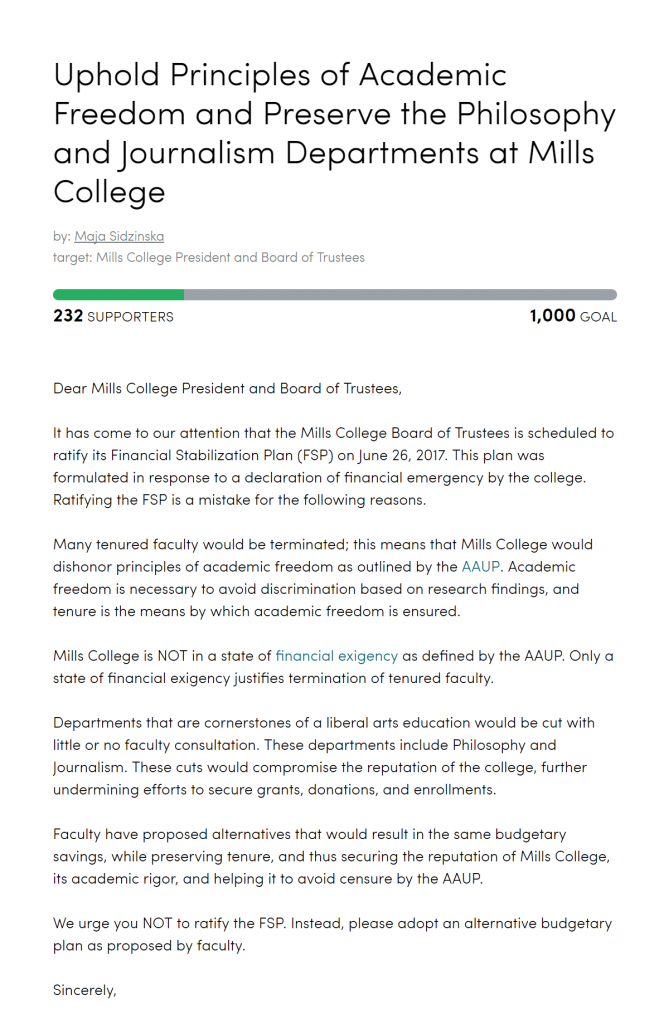 The letter says it all; please reconsider.Report

I wish the case was stronger, but it strikes me as rather weak.

We are p[persistently under similar threat for being a “low completer program.” At our university, that means having fewer than 10 people a year graduate with a degree in philosophy. From what I understand, at Mills, the number is closer to 1 or 2.

There has to be *some* point at which sustaining a department and a major no longer makes sense, and it seems to me that when you are at the point when you are graduating nearly zero students a year, you’ve reached that point — especially if the school in question is in financial trouble.

At our own university, even though we have a Major and Minor, the overwhelming amount of philosophy taught to students is in General Education. Realizing this, we have put a great amount of emphasis on our Gen Ed instruction, and have managed to get three different courses into the Gen Ed curriculum: Introduction to Philosophy; Ethics and Contemporary Issues; and Critical Thinking. So even if we lost our Major or worse, our department, students across campus would still have the opportunity to learn philosophy, as a part of their general education.

It’s certainly not ideal, but it is the current reality. What was once an education for a small portion of the population has become a system of mass education, and there are certain fiscal realities that come along with that.

Best of luck to the people at Mills, and I hope you are successful.Report

@ Daniel Kaufman: the philosophy faculty at Mills have offered a number of alternative ways to redeploy its philosophy courses, for instance in service of general education requirements, as well as suggested other interdisciplinary strategies. This has been ignored by the administration for no apparent reason. (But tenured faculty in “high-completer” departments are also slated to be cut, which suggests the reasoning behind which faculty to cut is rather poor.)

You note that, “What was once an education for a small portion of the population has become a system of mass education, and there are certain fiscal realities that come along with that.” But Mills is quite a small college; its very scale doesn’t lend it to the types of calculations required by larger institutions. Resisting the application of corporate principles to education, especially one that is claimed to be a liberal arts education, is exactly part of what is at stake.Report

It’s also just hard to know what to make of petitions that are written with such a clear partisan bias. Do we have any reason to believe that this letter credits the administration in the most charitable light? How are we all supposed to have the expertise to assess the merits of Mills’ budget? Or that we’re supposed to blindly endorse the “faculty budget” mentioned in the letter as against the administration’s? It just strikes me as particularly ironic that this sort of uncritical herd mentality is so common in our discipline, one so concerned with critical thinking.

Here are some things that would be useful if we seriously think the broader community has any epistemic role to play in any of this. First, links to the rest of the discussion (i.e., documents, letters from administration, etc.). Second, links to the administration’s proposed budget, the faculty’s, or whatever else. Third, analysis by someone who doesn’t work for the department, graduated from the department, or works for the AAUP, unless those perspectives are balanced by the strongest version of the alternate view. (As it stands, we’re just getting one side of the story, with about 2% of the total available information.)

It would also be useful to have a serious conversation about what sort of departmental closure it might take for the pro-petition crowd to not write a petition. In other words, I think the movement loses its credibility by *always* proposing a petition, every time any department is threatened with closure. Say this one has zero majors; that’s at least plausibly a prima facie (i.e., defeasible) justification to close the department, I’d think.Report

@ Jon: I wrote the petition. I am a Mills alum, now a philosophy grad student, and a future tenured professor hopeful. I didn’t intend the petition to be neutral with regard to the issues at stake, which are not exhausted by the potential closure of departments, but also have to do with cutting tenured faculty–a “biased” interest to the extent that an interest in academic freedom is biased. Of course, my personal interest is that cutting tenured faculty doesn’t become even more of a norm. The interest of the broader community might be to continue to make liberal arts education possible in the face of market forces that might undermine it.

Because Mills is a private non-profit, many of its financial documents are public (accessible for instance via Guidestar.org). I haven’t reviewed the numbers since 2012, but I don’t think the current financial story bodes well for the administration as far as the extent to which its proposals are justified.

Furthermore, an independent financial review WAS conducted by an external auditor hired by Mills faculty in 2016 for the purpose of independent financial assessment. His findings were in line with the suggestions of the Mills economics faculty, which were to shift the Mills endowment to passive management. This, in hindsight, would have earned the college interest on its endowment that put it in the black (and then some). Such a measure could still be taken. For some reason the administration is not listening.

Petitions may have received a bad rep of late, but what may be called “herd mentality” by some may also be called ORGANIZING by others.Report

Thank you for doing this!Report

Academic freedom? Give me a break. The term, properly used, refers to schools who are trying to control controversial topics. It is the freedom to make course choices, not the freedom to be paid to teach. Shutting down a department or generally firing a tenured professor for financial reasons is an economic issue, not an academic freedom issue.

That claim should be an embarrassment. Frankly the tendency of professors to overuse the “academic freedom!” card whenever they dislike an outcome is losing them a lot of support.Report

If these small liberal arts(-themed) schools are willing to sacrifice education for other things, I really have to wonder what the point of staying open is. If churning out the most degrees for the least money is the goal, surely massive state schools get the job done much better.Report

In addition to targeting philosophy Mills college is apparently firing one of the leading musicians and composers of our time. Given Mills’ importance in the history of music I wonder what could be their reasoning beyond not wanting to pay Mitchell?