Peter Kivy, Emeritus Professor of Philosophy at Rutgers University, has died. A prolific philosopher of art, literature, and especially music, Professor Kivy had over 20 books to his name. 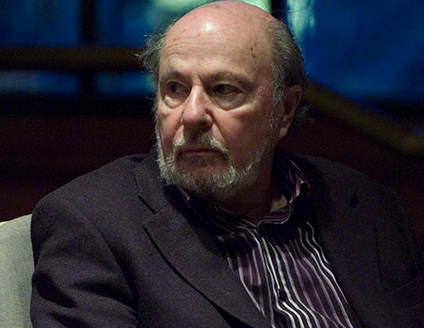 In an interview with Richard Marshall at 3:AM Magazine, Professor Kivy describes how he came to study philosophy, and aesthetics in particular:

Now when I made the decision to do aesthetics, or, rather, when the decision was made for me, I never in the world intended to combine it with my musical interests. Indeed, who in philosophy of art would have dreamed of such a thing in 1960?

When he published his first book on the philosophy of music The Corded Shell, what was supposed to be “a brief interlude between serious philosophical projects” became, he says, “the defining event of my career for many years to come.”

Professor Kivy earned his PhD from Columbia in 1966 and for all but one visiting year at UC Santa Barbara spent his entire career at Rutgers.

UPDATE: Larry Temkin, chair of the Department of Philosophy at Rutgers, has sent in a statement on behalf of the department:

On behalf of the entire Rutgers Philosophy Department, I sadly note that our dear friend, and former Board of Governors Professor of Philosophy, Peter Kivy, passed away last Saturday night.  Peter had been very ill for some time, but even so, this news is a great blow to all who knew him.

After earning a BA and MA in Philosophy from Michigan in Philosophy, an MA from Yale in the History of Music, and a PhD in Philosophy from Columbia, Peter taught briefly at Brooklyn College, before moving to the Rutgers Newark campus in 1967. In 1978 Peter moved to the Rutgers New Brunswick campus where he remained until his retirement in 2015.
Over the span of his 49 year career, Peter’s countless lectures, 90 articles, numerous reviews, and 23 books—including 18 single-authored books published with Oxford University Press, Cambridge University Press, Princeton University Press, and Cornell University Press, many of which were translated into Chinese, Italian, Portuguese, Spanish, and Korean—established Peter as a giant in the field of aesthetics, and as the world’s greatest Philosopher of Music. Peter’s books were known for their clarity, insight, and depth of understanding, as well as their biting criticisms and sarcastic wit. Peter often commented on how much he loved to write philosophy. Indeed, Peter’s zeal for writing philosophy was almost an addiction, and he would become noticeably upset if he hadn’t written anything for a few days.
Peter’s many honors and awards included a Guggenheim Fellowship, The Deems Taylor Award of the Amercian Society of Composers, Authors, and Publishers for the best book on music (The Corded Shell), an Honorary Doctorate of Music from Goldsmiths’ College of the University of London and, most recently, the prestigious 2016 American Society for Aesthetics Monograph Prize for his book De Gustibus:  Arguing About Taste and Why We Do It (OUP, 2015).
Peter was a real mensch.  He had a great sense of humor and a big heart, especially, for the many students that he mentored over the years in both Philosophy and Music.  (I know first hand what a powerful role he played in the life of his students, for he played such a role for my own son, Daniel, who took three courses from him as a music major in the Mason Gross School of the Arts.)  Peter was rightly proud of the fact that a number of philosophy graduate students landed jobs in part because they developed a competency in aesthetics under his guidance.

Peter was an erudite scholar and lover of music, who kept a clavichord in his Philosophy Department office.  He was also an accomplished oboist who studied under tutelage of the great Ronald “Ronnie” Roseman, a faculty member of the Mannes College of Music, the Julliard School, and the Yale School of Music, and acting principal oboist of the New York Philharmonic in the late 1970s.  Peter played the oboe with many groups in many venues in New York City as well as Cape Cod where he took up summer residence.

Besides writing philosophy and playing the oboe, Peter loved a great scotch and Manhattans (or two!).  He was a cherished member of the Department, and a personal friend.  I shall miss his endless supply of jokes, and dinners at Tumulty’s Pub with him and Peter Klein.

Peter is survived by his beloved wife, Joan Pearlman.  In accordance with Joan’s wishes, no flowers please, although your thoughts, cards or emails would be much appreciated.  If you would like, please make a donation in his name to your favorite charity.  Joan’s email address is:  [email protected].  Her regular address is:

Peter was a member of the first inducted class of 2016, of Trailblazers and Mentors, in grateful recognition for his loyal service and outstanding contributions to the Rutgers Philosophy Department and its students.  He will long be remembered, and sorely missed.

UPDATE 2: A remembrance of Kivy by Aaron Meskin (Leeds).

Peter was my dissertation advisor when I was a grad student at Rutgers. He was a wonderful philosopher, teacher and mentor. His contributions to aesthetics will remain definitive. I have no doubt that Peter contributed to the resurgence of interest in aesthetics in recent years. His loss will be felt by many across the world. I am privileged to have known him, and mourn his passing. Condolences to Joan and his friends & family.Report