Last year, Valerie Tiberius, professor of philosophy at the University of Minnesota, conducted what she called “The Value of Philosophy Survey.” Over 2,500 philosophers responded to the survey, which asked 24 questions, and in her Presidential Address at the Central Division meeting of the American Philosophical Association (APA) last month, Professor Tiberius discussed the results.

You can read the full text of Professor Tiberius’s address at the Blog of the APA, and some initial discussion of it at PEA Soup. It’s a wonderful piece in which she addresses the discipline of philosophy as a friend in need of assistance, and the survey as the start of a helpful conversation:

I started thinking… what if PHILOSOPHY were my friend?  I might worry.  Philosophy, what are you doing with your life?  You’re in the news, and not in a good way. As I would do if I were approaching an individual friend in need of help, I wanted to know: what are your values, philosophy?

Her conclusion is that philosophy wants to “broaden and balance”:

After reviewing the data from the survey, I’m in the position of someone who has just finished a very long conversation with my struggling friend about her values.  I might venture to articulate a path forward.  So here’s my advice Philosophy: what I think you really want is to broaden, to open up, to become a more welcoming field, without losing what makes you you.  You don’t want a radical transformation; you want to be less isolated and narrow than you have been in the past, not by rejecting your past but by achieving a balance between valuing the old and the new.  That is the theme of the rest of the talk:  “broaden and balance”.  In short, the message of the talk is that our values will be fulfilled by broadening our community and our conception of what counts as philosophy, and by balancing our attention and rewards between traditional and non-traditional approaches to philosophy.

The survey results show overwhelming support for the idea that diversity is important to academic philosophy. On a scale of 1-7, mean ratings approving of various forms of diversity were well above 5: 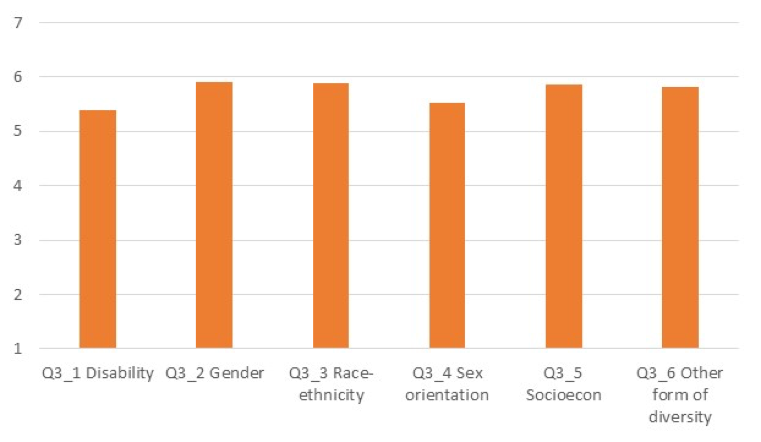 An open-ended question on the survey asked respondents for further comments they had on diversity. Of the 580 who chose to provide comments, only 25 registered opposition to increased diversity in philosophy.

Public conversations, especially online, can sometimes give the impression that philosophers are divided over the importance of diversity in the profession. The survey results suggest that this impression is mistaken, the result of a tiny, if vocal, number of people. The often pseudonymous and anonymous (and so practically uncountable) commenters expressing opposition to diversity have a view that is very much in the minority.

Professor Tiberius notes that the survey results suggest that while diversity is among the values of the philosophy profession,

we tend to have somewhat less strong support for specific strategies for promoting our values than we do for the general idea that these values should be promoted.

It could be that disagreement over specific strategies also has served to obscure the more consistent support among philosophers for diversity in the discipline.

We found that the survey responses displayed a conspicuous pattern, with respondents more strongly in favor of traditional approaches when it came to education (both graduate and undergraduate) than in philosophical research. 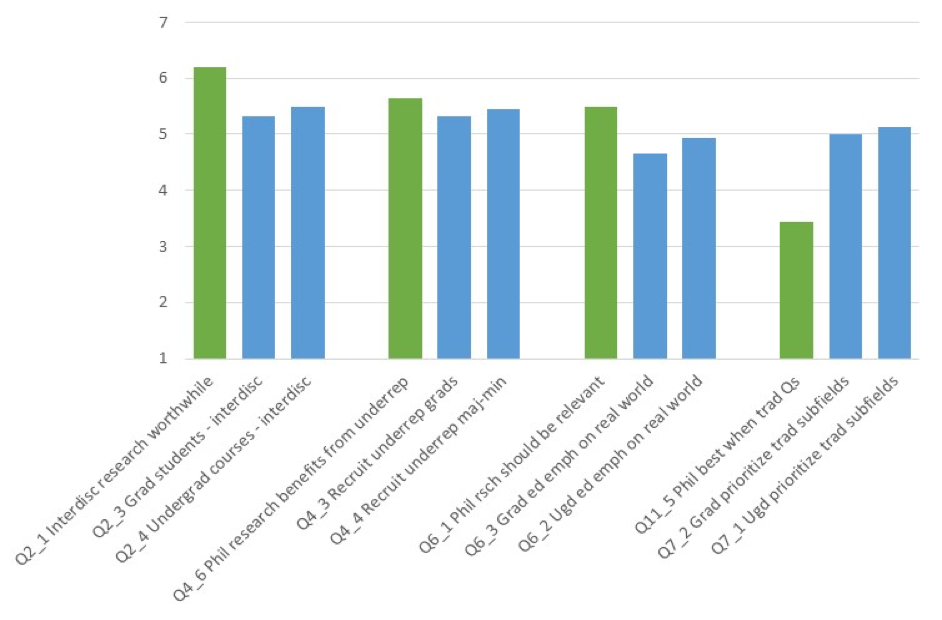 At the same time, that these were seen as relatively less important when it comes to educating students. In that domain, philosophers favored a greater emphasis on traditional subfields. Professor Tiberius writes,

Perhaps (and this was suggested in some of the open ended responses) these results are explained by philosophers thinking that we need a foundation of certain skills, distinctions, theories, and arguments before we should be encouraged to do creative work that engages other fields or challenges aspects of our tradition.

There were other topics covered by the survey which I may address in subsequent posts. You can read (and listen to) Professor Tiberius’s full presidential address here.